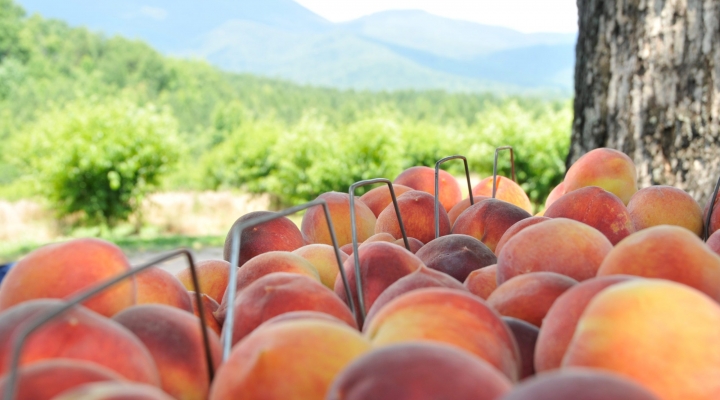 During the annual Ridge Peach Producers Meeting in Edgefield, South Carolina, Peach Team members briefed growers on how to attack these pests. One discussion was what growers can do now that the insecticide chlorpyrifos has been banned for use on food crops. Brett Blaauw, professor and Extension specialist with the Clemson Cooperative Extension Service and the University of Georgia Extension Service, said changes in management practices can help growers compensate for the loss of this tool. (photo by Clemson University)

CLEMSON, S.C. — The Palmetto State is home to some of the best peaches in the southeastern United States.

But pleasing the palate is not the only role peaches play in South Carolina. The peach industry also is a major contributor to the state’s economy. To help keep the industry growing, the Clemson University Cooperative Extension Service Peach Team is researching how to keep pests at bay, as well as how using new technologies can help protect peaches.

During the annual Ridge Peach Producers Meeting in Edgefield, South Carolina, Peach Team members briefed growers on how to attack these pests. One discussion was what growers can do now that the insecticide chlorpyrifos has been banned for use on food crops. Brett Blaauw, professor and Extension specialist with the Clemson Cooperative Extension Service and the University of Georgia Extension Service, said changes in management practices can help growers compensate for the loss of this tool.

“Chlorpyrifos was commonly recommended for use as a tank mix with horticultural oil to apply in late winter for delayed dormant timing to manage San Jose scale and lesser peach tree borer,” Blaauw said. “During post-harvest, usually late summer, chlorpyrifos was commonly used as a trunk spray to provide more insect pest management. With the ban on chlorpyrifos, growers will need to replace those sprays with different chemicals or management tactics, such as mating disruption for borers.”

Chlorpyrifos is an inexpensive, but effective insecticide widely used in agriculture for more than 56 years. It is a broad-spectrum insecticide first registered for use in 1965 and kills insects by affecting the nervous system. The Environmental Protection Agency banned the use of chlorpyrifos on food and feed crops in August 2021.

“On the plus side, the pheromone dispensers last all season long and help manage both peachtree borers and lesser peachtree borers,” Blaauw said. “EPNs can be applied with the same equipment as used for trunk sprays, but because the EPNs are living creatures, they need moisture to survive, so applying the EPNs to irrigated trees is ideal.”

Unlike chlorpyrifos, EPNs can be applied preventatively, as well as curatively to already damaged trees.

While the loss of chlorpyrifos is frustrating, Blaauw told growers it is still encouraging there are alternative, effective methods for control of San Jose scale and the borers. See the Southeastern Peach, Nectarine and Plum Pest Management and Cultural Guide for more information.

“In the meantime, you can be assured tree fruit entomologists like myself are going to continue to research new management tactics for these pests so that we can guarantee the best management practices for you and other growers,” Blaauw said.

“There are a lot of nematodes in the soil,” Khanal said. “About 10% of these are dangerous.”

Common symptoms of nematode attacks include peach tree short life and dieback. Of special interest is the peach root-knot nematode. This pest was found in one upstate orchard in 2018. Clemson researchers are conducting surveys to determine how much of this nematode exists in South Carolina orchards.

Bacterial spot is another disease Clemson peach researchers are studying. This disease is caused by the bacterium Xanthomonas arboricola pv. pruni (Xap). It begins as twig cankers in the spring and spreads to leaves and fruit as the season progresses. Symptoms on green fruit include water-soaked lesions, while symptoms on maturing fruit vary from light speckles to deep crater lesions. Leaves also are affected and show yellowing starting at the tip. Severe leaf infections can cause early defoliation resulting in reduced fruit size, sunburn and cracking.

Hehe Wang, a Clemson plant bacteriologist, said this bacterial pathogen is difficult to control because most commercial peaches are susceptible and the limited number of disease-tolerant/resistant cultivars could develop symptoms during high-infection periods. In addition, there are no cultural controls available and chemical control options are limited.

Wang is conducting research towards development of novel and more effective control options for integrated management of bacterial spot. New control options, including a spray program, are being studied.

Armillaria Root Rot is another pest threatening South Carolina orchards. The only way to control it is to start over in a new area where the soil is not infected.

“Armillaria root rot is costing growers a lot of money,” said Ksenija Gasic, peach breeder and geneticist. “Growers with infected orchards face persistent problem, as both the host and the disease are long-lived. Producers cannot rotate to other sites due to the lack of uninfected land for new plantings. They cannot fumigate the soil and once an entire orchard is replanted, they are left with the prospects of having to replant again not long after having invested in the high orchard establishment costs. So, what can we do?”

Planting peach trees in shallow engineered berms with the top parts of roots exposed above ground to extend the productive life of trees is one practice growers can use. Developing disease-resistant rootstock varieties is another option which Gasic and the Peach Team are working on. But they need growers’ help.

“We want to engage growers in our research,” she said “This helps us better understand what South Carolina growers want and how we can help them get what they need to grow more productive crops.”

In addition to protecting their crops against pests, growers also learned about a new agricultural innovation from Washington State University that researchers believe may help protect crop plants from freeze damage at bud break.

The Washington State method uses cellulose nanocrystals to insulate buds against frost damage. Juan Carlos Melgar, a Clemson associate professor of pomology, said a study using this technology is being conducted at Clemson’s Musser Fruit Research Center. Melgar’s study focuses on the fruitlets, or small fruits, that appear after pollination. The nanocrystals are applied during early spring when cold snaps can occur and damage fruitlets.

“Fruitlets are coated with these nanocrystals,” Melgar said. “The nanocrystals act as tiny baby blankets, protective layers, that shield fruitlets from frost.”

Melgar also said researchers are getting closer to understanding what causes bronzing, a peach skin disorder that can lower the value of a crop. It is cosmetic and damages the skin, not the flesh. Still, peaches with this disorder often are difficult to sell.

“We believe bronzing could be caused by nutrient imbalances” he said. “Nutrient analyses showed areas with bronzing contain higher amounts of magnesium and an imbalanced magnesium/potassium ratio. Our recommendations include checking your soils and especially your leaf tissues to determine the nutrient status and keep nutrients balanced.”

Soil tests can be conducted at the Clemson Ag Service Lab. For information, go to https://bit.ly/CU_SoilTestLab.

The peach was named the official State Fruit by South Carolina Legislature Act Number 360 of 1984. South Carolina grows more than 30 varieties of peaches and ranks second in fresh peach production in the United States behind California. Peaches have been commercially grown in South Carolina since the 1860s.

With a combined production value of more than $140 million, peaches are a major contributor to agriculture in South Carolina and Georgia.

Peaches are grown on farms across South Carolina. A list of farms can be found on the South Carolina Peach Council’s website: https://scpeach.org/growers/. They are sold from U-Pick Farms, roadside stands and farmers’ markets.