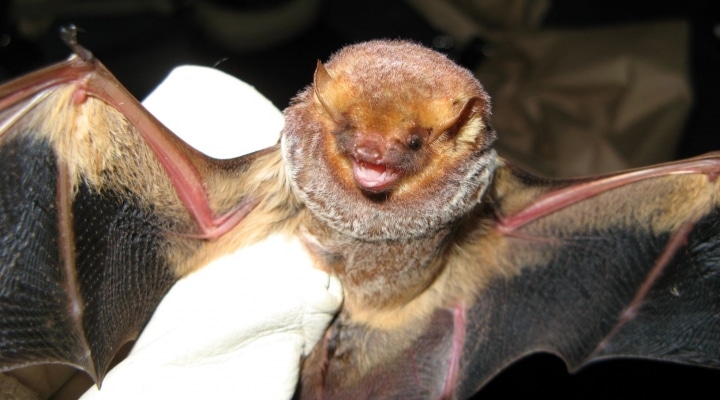 All bats in the Southeast eat insects and feed at night. They eat a varied diet, including mosquitoes, beetles, moths and more. Their pest-control services are estimated as high as $53 billion per year in the United States.

Aside from controlling nuisance insects, some bats feast on insects that eat crops, Ober and her research team found in a newly published study. One of those species alone causes $350 million a year in crop damage. Another causes $1 billion a year.

For the study, published in the journal Agriculture, Ecosystems and Environment, Ober led a group that studied 180 bats in north Florida, south Georgia and south Alabama. Researchers found that the three most common bat species voraciously ate insects that otherwise cause major economic damage to several crops. In fact, 61% of the bats studied ate at least one agricultural pest.

Harnessing the natural pest-control power of bats would help farmers and ranchers, said Ober, a UF/IFAS professor of wildlife ecology and conservation.

“Research like this had been done in other regions of the country and other countries, but until now, we were guessing as to whether the bats here might play a role in pest consumption,” she said. “This study demonstrates not only that bats in this region eat pests, but that nearly all bats do so, and that these bats consume pests to a variety of crops.”

This data can be crucial for growers trying to control the pests that prey on their produce and row crops.

Because many kinds of bats roost in trees with cavities or peeling bark, farmers and ranchers can encourage the presence of bats by retaining or planting large trees in non-crop areas, said Ober, a faculty member at the North Florida Research and Education Center in Quincy. In circumstances where this is not possible, bat houses can be installed as a substitute.

The DNA sequencing is a giant step for researchers. Years ago, scientists would collect bat guano, look at it under a microscope and guess what types of insects were present by looking for diagnostic parts, for example, beetle claws and fly antennae, Ober said.

“Recent advances in technology allow us to determine the identity of insects to species, which allows us to say definitively that ‘Bat Species A’ consumes ‘Insect Species Z’ in ‘Location X,’” she said. “Therefore, we are now confident in stating that bats here are providing a valuable, though invisible service, consuming crop pests.”