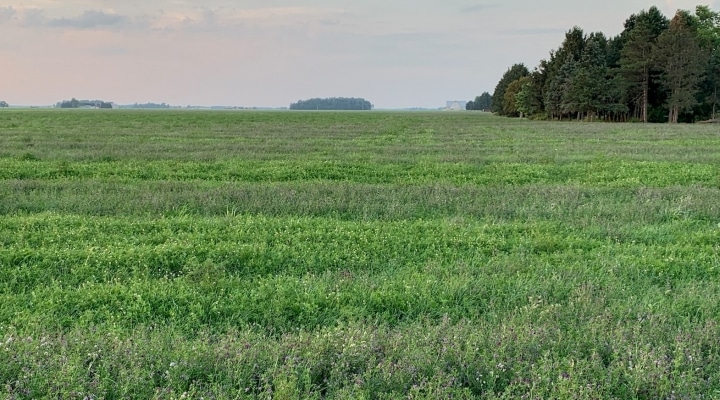 Berseem clover is a good option to improve alfalfa stands without autotoxicity from older alfalfa plants. The light green plants in this photo are berseem clover used to renovate an alfalfa field suffering from winterkill. (Courtesy Photo)

SHREWSBURY, England — For alfalfa producers needing to renovate fields suffering from winterkill or looking to increase the quality and yield of this season’s hay crop, improved cover crop varieties are a viable solution.

Take berseem clover, for example. The synergistic relationship between berseem clover and alfalfa make the legume an effective companion crop due to its rapid summer growth, notable nitrogen fixation and similar appearance. Research in Saudi Arabia found a seeded mixture of 80 percent alfalfa to 20 percent berseem clover to significantly improve the quality and yield of forage. Here in the USA, GO SEED has seen similar results, with berseem clover and alfalfa companion crops yielding more than 4 tons of dry matter per acre on a two-cut system while maintaining a crude protein content of 20.5 percent. Berseem clover also fixed 150 pounds of nitrogen per acre while providing a non-bloating forage for livestock.

Along with quality and yield benefits, berseem clover also helps alfalfa producers improve stands without autotoxicity from older alfalfa plants. In order to squash out any competition for water, nutrients and light, older alfalfa plants have a built-up defense mechanism to produce chemical compounds that are lethal to new alfalfa plants. As one of my college professors once explained, this reaction is like taking a Harvard grad and throwing them into the meanest streets of the ghetto – the chances of the new plants making it is pretty slim.

While berseem clover sounds like a silver bullet for alfalfa producers, applications of the cover crop have been limited for growers in cooler climates due to it being the least winter hardy of annual clovers. However, this comes with the exception of Frosty Berseem Clover, an improved variety specifically developed to thrive in temperatures as low as 5 degrees Fahrenheit and zero snow cover.

This has created two new application opportunities for producers. When stands begin to get weak in the late fall, this improved variety can be interseeded to alfalfa stands with a strong chance of surviving the winter.

More uniquely, its cold tolerance makes it suitable for frost seeding. Preferably during periods of no snow cover, seed is broadcasted onto the frozen surface of the soil. As soil follows a freezing and thawing cycle, seed will work into the top 0.25 inches of soil. Since the clover seed can germinate and start growing once the weather becomes favorable instead of having to wait until soil firms up enough to get drilling equipment into the field, frost seeding can increase establishment. For this very reason, frost seeding also extends the growing season and can be a more convenient management option.

Keep in mind, introducing a new species to your alfalfa stand will come with management considerations. While alfalfa stores its energy in the root, berseem clover stores its energy in the base of the plant. This means cutting too low can impact the ability of berseem clover to recover and regrow. We recommend the swather be set 3-4 inches off the ground. Berseem clover also tends to take longer to dry down than alfalfa, which can be bypassed by spreading wind rows out a bit further.

Whether the benefits from the synergistic relationship between berseem clover and alfalfa has piqued your interest, or you simply are after something to renovate a field suffering from winterkill, remember to select varieties with traits that will perform in your unique environment and management system.

Debunking the 'Yield is King' myth