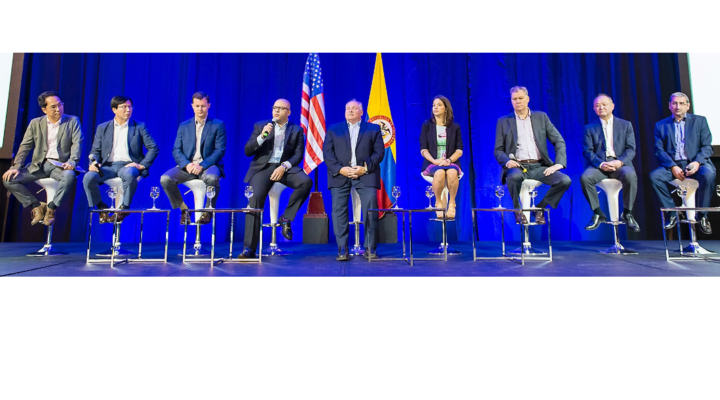 The event’s general sessions included an update on the U.S.-Colombia Free Trade Agreement (FTA) by Minister Andres Valencia Pinzon from Colombia’s Ministry of Agriculture and Rural Development and the latest news on the status of U.S.-Colombian relations from Philip Laidlaw, deputy chief of mission, U.S. Embassy in Colombia.

Laidlaw’s presentation was followed by a panel of Colombian industry executives including Jorge Bedoya, president, Sociedad de Agricultores de Colombia; Juan Jaramillo, vice president of purchases and logistics, Solla Animal Nutrition; Augusto Solano Mejia, executive president, Asocolflores; and Ron Gray, USGC past chairman, who offered their perspectives on the impacts of the U.S.-Colombia FTA. The panel was moderated by USGC Director of Trade Policy and Biotechnology Floyd Gaibler, who worked closely with Colombian partners during the FTA approval process.

“Hearing from the high-level U.S. and Colombian officials as well as a broad group of industry participants illustrates to attendees the breadth of our work in the Colombian market and how our international staff in Colombia work hand-in-hand with the U.S. government on behalf of U.S. grains,” said Jim Stitzlein, USGC chairman.

“The Western hemisphere in general, and Colombia specifically, holds so much promise for U.S. corn, value-added products and ethanol, and we are here on the ground to capture and grow that potential,” Tejada said. “With the help of USDA’s Market Access Program (MAP) and Foreign Market Development (FMD) funds, and now Agricultural Trade Promotion (ATP) program dollars, we hope to see commensurate growth in all markets in the region.”

The afternoon also featured a recognition of USGC Colombian consultant Jaime Cuellar who has spent more than 20 years in Colombia and Latin America working on various projects for the Council and who shared his perspective on how the country became a major feed grain importer.

Attendees at the meeting also heard from National Corn Growers Association (NCGA) CEO Jon Doggett and Mexico international affairs expert Gabriel Guerra Castellanos on the future of U.S.-Mexico relations and the road to ratification of the U.S-Mexico-Canada Agreement (USMCA). Mexico is the top importer of U.S. grains in all forms, the largest buyer of U.S. corn, barley and distiller’s dried grains with solubles (DDGS), a large buyer of U.S. sorghum and a significant potential market for U.S. ethanol.

The agenda culminated with a Board of Delegates meeting with reports from each of the seven USGC Advisory Teams (A-Teams) as well as five commodity sector reports with ideas to help continue expanding U.S. exports of corn, sorghum, barley, DDGS and ethanol.