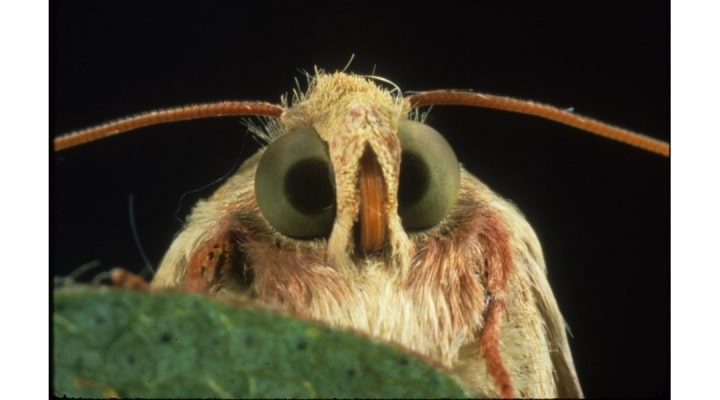 Releasing infertile adult pink bollworm moths from airplanes by the billions to disrupt reproduction of moths in the wild was an important factor in eradicating this pest in the U.S. in 2018. (Photo: Agricultural Research Service-USDA)

MARICOPA, Ariz. — Genetically engineered cotton and classical pest control tactics combined to rid the United States and Northern Mexico of a devastating pest, according to a new study by Agricultural Research Service (ARS) and University of Arizona (UofA) scientists published in the Proceedings of the National Academy of Sciences.

A coordinated and multitactical list of areawide and integrated pest management strategies were developed over the years in hopes of putting down this pest while replacing expensive and environmentally hazardous chemical pesticides, explained research entomologist Jeffrey Fabrick, one of the authors of the study. Fabrick is with the ARS-USDA Pest Management and Biocontrol Research Unit in Maricopa, Arizona.

“By analyzing computer simulations and 21 years of field data from Arizona, we proved that genetically engineered cotton and release of billions of sterile pink bollworm moths acted synergistically to suppress this pest,” Fabrick said.

Both the computer simulations and what was seen in the field from 2006 to 2010 showed neither of the two tactics would have worked if used alone, he added.

“Collaboration among farmers and scientists from government, industry, and academia was essential for the remarkable success of the pink bollworm eradication program,” said Bruce Tabashnik, lead author of the study and regents professor in the UofA Department of Entomology.

In the late 1960s and 1970s, ARS scientists first began powering up the fight against pink bollworm. They helped create the artificial pheromones that allowed precise tracking of the pest as well as the first synthetic diet and methods for raising sterile pink bollworm moths to disrupt mating. Releasing synthetic female sex pheromone in cotton fields also was used to confuse males and disrupt mating Another important tactic required farmers to plow down cotton residues after harvest to reduce overwintering survival of pink bollworm.

Enter genetically modified Bt cotton in 1996. Bt cotton is engineered to produce one or more proteins from the bacterium Bacillus thuringiensis (Bt for short) that kills pink bollworm and other related caterpillar pests and are harmless to people and most other insects, unlike broad spectrum pesticides. Growing mostly Bt cotton knocked the pink bollworm population down by 90 percent in 10 years. At the same time, farmers continued employing other techniques.

By 2006, for the first time, eradication became a practical reality. With an eye to finishing off pink bollworm, detailed cooperative plans were developed by a coalition that included cotton farmers, grower organizations, ARS researchers, USDA’s Animal and Plant Health Inspection Service (APHIS), the biotech industry, the Arizona Department of Agriculture, the Arizona Cotton Research and Protection Council, and UofA extension and research scientists. Many of these groups’ counterparts in Northern Mexico were also were also recruited.

APHIS also scaled up production of sterile pink bollworm moths so that billions of them were unleashed by airplanes to overwhelm any field populations of the pest.

Removal of pink bollworm saved U.S. cotton farmers $192 million from 2014 to 2019 alone, according to the study. Pink bollworm suppression has also facilitated integrated pest management for all other cotton pests. Overall, this reduced insecticide use by 82 percent, avoiding application of 25 million pounds of insecticides in Arizona alone during the past two decades. It improved the overall environment and brought back beneficial insects as the ecology returned to a more natural balance.

AFR/OFU thrilled with passage of RAMP UP Act