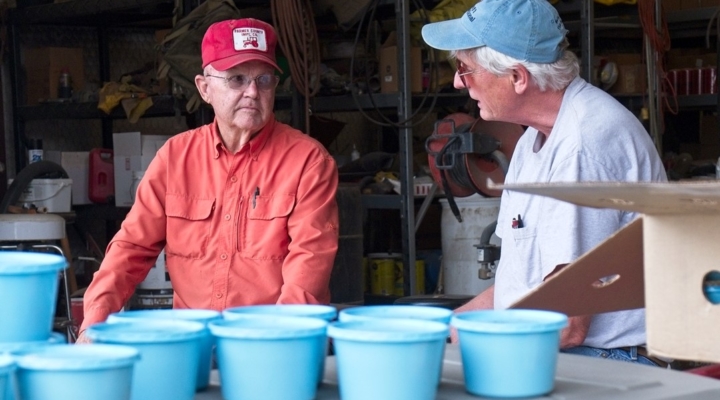 ITHACA, N.Y. — In May, Cornell University entomologist Elson Shields, Ph.D., and Research Support Specialist Antonio Testa transport 23 billion native New York nematodes to farms in Texas and New Mexico for field application against Western corn rootworm. Shields and Testa, who pioneered the use of biocontrol nematodes as a crop pest management protocol, built a generator-powered system to maintain a temperature of 70 degrees Fahrenheit to protect the nematodes under the cap of a pickup truck.

With long-term funding from the farmer-driven Northern New York Agricultural Development Program, Shields and Testa created the science and the nematode-rearing procotol behind the use of native nematodes for controlling alfalfa snout beetle, the most highly destructive crop pest of the alfalfa crops so critical to the regional dairy industry.

Over time, the biocontrol application has been field-tested and increasingly proven its value as a biocontrol for managing pests in corn, berries, potatoes, and potentially other crops.

“The science built and proven in Northern New York over the course of more than 30 years for using the native nematodes as a crop pest biocontrol has steadily expanded to help farmers across New York State and other states and to address pest issues in multiple crops,” said Shields. “The expansion of this cost-effective, easy-to-apply management practice would not be possible were it not for the long-term commitment the farmers of Northern New York needed to develop the science to support a solution for snout beetle.”

With local funding, Texas Agri-Life Extension entomologists and private ag consultants are jointly conducting large farm trials testing the NY nematodes as a biocontrol to manage corn rootworm in Dalhart, TX, and growers have completely funded trials in Riodoso, NM. Applications have been made to more than 900 acres using both ground application and through a center pivot irrigation system.

Having learned of the concept using persistent biocontrol nematodes while working in West Texas, a newly-hired Extension entmologist with Auburn University in Alabama recently contacted Shields about trying the biocontrol nematodes to manage billbugs, a type of beetle that impacts lawn, sod and grass crops.

In 2019 with a new grant from the Northern New York Agricultural Development Program, Cornell University Cooperative Extension Field Crops Specialist Mike Hunter is evaluating the application of the biocontrol nematodes in manure as a way to incorporate the pest management practice into an existing farm task. The research prompted the creation of a new business enterprise now raising the biocontrol nematodes locally for application by farmers and custom spraying services in the Northern New York region.