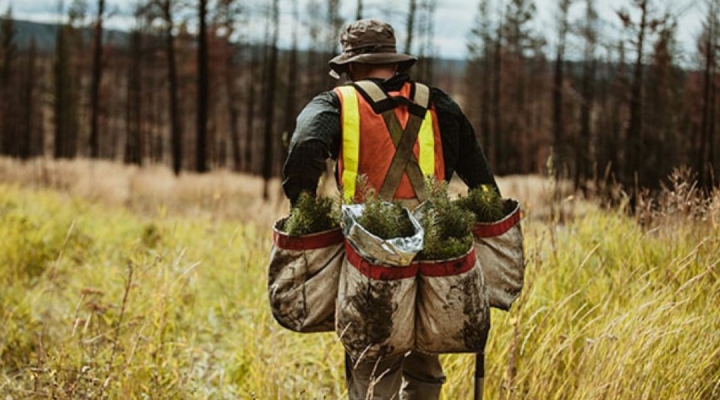 The Forest Service has invested more than $100 million in reforestation this year – more than three times the investment in previous years – thanks to the Repairing Existing Public Land by Adding Necessary Trees (REPLANT) Act made possible by the Bipartisan Infrastructure Law.

WASHINGTON — Agriculture Secretary Tom Vilsack announced a strategy for how the Biden-Harris Administration, through the U.S. Department of Agriculture, will address a reforestation backlog of four million acres on national forests and plant more than one billion trees over the next decade.

With new resources made available through President Biden’s Bipartisan Infrastructure Law, combined with support from state, local, and Tribal governments as well as other partners, the Forest Service aims to eliminate the backlog over the next 10 years and develop the infrastructure, such as nurseries, to keep up with increasing needs.

The Forest Service has invested more than $100 million in reforestation this year – more than three times the investment in previous years – thanks to the Repairing Existing Public Land by Adding Necessary Trees (REPLANT) Act made possible by the Bipartisan Infrastructure Law. These historic investments will help mitigate the impacts of climate change, rebuild in the aftermath of devastating wildfires and strengthen America’s forestlands.

“Forests are a powerful tool in the fight against climate change,” said Secretary Vilsack. “Nurturing their natural regeneration and planting in areas with the most need is critical to mitigating the worst effects of climate change while also making those forests more resilient to the threats they face from catastrophic wildfire, historic drought, disease outbreaks and pest infestation.”

Before the Bipartisan Infrastructure Law and REPLANT, the Forest Service was only able to address about 6% of its post-wildfire reforestation needs. The REPLANT Act directs the Forest Service to plant more than a billion trees over the next decade, removes a cap of $30 million and is now expected to provide the agency significantly more resources every year to do so.

Secretary Vilsack and Chief Moore said that the strategy announced today is an important first step in realizing the goals laid out in President Biden’s direction to scale up climate-smart reforestation and also supports the Forest Service’s 10-year strategy to cut wildfire risk, protect communities and improve forest health.

In addition to the reforestation strategy, Secretary Vilsack announced 13 new USDA agency climate adaptation plans, which outline how each USDA agency will incorporate climate change into their operations and decisions to support communities, agriculture and forests nationwide.

“Our climate adaptation plans represent a blueprint for how we account for the risks our changing climate has on those groups most vulnerable to its effects – America’s farmers, ranchers, forest landowners and rural communities,” said Secretary Vilsack.

With nearly half the country experiencing drought, record-breaking heat, and increasing development where fire-prone forests meet at-risk communities, Secretary Vilsack said that prioritizing climate in how the USDA makes decisions will be critical in protecting people, resources and livelihoods.

Tomatoes, but not farm workers, gardeners, safe from soil lead