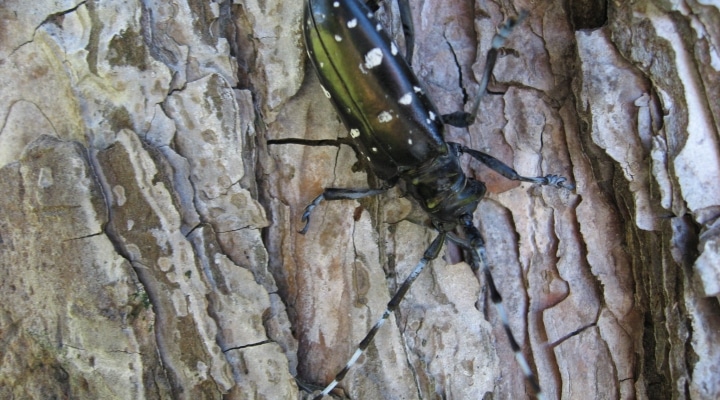 The U.S. Department of Agriculture says it's focusing on eradicating the destructive Asian longhorned beetle in parts of Massachusetts, New York and Ohio in 2020. (photo by mike.benedetti, creative commons/flickr.com)

The USDA’s Animal and Plant Health Inspection Service announced Thursday it will monitor for the beetle’s presence in several cities and remove infested trees at no cost to property owners.

The beetle is not native to the United States and kills many species of hardwood trees. The USDA says the pest could have a devastating impact on forests, parks and certain industries if it’s allowed to take hold.

The effort will focus on Massachusetts’ Worcester County, Ohio’s Clermont County and on Long Island in New York.

Officials say the beetle has successfully been eradicated in Illinois, New Jersey and several cities. The USDA says it successfully wiped out the pest last year in Brooklyn and Queens in New York.

“This year, we’ve mapped out a sound strategy that will further our efforts to eliminate this pest from the remaining areas of this country where it still has a foothold,” Osama El-Lissy, the service’s plant protection and quarantine deputy administrator, said in a statement.

The service is asking residents to allow officials onto their property to inspect, and it urges residents to contact officials before moving any infested wood.

The road to success for dystocia calves

Nominations sought for 2020 Vermont Dairy Farm of the Year