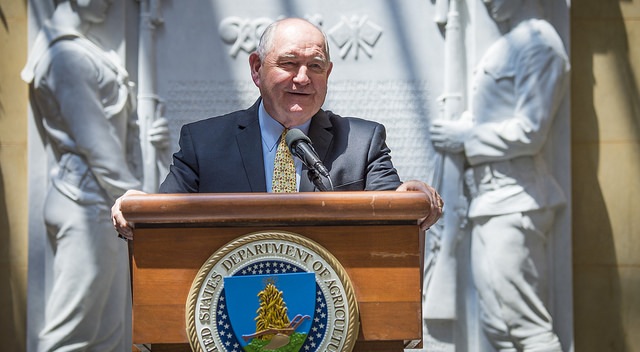 “These reports are greatly anticipated each time they are released, and they can have significant market impacts,” said U.S. Secretary of Agriculture Sonny Perdue. (U.S. Department of Agriculture, Flickr/Creative Commons)

WASHINGTON — The U.S. Department of Agriculture (USDA) today announced new procedures for the release of market-affecting crop and livestock reports from the National Agricultural Statistics Service (NASS) and World Agricultural Outlook Board (WAOB) to ensure that all members of the public have access to the information at the same time. Under current “Lockup” procedures, information is released to the public at 12:00 p.m. (Eastern), though the news media are allowed access approximately 90 minutes early, with their reports embargoed until the noon release time. Prompted by inquiries from the public, USDA examined the procedures and determined that technological advancements have afforded recipients of customized media reports a market advantage not enjoyed by members of the general public. The USDA also sought analytical assistance from the Commodity Futures Trading Commission to help inform a policy update to the lockup procedures. As a result, beginning August 1, 2018, USDA will provide media the same access to the NASS and WAOB reports as the public, with the information becoming available to all at 12:00 p.m. on days the reports are released.

“These reports are greatly anticipated each time they are released, and they can have significant market impacts,” said U.S. Secretary of Agriculture Sonny Perdue. “Everyone who has interest in the USDA reports should have the same access as anyone else. Modern technology and current trading tactics have made microseconds a factor. This change addresses the ‘head start’ of a few microseconds that can amount to a market advantage. The new procedures will level the playing field and make the issuance of the reports fair to everyone involved.”

USDA produces a number of reports with significant market impacts, such as commodity futures sold on the Chicago Board of Trade. Those reports are prepared by NASS and WAOB staff under special “lockup” conditions at USDA: no electronic transmission devices are permitted into lockup (such as cellular telephones) and once people enter the lockup they cannot leave until the reports are sent out to the public at 12:00 p.m.

The public is allowed to enter lockup at 10:30 a.m. to hear about the lockup facility and to sit in on the data briefing that occurs at approximately 11:45 a.m. Again, no transmission devices are allowed into lockup and the public is not allowed to leave until 12:00 p.m.

It takes USDA data roughly 2 seconds to be transmitted and posted for the public to read. Meanwhile, press organizations have access to high-speed fiber optic lines out of the USDA lockup and advertise paid services to clients that offer ‘ultra-low latency’ data transmission speed. They have approximately 90 minutes to distill the reports down to their clients’ needs.

There is evidence to suggest that there is significant trading activity worth millions of dollars that occurs in the one to two second period immediately following 12:00 p.m., which could not be based on the public reading of USDA data. The inference is that private agents are paying the news agencies for faster data transmission to get a jump on the market.

What is USDA doing to fix this?

USDA is requiring the media to participate in lockup in the same way as the public. Media will no longer receive the reports in advance nor can they utilize high-speed transmission cables from within USDA’s lockup facility.

Climate benefits of farmland and ranchland

Is the "organic" seal worth it, given disputes?