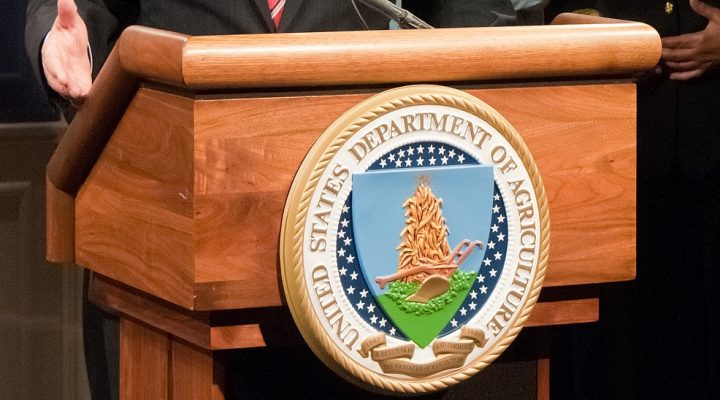 A spokeswoman for USDA's Animal and Plant Health Inspection Service said Tuesday that the agency is trying to balance the need for transparency with rules protecting individual privacy rights. (U.S. Department of Agriculture, Flickr/Creative Commons)

WASHINGTON (AP) — The Agriculture Department says “adjustments may be made” in its decision to remove animal welfare inspection reports, enforcement records and other information about the treatment of animals from its website.

The information, including lists of animal welfare violations at commercial dog and horse breeding facilities and animal testing labs, was removed from the department’s website Friday morning. A spokeswoman for USDA’s Animal and Plant Health Inspection Service said Tuesday that the agency is trying to balance the need for tranparency with rules protecting individual privacy rights.

“These decisions are not final,” said USDA’s Tanya Espinosa in a statement. “Adjustments may be made regarding information appropriate for release and posting.”

Espinosa said a review of the website has been ongoing and the agency decided to “make adjustments to the posting of regulatory records” in 2016, before President Donald Trump took office. But former President Barack Obama’s agriculture secretary, Tom Vilsack, appeared not to act on that decision.

On Sunday, a former USDA spokesman for Vilsack said on Twitter that the decision to remove the reports was “not required.”

At issue is a long-running dispute between animal rights groups and some animal industry groups, including the horse industry, over documents related to the Animal Welfare Act and the Horse Protection Act. Some in the industry have sued the department to have the records removed from the website, citing personal information.

“APHIS is currently involved in litigation concerning, among other issues, information posted on the agency’s website,” Espinosa said. “While the agency is vigorously defending against this litigation, in an abundance of caution, the agency is taking additional measures to protect individual privacy.”

USDA says the documents will still be available through Freedom of Information Act requests, which can be costly for the general public and sometimes take months or years to obtain.

Animal rights groups immediately criticized the decision, and The Humane Society of the United States says it has taken steps to reopen a settled lawsuit against USDA. The two parties settled a lawsuit in 2009 that required some of the information to be posted.

“You’d think that USDA would want the work of its field personnel to be examined and used by the public,” wrote Wayne Pacelle, the animal rights group’s president and CEO, in a blog post. “But this action suggests a deliberate effort to bury its work and impede efforts to ensure the well-being of animals in numerous sectors. The HSUS will continue to pursue this matter until public access is fully restored.”

One of the top advisers to USDA from the Trump administration has been Brian Klippenstein, who comes from an animal agriculture group called Protect the Harvest. One of that group’s missions is to “inform America’s consumers, businesses and decision-makers about the threats posed by animal rights groups and anti-farming extremists.”

Trump has nominated former Georgia Gov. Sonny Perdue to be agriculture secretary, but he has not yet been confirmed.

USDA seeks feedback from producers about crops and stocks
May 20, 2020