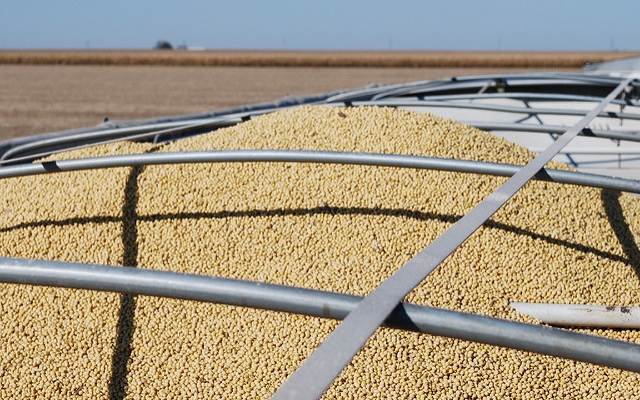 “Soybean prices moved higher after the release of the reports on a lower national average yield,” Hubbs says. “An average U.S. soybean yield of 49.1 bushels per acre is 0.4 bushels lower than the previous forecast and trade expectations." (United Soybean Board via Flickr)

The following discussion from University of Illinois agricultural economist Todd Hubbs recaps the information contained in the USDA reports and the price implications associated with them for corn and soybeans.

According to Hubbs, the World Agricultural Supply and Demand Estimates report witnessed changes in the forecasts for major soybean consumption categories projected in the December report.

Corn prices showed a muted response to the overall bearish news contained in the reports, Hubbs says. The estimate for corn production in the U.S. in 2017 came in at 14.60 billion bushels. Production is up 26 million bushels from the previous forecast on higher national average yields. Average corn yield of 176.6 bushels per acre is 1.2 bushels higher than the previous forecast. The harvested acreage estimate of 82.7 million acres is down from the November forecast of 83.1 million acres. Dec. 1 corn stocks came in at 12.52 billion bushels.

“World supply projections for corn in the 2017-18 marketing year moved slightly lower due to a reduction in Southeast Asia and former Soviet Union production numbers that offset the increase in U.S. production levels,” Hubbs says. “Brazil’s corn production forecast stayed at 3.74 billion bushels. For the marketing year, Argentinian production forecasts stayed at 1.65 billion bushels despite numerous reports indicating the possibility of trouble with planting and soil moisture issues in many corn-growing areas of Argentina. The forecast for Argentina and Brazil corn exports added 100 million bushels during the 2017-18 marketing year above the 2016-17 estimates of 2.38 billion bushels. Given the current level forecast for South American exports, the evolution of crop conditions in the region may have implications for corn price dynamics in 2018.”

Hubbs adds that the reports provide support for soybean prices in the short term while corn prices should experience some weakness but stay in the range witnessed over the last few months, despite the larger crop and growing ending stocks.

“Corn and soybeans prices, in the near term, will reflect the pace of consumption and crop prospects in South America,” Hubbs says. “Corn prices will likely average in the middle to lower part of the range of the USDA’s projection while soybean prices show the potential for falling into the lower half of the projected range as we move through the marketing year.”