Home / National / USDA plan to move offices sparks concerns
A new user experience is coming! We'll be asking you to login to your Morning Ag Clips account March 1st to access these new features.
We can't wait to share them with you! Read more here. 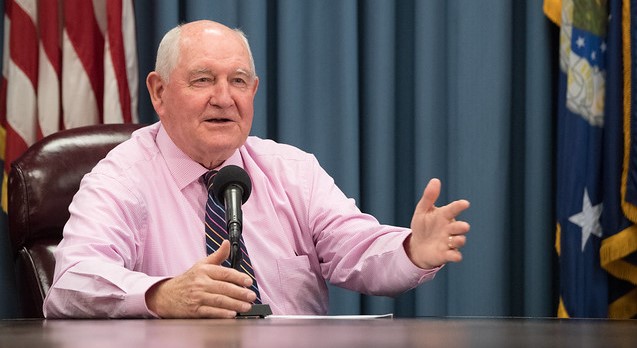 Agriculture Secretary Sonny Perdue said that moving most employees out of Washington will bring the Economic Research Service and National Institute of Food and Agriculture closer to farmers and agribusinesses they serve. But critics said the research agencies have lost veteran employees and been unable to fill vacancies since the USDA announced last year it was considering moving their headquarters. (U.S. Department of Agriculture, Public Domain)

TOPEKA, Kan. (AP) — The U.S. Department of Agriculture announced Thursday that it will relocate two research agencies’ headquarters to the Kansas City area, delighting Kansas and Missouri officials but intensifying critics’ fears that research will suffer and be less accessible to federal policymakers.

Agriculture Secretary Sonny Perdue said that moving most employees out of Washington will bring the Economic Research Service and National Institute of Food and Agriculture closer to farmers and agribusinesses they serve. He also said the USDA would save about $20 million a year on rent and other employee costs, freeing up extra dollars for research.

Members of the Kansas and Missouri congressional delegations and the two states’ governors praised the USDA’s move, saying the research agencies are a good fit for their region. The USDA said nearly 550 of the roughly 640 jobs will move, and U.S. Rep. Emanuel Cleaver, a Missouri Democrat, said they will pay between $80,000 and $100,000 a year.

But critics said the research agencies have lost veteran employees and been unable to fill vacancies since the USDA announced last year it was considering moving their headquarters. Opponents also argued that moving them will make it harder for federal policymakers to get objective research that might raise questions about President Donald Trump’s policies.

“This is a blatant attack on science and will especially hurt farmers, ranchers and eaters at a particularly vulnerable time,” said Mike Lavender, a senior manager for the scientist group’s Food and Environment Program.

The Economic Research Service examines a wide range of issues, including the rural economy, international trade, food safety and programs that provide food assistance to poor Americans. The National Institute of Food and Agriculture provides grants for agricultural research.

Perdue said the two agencies are the only parts of the USDA with no presence outside the greater Washington area, and 90 percent of the department’s employees live outside that region. He also said the agencies will be able to draw future staff from a large “agriculture talent pool” in the Midwest.

The agriculture secretary told reporters on a conference call that the USDA doesn’t yet know how many employees will move to Kansas City but the plan is not “an operation to leave anybody behind.” He said the goal is to have workers relocated by the end of September.

“Once people who choose to move can relocate to Kansas City, I think there would be more furor trying to move them back after three or four years,” Perdue said. “We didn’t do this with disruption in mind. We did this for the benefit of the two agencies.”

Kansas State University and the University of Missouri’s main campus are roughly a two hours’ drive from the Kansas City metropolitan area. Also, the Kansas State campus is home to a billion-dollar federal biosecurity research lab that’s under construction.

Perdue said state and local officials offered $26 million in incentives, although he declined to provide details. The joint Kansas-Missouri bid beat out 135 others.

“It is always positive when our government can operate outside of Washington and closer to the people it serves,” said Kansas Sen. Jerry Moran, a Republican.

The move drew strong criticism from two Democratic chairwomen of U.S. House Agriculture subcommittees, Marcia Fudge of Ohio and Stacey Plaskett of the Virgin Islands. They accused the USDA of rushing its decision and ignoring farmers, ranchers and researchers opposed to it.

Reporters present when Perdue spoke to employees from the two agencies Thursday tweeted or posted photos of them turning their backs on him.

The American Federation of Government Employees, which represents workers at the two research agencies, also denounced the plan. Employees at both recently unionized.

“We will continue to work with Congress and other parties to fight this wrongheaded proposal, which is little more than a backdoor way to slash the workforce and silence the parts of the agencies’ research that the administration views as inconvenient,” Cox said in a statement.