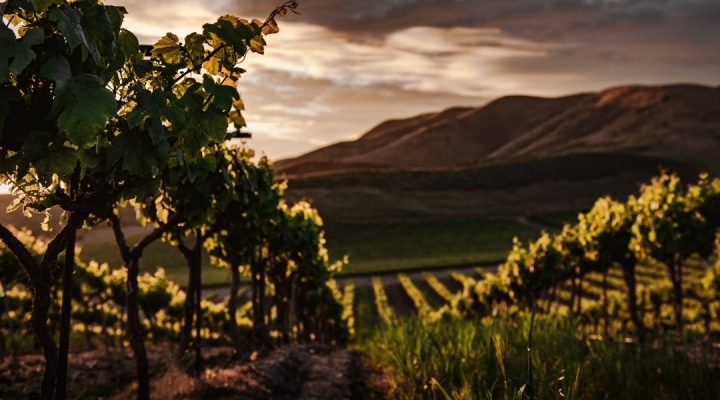 In southwest Oregon, the cooler temperatures were very helpful for growers who irrigated fields. The cooler weather also helped the wine grape crop by slowing down development. This improved the quality of the grapes by preserving acidity in the ripening berries. (Tim Mossholder/Unsplash)

OLYMPIA, Wash. — Crop progress and conditions for the Northwest Region for the week ending August 22, 2021.

Idaho Received Some Moisture and Cooled Off Parts of the State
There were 6.6 days suitable for fieldwork, down from 7.0 days reported the previous week. Several parts of Idaho
reported rainfall. Temperatures were four to five degrees below normal in much of the State. Northern Idaho reported cooler temperatures and some good rainfall, about one third to one half of an inch depending on location. The air cleared up from wildfire smoke as well. Some pastures were too dry to show much improvement. Other fields greened up with the better conditions. Harvest was completed for small grains. In south central Idaho, nice weather with moderate temperatures were reported. Cereal harvest wrapped up. Some fields were prepared and planted to alfalfa. Dry beans harvest started to pick up. Rain was reported in parts of eastern Idaho. This delayed some harvest activities and reduced days suitable for field work.

Hot Temperatures Finally Cooled Off in Oregon
There were 6.7 days suitable for field work, up from 6.6 the previous week. In northwestern Oregon, better weather was reported for most crops. Heat stress decreased. This change in weather had additional positive impact of reduced irrigation demand. Irrigation remained key for most crops still in an active growing cycle such as nursery, vegetable, and late small fruit crops. Mint oil harvest was almost complete. In north central Oregon, producers wrapped up the grain harvest and started early field preparations for the 2022 crop. Pastures continued to struggle. In northeastern Oregon, 2022 crop planting was delayed due to dry conditions. In southwest Oregon, the cooler temperatures were very helpful for growers who irrigated fields. The cooler weather also helped the wine grape crop by slowing down development. This improved the quality of the grapes by preserving acidity in the ripening berries. Fall wheat and cover crop seeding waited for adequate rainfall. Irrigated fall vegetable crops did well. Irrigation water supply was lower than observed in the past twenty years. Tree fruit crops developed rapidly as the local Bartlett pear crop started harvest. D ‘Anjou and Comice pears were still about a month from harvest. The Gala apple crop was about two weeks away from starting harvest. In southeast Idaho, Malheur County reported lower temperatures and scattered thunderstorms. Bean harvest started. Onion harvest continued, as did alfalfa and mint. Large numbers of spotted cutworm moths were observed dispersing from harvested alfalfa and mint fields. In Lake County, little to no precipitation was received during the week. Second cutting of alfalfa was completed.

Cooler Temperatures Throughout Washington
There were 6.7 days suitable for field work, up from the previous week. Statewide temperatures for the week ending
August 22, were below normal. In western Washington, it was cooler with a few very light showers. The cooler weather slowed harvest. Ground moisture continued to drop. Irrigated grass yields produced well but non-irrigated grass was shutting down. For crops overall, the yields and quality were above average. In San Juan County, tree fruit crops were sizing up with early apple varieties being harvested. Irrigation water supplies in most ponds were down and lower than average due to the heat and having to irrigate more to keep up with plant needs. It was week four of severe D-2 drought. In Snohomish County, there was plant stress where water was not available. In central Washington, precipitation coupled with cooler temperatures helped topsoil moisture conditions. Schneider Springs fire was growing. Poor air quality lingered in the upper Yakima Valley. Bartlett pear harvest continued while early apple varieties also began harvest. In east central Washington, much cooler weather arrived which allowed irrigators to catch up on watering. Some crops were recovering from the earlier heat. Winter wheat seeding will start this week as growers hope to find adequate seed zone moisture in select fields across the area. One producer already seeded winter wheat. In southeast Washington, there were cooler temperatures and little rain.