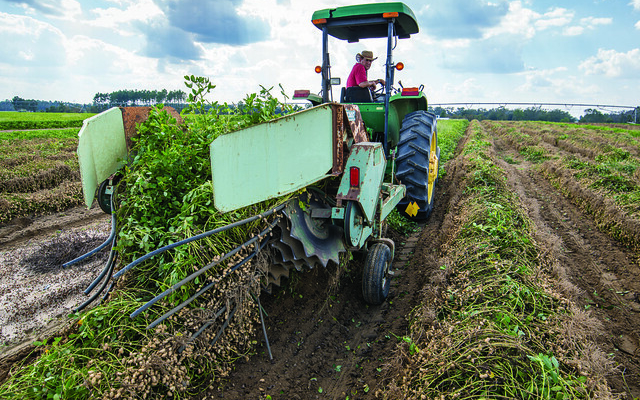 Secretary of Agriculture Sonny Perdue recently appointed three members and three alternates to serve on the National Peanut Board. The appointees will serve three-year terms beginning Jan. 1, 2020 and ending Dec. 31, 2022; except for the alternate from South Carolina whose term will begin immediately and end Dec. 31, 2021. The members and alternates will be sworn in by USDA at the quarterly National Peanut Board meeting Dec. 11, 2019. (photo by UGA CAES/Extension, creative commons/flickr.com)

WASHINGTON — Secretary of Agriculture Sonny Perdue recently appointed three members and three alternates to serve on the National Peanut Board. The appointees will serve three-year terms beginning Jan. 1, 2020 and ending Dec. 31, 2022; except for the alternate from South Carolina whose term will begin immediately and end Dec. 31, 2021. The members and alternates will be sworn in by USDA at the quarterly National Peanut Board meeting Dec. 11, 2019.

Gregory Baltz of Pocahontas is the newly-appointed member from Arkansas.
Baltz operates Running Lake Farms and has been growing peanuts for nine years. He farms runner peanuts, rice, corn and soybeans. “It’s an exciting time to be growing peanuts in Arkansas,” said Baltz. “With challenging opportunities for the industry ahead, I’m honored to represent our growers in these endeavors.

“I look forward to serving on the National Peanut Board and collaborating with the members and staff, who are some of the most talented and knowledgeable people in agriculture. I also look forward to engaging university research specialists in developing solutions to today’s most challenging peanut issues. And I am keenly interested in advancing the science behind reducing peanut allergies,”

Baltz and his wife Mary Nell have been married for 41 years and have three married children pursuing their own careers: Lewis, a geologist; Clinton, a mechanical engineer; and Angela, a biomedical engineer.

Baltz graduated from University of Arkansas with a degree in agricultural engineering. He serves on the University of Arkansas College of Engineering Dean’s Advisory Council, as well as the Division of Agriculture Rice Processing Program. He is a current member and former county president of Farm Bureau, and past president of the University of Arkansas Academy of Biological and Agricultural Engineers. Baltz is a former executive officer and member of the Board of Directors of the Knights of Columbus. He is a member of Black River Technical College Ag Advisory Committee. In his spare time, Baltz and Mary Nell enjoy traveling.

Allen Donner of Manila is the newly-appointed Arkansas alternate.
Donner owns/operates Blackwater Farms Partnership and grows high oleic runner peanuts, cotton, soybeans and corn. Donner and his son, Heath, mark the fourth and fifth generations, respectively, of farmers in their family. Donner is a graduate of Manila High School and studied agronomy at University of Arkansas and Arkansas State University.

Donner is active in the local agriculture community. He is the current president of three organizations: Arkansas Peanut Growers Association; Cotton Growers Gin, on which he has served for 27 years; and NE Arkansas Area Conservation District. Donner is past president of Mississippi County Conservation District Board, past board member of Mississippi County Farm Bureau, and currently serves on an advisory committee for Staplcotn Coop. Donner also volunteers his time for community groups including serving on Manila Public Schools Board of Education for 15 years with five years as president. He also serves as deacon at Manila First Baptist Church and as past chairman multiple years. He’s on the board of trustees for the Arkansas State Baptist Convention.

Donner and his wife Debbie, a school teacher, have two grown children in addition to Heath who is married to Melissa: Adam and daughter-in-law Ashley; and Katie (Evans) and son-in-law Kyle. They also have six grandchildren, Madison, Caitlin, Zeke, Easton, Jack and Kane, and are expecting their seventh, Josie, in November. In his free time, Donner enjoys water sports including skiing and wakeboarding at the nearby lake.

“Arkansas is one of the newest states to grow peanuts and our first peanut buying point is expected to open early next year,” said Donner. About serving on the National Peanut Board, Donner said, “I want to learn more about the peanut industry as a whole, to understand more about how the Board benefits farmers and to be able to bring that back to the growers at home.”

Bruce Lee of Floyd is the newly-appointed member for New Mexico.
Bruce Lee, who is a sixth-generation farmer, is the owner/operator of Home Grown Organic Farms. Even though he has been a full-time farmer growing a variety of crops for 36 years, he started growing organic peanuts, corn, wheat, sorghum and hay grazer three years ago. He is in the livestock business also.

Lee is a member of the New Mexico Peanut Growers Association and past member of the Lions Club, where he served as president and program chairman of the Benefit Amateur Country/Western Show. He has been a volunteer firefighter for more than 30 years.

Lee has been a longtime member of the Maple Cotton Coop/Gin and served on the nominating committee of the Roosevelt Electrical Association. In the early 1990s, Lee received an award for soil conservation from USDA’s Soil Conservation Department for planting trees for windbreaks. Lee and his wife Tina, a teacher at South Plains College, have three children: Rebecca who is a freshman at South Plains College, and twins Mckenzie and Lexi.

“I’m looking forward to being on the National Peanut Board to help the peanut crop stay vital in New Mexico,” said Lee. “Farming in New Mexico has had its set of challenges over the past few years, and I hope to learn from other farmers about how to keep peanuts strong in our area and grow them efficiently and economically.”

Les Crall of Weatherford is the reappointed member for Oklahoma.
Les Crall has been in peanut farming for 24 years and currently serves on the executive committee of the National Peanut Board. Also, he serves as chairman of the Oklahoma Peanut Commission and a former member of the Peanut Standards Board.

Crall earned an undergraduate degree in Accounting and a Master of Business Administration from Southwestern Oklahoma State University (SWOSU) and a Juris Doctorate from the University of Oklahoma.  As a member of the SWOSU faculty for 29 years, Crall served as associate dean of the Everett Dobson School of Business & Technology and in 2018, he received the SWOSU Alumni Association Emeritus Award.

Les and Laurie are members of First Baptist Church of Weatherford.  Les enjoys spending time with family and friends. He also provides the radio broadcast commentary for the Southwestern Oklahoma State University Bulldogs football team and has been the public address announcer during the basketball season for nearly three decades.

Gayle White of Frederick is the reappointed Oklahoma alternate.
Gayle White is the co-owner/operator of White Farm and Ranch with her husband, Joe D., and has been engaged in peanut production for 32 years. The White family grow Virginia peanuts, cotton, corn and wheat, and have an Angus cow/calf operation.

White is a past chairman of the National Peanut Board and was a Board member of the American Peanut Council for three years.

“Through years of serving my fellow peanut farmers on the National Peanut Board, I enjoyed participating in many effective peanut promotional campaigns,” said White. “I was involved with the allergy research for several years. I’m still very interested in and proud of the incredible achievements NPB has helped make possible.”

The Whites have three married children and four grandchildren: Jessica (White) and Justin Lewis have a daughter, Parker, 5, and a son, Asa, three months; Whitney (White) and Brandon Bell have two girls, Barrett, 5, and Briar, 3.  Austin White recently married Allie, who is in her first year of residency in family medicine, while Austin has a farming and ranching operation.

Steven Neal Baxley Jr. of Alcolu is the newly appointed South Carolina alternate.
Neal Baxley Jr. is a seventh-generation farmer and, along with his father Steve and brother Gene Robert, owns and operates Baxley Farms LLC. They grow peanuts, corn, cotton, soybeans, and tobacco and have a cattle and hog operation.

He serves as a deacon at Mullins Presbyterian Church. His spare time activities include spending time with his wife and children, participating in church activities and going quail hunting.