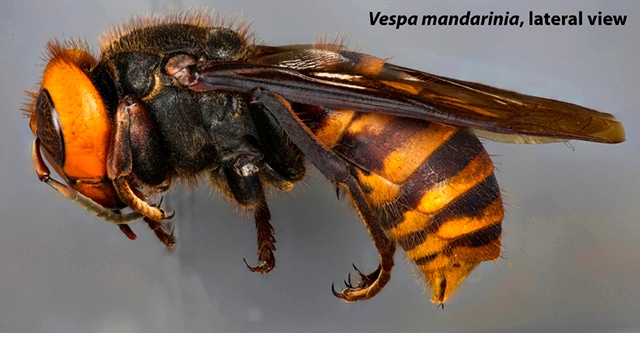 A scented lure developed by ARS is being was used to live trap Asian giant hornets. (Courtesy Photo)

WAPATO, Wash. — A scent lure designed by Agricultural Research Service (ARS) scientists to attract Asian giant hornets played a key role in the discovery of the first nest of these invasive insects in the United States.

Washington State Department of Agriculture (WSDA) entomologists have verified several finds of Asian giant hornets in Whatcom County since December 2019. They have been actively searching for the Asian giant hornets’ nests ever since. But finding a hornet nest is a difficult hunt, even that of the world’s largest hornet, when the nest is most likely a hole in the ground or a tree.

To increase the odds of finding the nest, the WSDA team planned to live-trap some of the Asian giant hornets, fit them with radio transmitters provided by USDA’s Animal and Plant Health Inspection Service (APHIS), and track them back to the nest.

The first step was to attract the Asian giant hornets to the traps. Enter insect chemical ecologist Jacqueline Serrano with the ARS Temperate Tree Fruit and Vegetable Research Unit in Wapato, Washington. She is carrying on the work of late ARS entomologist Peter Landolt, a world leader in chemical ecology research, who developed traps and attractive lures used for wasp and hornet species like the Asian giant hornet.

“The ARS lure is a chemical mixture of acetic acid. It smells like sweet fermenting rotting fruit, which can be a food source for Asian giant hornets,” said Serrano.

In contrast, the ARS lure is stable, so the traps don’t need to be refreshed as often.

Between Oct. 21-22, the WSDA team caught two live hornets using the ARS lure. The team successfully fitted several Asian giant hornets with transmitters and tracked one of the hornets back to its nest in a tree cavity near the city of Blaine. On Oct. 24, personnel from WSDA and APHIS removed the nest. They continue to use the ARS lure in the search for more nests.