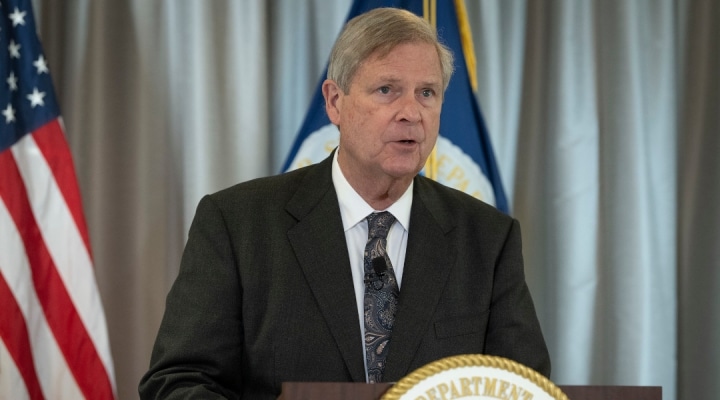 During a trade mission to the United Arab Emirates, U.S. Secretary of Agriculture Tom Vilsack told The Associated Press that a conflict in Ukraine would present an “opportunity, obviously, for us to step in and help our partners, help them through a difficult time and situation.” (U.S. Department of Agriculture, Public Domain)

DUBAI, United Arab Emirates (AP) — American wheat farmers will boost production and prevent supply chain problems in the event that a possible Russian invasion of Ukraine chokes off agricultural exports from the global grains powerhouse, the U.S. secretary of agriculture said on Saturday.

During a trade mission to the United Arab Emirates, U.S. Secretary of Agriculture Tom Vilsack told The Associated Press that a conflict in Ukraine would present an “opportunity, obviously, for us to step in and help our partners, help them through a difficult time and situation.”

“We’ll obviously continue to look for opportunities to expand those (export) markets,” Vilsack said from a sprawling fruit and vegetable market in Dubai, which he toured with a delegation of American business owners. “That’s the beauty of our system now.”

U.S. President Joe Biden said late Friday he was now “convinced” that Russian President Vladimir Putin had decided to invade Ukraine in the coming days. [Editor’s note: For President Biden’s full remarks ahead of this story, click here. This situation is unfolding rapidly; additional statements can be found here as they are released.]

A Russian invasion and blockade of Ukraine could jeopardize the country’s crucial wheat exports, which account for 12% of the world’s total, according to the U.S. Department of Agriculture. Ukraine is also estimated to supply 16% of the world’s corn exports this year. Its grain production has boomed over the last decade. Last year, the state harvested nearly 33 million metric tons of wheat, the USDA reported, a stark increase from the previous year.

The mounting tensions and militarization along the Russia-Ukraine border, along with pandemic-induced supply chain backlogs and spikes in fertilizer and farm equipment costs, helped push wheat prices to their highest level in nearly a decade last year.

A bushel of wheat was trading in Chicago at over $8 on Saturday — just below the multi-year high hit last year. The price of a bushel of corn climbed 0.5% on Saturday to exceed $6.50.

The disruption in commodity markets wrought by an invasion would most directly impact the biggest buyers of Ukrainian wheat in South Asia, Europe, Africa and the Middle East. Many countries, like Egypt, depend on wheat imports to provide subsidized bread to impoverished populations. That raises the risk of political and economic turmoil if those countries have to pay more to ship in wheat from the U.S. or farther afield.

“We certainly hope that doesn’t happen,” Vilsack said of a potential conflict driving up wheat prices. “I wouldn’t expect and anticipate that American consumers are necessarily going to see a direct impact, but European consumers, I think that’s a different story.”

On the U.S. decision Friday to lift a ban on inspections of Mexican avocados, Vilsack said there had been “a commitment by Mexican officials to do what needed to be done, which was to investigate the threats” against U.S. safety inspectors.

“Once we see those concerns are being addressed, then we see a safer environment in which our inspectors can return to work,” he said, paving the way for Mexican avocado exports to resume imminently.

Vilsack was in Dubai to advance an agriculture sustainability initiative and promote American agricultural exports to the UAE, a federation of seven desert sheikhdoms that imports up to 90% of its food.

After surveying the range of American produce in stock at the local market, including Red Delicious apples, Vilsack praised the U.S. relationship with the Emirates and stressed the importance of rebuilding trust with trade partners after years of turbulence under former President Donald Trump.

“I don’t see us reverting back to the approach of the previous administration,” Vilsack said, referring to Trump’s trade wars with China, Mexico and Canada that clobbered agricultural markets. “That caused a lot of disruption … it obviously cost us export opportunities.”

US paves way for resumption of Mexico avocado exports