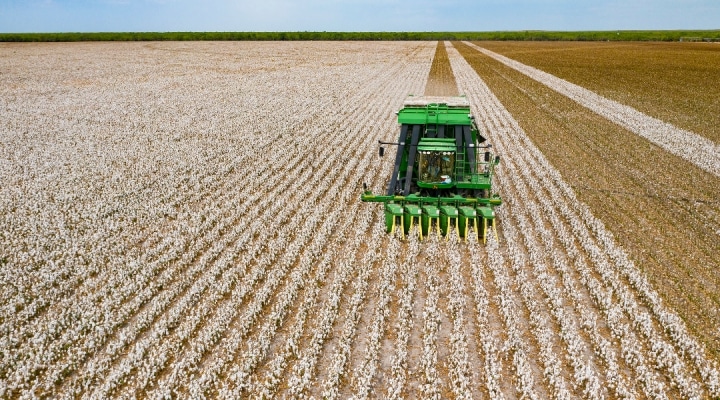 NASS forecasts all cotton area to be harvested at 9.92 million acres, 4% below last month’s forecast but 20% more acres than were harvested last season. (U.S. Department of Agriculture, Public Domain)

The average U.S. corn yield is forecast at 176.3 bushels per acre, up 1.7 bushels from last month’s forecast and up 4.3 bushels from last year. NASS forecasts record high yields in California, Illinois, Indiana, Kentucky, Michigan, New York, North Carolina, Ohio, Oklahoma, and Pennsylvania. Acres planted to corn, at 93.3 million, are up 3% from 2020. Area to be harvested for grain is forecast at 85.1 million acres, up 1% from last month and 3% more than was harvested last year. As of Aug. 29, 60% of this year’s corn crop was reported in good or excellent condition, 2 percentage points below the same time last year.

Area for soybean harvest is forecast at 86.4 million acres, down less than 1% from last month but 5% more than was harvested last year. Planted area for the nation, estimated at 87.2 million acres, is up 5% from last year. Soybean yields are expected to average 50.6 bushels per acre, up 0.6 bushel from last month’s forecast and up 0.4 bushel from 2020. If realized, the forecasted yields in Illinois, Indiana, Kentucky, Maryland, Mississippi, Missouri, New York, Ohio, Pennsylvania, and Virginia will be record high.

NASS surveyed more than 8,000 producers across the country and conducted objective yield surveys for corn, cotton, and soybeans in preparation for this report. The Crop Production report is published monthly and is available online at nass.usda.gov/Publications.