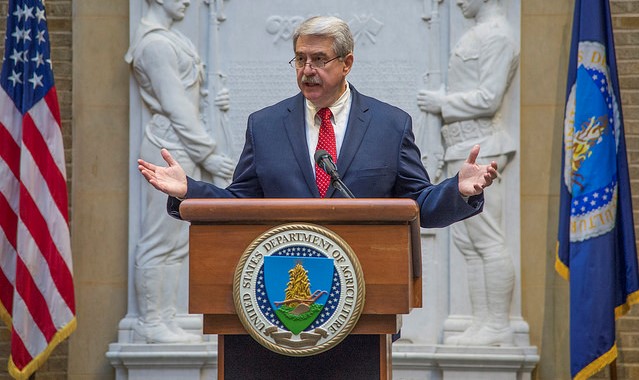 “It’s been a rollercoaster ride this year, but U.S. farm exports remain strong, thanks in no small part to the efforts of USDA’s Foreign Agricultural Service (FAS),” said Under Secretary for Trade and Foreign Agricultural Affairs Ted McKinney. “Under the leadership of Administrator Ken Isley, who joined the agency in March, FAS has been instrumental in the Administration’s efforts to promote free, fair and reciprocal trade.” (U.S. Department of Agriculture, Public Domain)

WASHINGTON — The U.S. Department of Agriculture (USDA) forged ahead to expand export opportunities and diversify markets for U.S. farm and food products in 2018, and those efforts paid off with global sales remaining robust despite numerous challenges in the international trade arena.

“It’s been a rollercoaster ride this year, but U.S. farm exports remain strong, thanks in no small part to the efforts of USDA’s Foreign Agricultural Service (FAS),” said Under Secretary for Trade and Foreign Agricultural Affairs Ted McKinney. “Under the leadership of Administrator Ken Isley, who joined the agency in March, FAS has been instrumental in the Administration’s efforts to promote free, fair and reciprocal trade.”

One of the year’s highlights was the successful negotiation of the U.S.-Mexico-Canada Agreement (USMCA), through which the United States strengthened its trade relationship with its North American neighbors.

“Dozens of experts from across FAS worked side-by-side with our partners in the Office of the U.S. Trade Representative to ensure the best deal for U.S. agriculture, ultimately ensuring preferential access for U.S. exports and solidifying commitments to fair and science-based trade rules,” McKinney noted.

In addition, USDA efforts to break down barriers and pursue export opportunities resulted in new or expanded market access for numerous U.S. farm products in 2018. These included dairy and poultry to Canada under the USMCA, as well as lamb and goat meat to Japan, beef and pork to Argentina, poultry to India and Namibia, lamb to El Salvador, beef and poultry to Morocco, eggs to South Africa and dairy to Turkey.

FAS staff around the globe also assisted U.S. exporters in releasing hundreds of shipments that were detained at foreign ports. USDA’s intervention ensured that more than $77 million of perishable U.S. products arrived safely at their final destinations. Among them were beef to Bulgaria, cherries to Taiwan, cranberries to China, lobsters to the United Arab Emirates and squid to Peru.

“In addition to these trade policy successes, we continue to focus our efforts on trade promotion, cultivating relationships with overseas customers and helping U.S. businesses get their products into new markets,” McKinney said.

As part of that effort, FAS sponsored six agricultural trade missions in 2018, enabling more than 200 U.S. companies and organizations to engage in 3,000 one-on-one meetings with foreign buyers, generating more than $140 million in projected 12-month sales.

“From Central America, to Southeast Asia, to Sub-Saharan Africa, it’s been gratifying to witness the world’s receptiveness to U.S. farm and food products. Consumers worldwide have a true affinity for the American brand and immediately recognize the safety and quality of our products,” said McKinney.

To further strengthen those trade promotion efforts, FAS rolled out the Agricultural Trade Promotion Program, which will provide $200 million to mitigate the effects of other countries’ trade barriers by helping U.S. agricultural exporters develop new markets. A total of 71 organizations applied for the new program, submitting requests totaling more than $600 million.

“In addition to pursuing these near-term opportunities, we continue to engage in what we call trade capacity building. That’s where we’re taking the long view – looking down the road to where the markets might be in the future, and then engaging leaders in those markets who can help develop sound policies and strong agricultural sectors,” McKinney noted.

Under the trade capacity-building umbrella, FAS international fellowship and exchange programs enabled 569 foreign researchers, policymakers, and agricultural specialists from 56 lower- and middle-income countries to work alongside U.S. mentors and trainers this year, acquiring knowledge and skills to help build their countries’ agricultural sectors and increase their ability to engage in global trade.

“We like to say that we’re leaving no stone unturned in our efforts to seek out new market opportunities and improve our export prospects in existing markets,” McKinney said. “In that regard, we’re looking forward to great things in 2019, including the pursuit of even stronger trade ties with partners such as Japan and the United Kingdom, the forging of new business relationships through seven agricultural trade missions, and further success in knocking down both tariffs and non-tariff barriers to trade.”