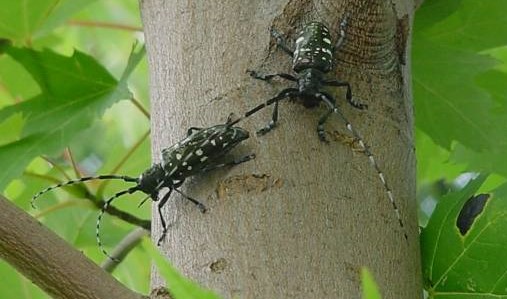 The Asian longhorned beetle feeds on a wide variety of popular hardwood trees, including maple, birch, elm, willow, ash and poplar. It has already led to the loss of more than 180,000 trees. (U.S. Department of Agriculture, Flickr/Creative Commons)

WASHINGTON — August is the height of summer, and it is also the best time to spot the Asian longhorned beetle (ALB) as it starts to emerge from trees. The U.S. Department of Agriculture (USDA) is asking the public to take five minutes to step outside and report any signs of this invasive pest. Checking trees for the beetle will help residents protect their own trees and better direct USDA’s efforts to eradicate this beetle from the United States.

“It’s important to look for signs of the beetle now, because it’s slow to spread during the early stages of an infestation,” said Josie Ryan, APHIS’ National Operations Manager for the ALB Eradication Program. “With the public’s help, we can target new areas where it has spread and provide a better chance of quickly containing it.”

The Asian longhorned beetle feeds on a wide variety of popular hardwood trees, including maple, birch, elm, willow, ash and poplar. It has already led to the loss of more than 180,000 trees. Active infestations are being fought in three areas of the country: Worcester County, MA, Long Island, NY (Nassau and Suffolk Counties), and Clermont County, Ohio.

“Homeowners need to know that infested trees do not recover and will eventually die, becoming safety hazards,” warned Ryan. “USDA removes infested trees as soon as possible because they can drop branches and even fall, especially during storms, and this keeps the pest from spreading to nearby healthy trees.”

The Asian longhorned beetle has distinctive markings that are easy to recognize:

Signs of infestation include:

After seeing signs of the beetle:

It is possible to eliminate this pest and USDA has been successfully doing so in several areas. Most recently, the agency declared Stonelick and Batavia Townships in Ohio to be free of the Asian longhorned beetle. We also eradicated the beetle from Illinois, New Jersey, Boston, MA, and parts of New York. The New York City boroughs of Brooklyn and Queens are in the final stages of eradication.

For more information about the Asian longhorned beetle, other ways to keep it from spreading—such as not moving firewood—and eradication program activities, visit www.AsianLonghornedBeetle.com. For local inquiries or to speak to your State Plant Health Director, call 1-866-702-9938.