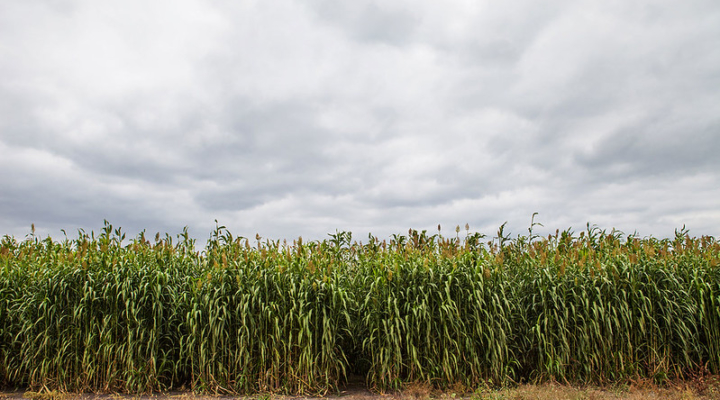 Scientists with USDA's Agricultural Research Service (ARS) and Cold Spring Harbor Laboratory (CSHL) are working on field trials and genetic studies that could one day double the yields of sorghum, which is one of the world's most important sources of food, animal feed and biofuel. (photo by PETROSS, TERRA-MEPP & WEST, creative commons/flickr.com)

WASHINGTON — Scientists with USDA’s Agricultural Research Service (ARS) and Cold Spring Harbor Laboratory (CSHL) are working on field trials and genetic studies that could one day double the yields of sorghum, which is one of the world’s most important sources of food, animal feed and biofuel.

The efforts follow recent discoveries by ARS scientist Zhanguo Xin, who is based in Lubbock, Texas, and Doreen Ware, who is also with ARS and is an adjunct professor at CSHL, showing how a basic genetic change in sorghum can double its yield of grain.

Their findings, spelled out in a series of papers, are based on years of research by scientists with ARS and CSHL that initially focused on a search for the genetic underpinnings of high yielding strains of sorghum that were first developed by Xin at the ARS Cropping Systems Research Laboratory in Lubbock. They also lay out a potential strategy for increasing the yields not only of sorghum but of other grain crops, such as corn, wheat and rice.

Sorghum is drought tolerant, is an important crop for farmers worldwide and increasing production is considered a key to addressing the threat of food shortages in the years ahead with changing climates, growing populations overseas and the loss of arable land in many parts of the world.

Sorghum grain is produced in clusters of flowers and the plant has two types of flowers, one type that produces grain and another that does not. The researchers have shown in a series of published reports that mutating a key gene in sorghum inhibits production of a hormone, known as jasmonic acid, and that plants with reduced levels generate more of the fertile type of flowers — and more grain.

Their results show that the gene, known as MSD1, is a major regulator of a cascading series of events along a genetic pathway that controls the production of jasmonic acid, particularly during flower development. They identified the role of MSD1 in a paper published last year in Nature Communications. Their subsequent papers in the International Journal of Molecular Sciences show that genes they have identified as MSD2 and MSD3 also play important roles further along in the genetic pathway and that mutating of any one of the three genes causes a similar increase in grain yield. Their most recent paper can be found here.

Xin and his colleagues are conducting field trials to see if the genes they have found could be used by breeders to improve yields in commercial varieties of sorghum.

Injuries and illnesses in poultry processing at new all-time low