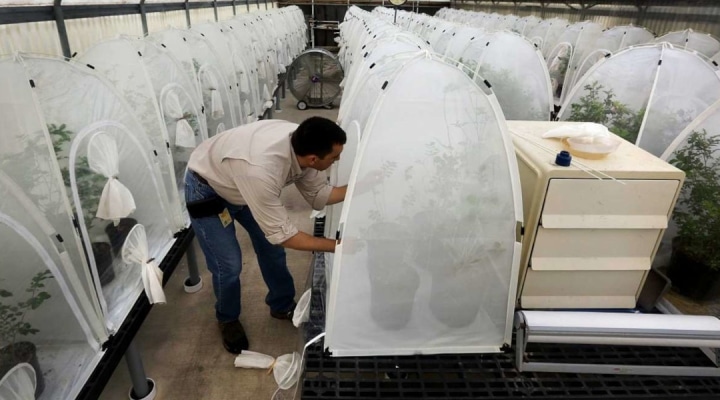 APHIS continued all of its mission-critical work in 2021, despite the ongoing pandemic, with employees working tirelessly on many diverse issues to help protect animals and plants in the United States. (U.S. Department of Agriculture, Public Domain)

WASHINGTON — The U.S. Department of Agriculture’s Animal and Plant Health Inspection Service (APHIS) is celebrating the agency’s many successful efforts to protect American agriculture and natural resources over the past year.

“APHIS has worked hard this last year to address vulnerabilities in our food system and create more, better, and fairer markets for producers and consumers alike, said Marketing and Regulatory Programs Under Secretary Jenny Lester Moffit. “We’re focused on ensuring that all Americans have consistent access to the safe, nutritious, affordable food we all need to be healthy.”

APHIS continued all of its mission-critical work in 2021, despite the ongoing pandemic, with employees working tirelessly on many diverse issues to help protect animals and plants in the United States. Some of the Agency’s major accomplishments this year include:

APHIS’ Strategic Framework for Advancing SARS-CoV-2 and Emerging Disease Surveillance
USDA is injecting $300 million from the American Rescue Plan Act over multiple years to conduct surveillance on SARS-CoV-2 in animals and to develop an early warning system that we believe will reduce the impact of or prevent future pandemics. APHIS, designated as the lead USDA agency for the effort, developed a strategic framework to strengthen our One Health capacity and improve the country’s ability to prevent, detect, report, and respond to SARS CoV-2–the virus that causes COVID-19—including potential emerging variants. Our immediate focus is to identify which animal species are capable of being infected and determine what role they play in further transmission of the virus to other animals or to people. We are doing this by expanding surveillance for SARS-CoV-2 to a wide range of animal species, increasing our ability to test those animals, and conducting multisectoral, One Health investigations of new animal detections and exposures. This approach provides essential information needed by USDA and our One Health partners to develop and evaluate effective interventions and prioritize research efforts to safeguard animal health, prevent transmission at the human-animal interface, and minimize potential impacts to the food supply. This framework creates the foundation for an early warning system that offers public health partners the opportunity to act sooner and potentially prevent or limit the next zoonotic disease outbreak or the next global pandemic. APHIS will continue implementing activities in support of the framework in FY 2022 and beyond.

Protecting the United States from African swine fever
For several years, APHIS has closely monitored African swine fever (ASF), a highly contagious and deadly viral disease of domestic and wild pigs, as it spread across Asia and Europe. Currently, the only way to stop it is to depopulate all affected or exposed swine herds. Early detection is the key to controlling, containing, and eliminating ASF. While ASF has never been found in the United States and does not threaten public health, an introduction would devastate U.S. pork producers, their communities, and the economy. APHIS has instituted a series of interlocking safeguards to prevent ASF from entering the United States and is working closely with States and industry to develop and refine plans in case of an outbreak. In 2021, APHIS confirmed ASF in the Dominican Republic and Haiti. APHIS deployed employees to the Dominican Republic to provide advisory services and help test samples and train staff. APHIS is also working with the Haitian authorities to expand surveillance to better determine the scope of the problem. APHIS also created a “protection zone” around Puerto Rico and the U.S. Virgin Islands to help keep the disease from spreading to those locations, mobilized additional staff to Puerto Rico to support the domestic swine monitoring response, is working on a large-scale eradication program for feral swine in Puerto Rico, and began a major outreach campaign in Puerto Rico and the U.S. Virgin Islands to ensure citizens, producers, and travelers know what actions to take to keep from unknowingly introducing the virus.

Trade Preservation
To open, re-open, and maintain U.S. access to worldwide export markets, APHIS negotiates science-based conditions with trading partners for various commodities that protect their country while also facilitating trade. APHIS’ efforts in 2021 facilitated and safeguarded more than $100B in trade for U.S. agriculture. Examples of APHIS’ successes in creating new market access this year include live cattle to Moldova worth an estimated $3 million per year; bovine genetics to Uzbekistan worth $500,000; and live cattle and bovine genetics to Gambia worth $500,000. APHIS also works to expand U.S. producers’ access to export markets and to retain markets that are threatened due to changing requirements in other countries or pest and disease outbreaks in the United States. APHIS worked with Kazakhstan to provide information that led that country to lift its restrictions on poultry products from California after the successful eradication of virulent Newcastle disease in that State and with Taiwan to lift restrictions on poultry products from South Carolina after detections of avian influenza. APHIS worked with Argentina on declarations for phytosanitary certificates for U.S. apples and pears from the Pacific Northwest, effectively reopening a market worth approximately $500,000 that had been closed since 2007. Finally, when shipments are delayed at foreign ports, APHIS negotiates the overseas process to get products moving again. APHIS successfully secured the release of 275 shipments worth approximately $84 million in FY 2021. Examples of these detained shipments that were released through our interventions on the ground included: millions of dollars’ worth of wheat exports to Mexico and Vietnam; apple and soybean exports to Taiwan; and beef and hay exports to Japan.

Animal Surveillance During COVID-19 Pandemic
APHIS played a critical role in the COVID-19 pandemic in helping to understand the spread of SARS-CoV-2 in and among animals and humans. While there is much more to understand about this disease, in FY 2021, the Agency conducted surveillance in wildlife as part of One Health investigations with state and federal partners to identify species that may serve as reservoirs or hosts for the virus, as well as understand the origin of the virus, and predict its impacts on wildlife and the risks of cross-species transmission. APHIS captured and sampled wild and free-roaming animals near SARS-CoV-2 infected mink farms in 4 states, expanding our understanding of the disease and how it is transmitted among domestic and wild animals. The Agency also collected and tested samples for exposure to SARS-CoV-2 from white-tailed deer across 4 states detecting antibodies to SARS-CoV-2 in 33 percent of the samples. None of the deer populations surveyed showed signs of clinical illness associated with SARS-CoV-2. In FY 2022, APHIS plans to continue its collaborative monitoring and surveillance efforts for SARS-CoV-2 in wildlife and other animals as part of the American Rescue Plan Act to better understand the impacts of the virus on animal and human health.

Clarifying Rules for Buying and Selling Seeds and Plants Online from Other Countries
Following a months-long investigation into thousands of reports from citizens who received unsolicited seed packages in the mail last year, APHIS published additional guidance to help online buyers and sellers comply with U.S. laws when they import seeds and live plants for planting from other countries. By explaining buyer and seller responsibilities; outlining required documents, such as import permits and phytosanitary certificates; providing information on plant and seed species that have additional import requirements; and making clear which types of plants and seeds are not allowed to be imported into the United States, APHIS helped protect agricultural and natural resources from potential invasive pest and disease threats. While APHIS confirmed that some of the seeds were sent to the United States unsolicited, others were seeds the recipients ordered—unaware they were coming from a foreign country. Regardless, most of the seed shipments were illegal because they entered the United States without a permit or a phytosanitary certificate.

Implementing Biotechnology Regulations
In FY 2021, APHIS fully implemented its revised biotechnology regulations (7 CFR part 340), which were published in May 2020, with a phased implementation. The revised regulations allow APHIS to regulate organisms developed using genetic engineering with greater precision and reduce regulatory burden for developers of organisms that are unlikely to pose plant pest risks. To fully implement the revised regulations, the Agency retired the petition process and fully implemented the Regulatory Status Review (RSR) process; retired the notification process and fully implemented a revised process for permit authorizations; developed guidance documents to assist applicants through the regulatory transition; updated internal processes for scientific review and compliance inspections to align with the revised rule; and held workshops and presentations with stakeholders and international representatives and partners to facilitate understanding and acceptance of the new regulatory approach.

Animal Welfare Act Enforcement
APHIS worked diligently to protect the welfare of animals from unscrupulous individuals, taking actions within our authority under the Animal Welfare Act to stop a number of bad actors. This year, those actions included initiating 118 cases for alleged violations of the AWA, issuing 58 official warnings, issuing 3 pre-litigation settlements resulting in the collection of $18,200 in stipulated penalties, and obtaining 8 administrative orders. In one case, working with the USDA’s Office of General Counsel (OGC), APHIS entered into a Consent Decision and Order relating to multiple violations of the AWA, which suspended the respondent’s AWA license for a term of five years. In two other cases, the Agency obtained administrative orders against individuals relating to alleged AWA violations, permanently revoking both respondent’s AWA licenses. In two other cases, APHIS worked closely with OGC and the Department of Justice’s Environment and Natural Resources Division to pursue enforcement action relating to multiple alleged violations of the AWA. The collective efforts resulted in 21-day license suspensions and swift administrative and civil enforcement. APHIS continues to post copies of enforcement records (such as initial decision and orders, default decisions, consent decisions, and administrative complaints) on its website: USDA APHIS | Animal Welfare and Horse Protection Actions.

Assisting with the Vaccinate America Campaign
APHIS deployed 465 volunteer employees across the nation this year to support the COVID-19 vaccination effort. APHIS personnel participated in the direct administration of approximately 400,000 vaccines and supported efforts to deliver hundreds of thousands more. Deployments started in January and ended in June, spanned 15 states and included virtual support.

FEMA was the lead Agency for this mission, and as an Agency staffed with people protecting American agriculture by responding to animal and plant disease emergencies, APHIS was uniquely qualified to assist them for this effort. APHIS deployed veterinarians and laboratory technicians to draw up and administer vaccines. The Agency provided trained incident management teams to help lead the functioning of specific vaccination sites. At other locations, APHIS employees served as safety officers, directed traffic, checked people in and took on other duties as needed. The APHIS partnership with FEMA assisted President Biden in exceeding his 100-day goal to vaccinate 100 million Americans. It was a true team effort; employees who did not deploy took on extra work to ensure the Agency’s essential duties remained covered.

What is workers' compensation insurance and why is it important?