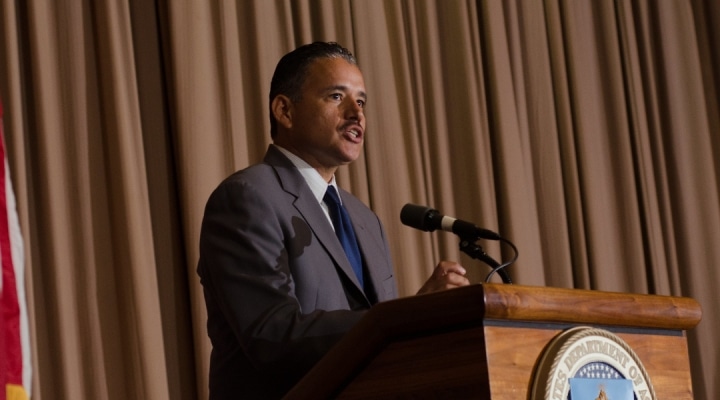 Oscar Gonzales was appointed to serve as Assistant Secretary for Administration at the USDA. (U.S. Department of Agriculture, Public Domain)

WASHINGTON — Oscar Gonzales was appointed by President Biden to serve as Assistant Secretary for Administration at the U.S. Department of Agriculture (USDA).

Previously, Gonzales served in the Obama Administration in several senior positions with USDA, including as Deputy Assistant Secretary for Administration as well as Deputy Chief of Staff for Operations and Senior Advisor on Immigration Reform to Agriculture Secretary Tom Vilsack. He also served as the California State Executive Director for USDA’s Farm Service Agency (FSA), where he oversaw FSA programs across 58 counties in the nation’s largest agricultural producing state. His government background includes working for top California leaders, including Governor Gray Davis, Assembly Speaker Antonio Villaraigosa, and Senate Majority Leader Gloria Romero. Most recently, Gonzales served as Vice President for Government Relations, Western States, for Goldman Sachs. Prior to that, he was Vice President for Community and Government Relations for Aura Financial, a CDFI-certified fintech company disrupting the predatory lending industry with loans that helped low income people.

Gonzales has a long track record of working at the federal and state level to advocate for social justice for underserved and marginalized communities with a focus on Hispanic communities. He worked for several years for the United Farm Workers Foundation. His wife, Christine Chavez, is the granddaughter of American labor and civil rights legend Cesar Chavez.

“Oscar has dedicated his life and career to fighting for underserved and marginalized communities,” said Agriculture Secretary Tom Vilsack. “He grew up in a working-class family in East Los Angeles and has worked at nearly every level in food and agriculture— from working on a horse farm to serving at the highest levels of leadership in state and federal government. With Oscar’s leadership and a team that reflects the diversity of our nation behind him, USDA is committed to ensuring equity across the Department, rooting out systemic racism and discrimination, and removing barriers to access to USDA programs.”

He is a graduate of the University California, San Diego and East Los Angeles College.

The egg in the X-ray beam