Subscribe
Home / Illinois / USAID extends partnership with U of Illinois 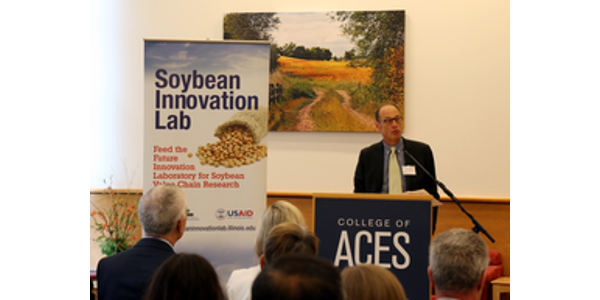 URBANA, Ill. — The United States Agency for International Development (USAID) announced an extension of a research partnership with the Feed the Future Innovation Lab for Soybean Value Chain Research (SIL) at the University of Illinois to help build the foundation of the soybean industry in emerging markets, principally in sub-Saharan Africa.

USAID awarded $6 million to the U of I to extend the Innovation Lab. The new three-year award adds to the $10 million awarded in 2013 from USAID, as well as multiple external grants totaling $2.4 million. The U of I, in partnership with the University of Missouri and Mississippi State University, leads the research program operated by 35 researchers in the United States and a similar number of researchers across Africa, along with numerous public and private sector partners overseas.

The announcement was made during a presentation at the College of Agricultural, Consumer and Environmental Sciences (ACES) Library, Information and Alumni Center, on the main U of I campus in Urbana.

During the presentation, College of ACES Dean Kim Kidwell spoke of the history of partnership between U of I and USAID. “We have a long history, dating back to the early 1960s, of implementing projects throughout the developing world to strengthen capacity in agricultural education and innovation,” Kidwell said. “We have trained many of the scientists and leaders who have worked tirelessly to conquer the problems of food insecurity in the nations of Asia, Africa, and Latin America, many of which have become emerging markets.

“Illinois was also home to the International Soybean Program (INTSOY), which was an important early effort to bring the world’s soybean germplasm resources to Illinois, and to help establish soybean as a truly global crop. Illinois has long been the center of the soybean industry in the United States, due to the foresight of soy processors who established production in central Illinois and the early adoption of soybean by our innovative farmers,” she added.

This extension builds on the successful history of partnership between USAID and U of I in developing solutions to enhance food security. As part of the Feed the Futureinitiative, SIL works to reduce global poverty and hunger by accelerating growth in the agriculture sector through improvements in agricultural productivity and processing among smallholder farmers.

“Soy is essentially a new crop in many areas of Africa where we’re working,” said Robert Bertram, chief scientist for USAID. “It wasn’t that long ago—within the lifetimes of some here—that it was a new crop in our own country, and we’ve seen how transformative it’s been here. So when this partnership began in 2013, the great challenge was how smallholder farmers can be part of that [soybean] revolution in Africa, how they can play a role such that they are no longer living lives of extreme poverty, suffering from undernutrition, seasonal hunger, diseases, and lack of access to education that go along with extreme poverty.

“On behalf of the entire agency, we are delighted that this program has been extended,” Bertram added.

Also remarking on the history of the partnership, Peter Goldsmith, director of SIL and professor in the Department of Agricultural and Consumer Economics at U of I, said, “Soybean is not an easy product from a policy perspective. U.S. policymakers correctly wonder if global soybean development is beneficial to the U.S. economy and if it’s appropriate for small holders. We first started discussing the partnership in 2011 or 2012, and what struck me talking to Bertram was the courage they had to be bold, use science, research, evidence, and the University of Illinois and partner universities to answer their questions.

“Many of us already knew the potential of tropical soybean to promote economic growth, reduce poverty, supply much needed protein and oil in tropical regions. We also knew how the U.S., because of its agricultural advantages benefits when other countries adopt soy as their industrial standard for feed and crude oil, and subsequently thrive economically. So thank you, USAID, for deferring to science and evidence and partnering with Illinois and its partners Missouri and MSU to explore critical new frontiers to eliminate poverty and hunger in the developing world,” Goldsmith added.

“SIL began in five countries, but has expanded to reach 17 countries – 13 in Africa and four in Asia and Latin America,” commented U.S. Senator Dick Durbin on the announcement. “SIL’s success is rooted in its use of science and technology in service to its development partners, and I’m proud to support and fight for federal funding for this impactful project.”

“The Soybean Innovation Lab’s research has reduced food insecurity throughout the world while increasing the international demand for soybeans grown here in central Illinois,” commented U.S. Representative Rodney Davis on the USAID extension with SIL. “I visited the lab this summer and saw firsthand how beneficial this research is and I am proud that USAID extended the funding for another three years.”

U.S. Representative Darin LaHood also commented on Monday’s announcement, “The Soybean Innovation Lab is a worldwide leader in the research and development of innovative technology to facilitate soybean production, which is vital to the economy of Central Illinois and maintaining global food security. I was pleased to lend my support for the important work SIL is doing and I am grateful to USAID for reaffirming their commitment to the SIL.”

U.S. Representative Cheri Bustos also remarked after Monday’s announcement, “I’m so proud to see the University of Illinois working to develop new technologies to improve the way we grow soybeans and feed the world. America’s heartland continues to lead the way in the international agricultural economy and I look forward to seeing continued success from this important work.”

Through Feed the Future, America’s initiative to combat global hunger, USAID is collaborating with more than 70 U.S. universities and colleges to conduct research and develop technologies that benefit agriculture, resilience and nutrition abroad and here in the United States.