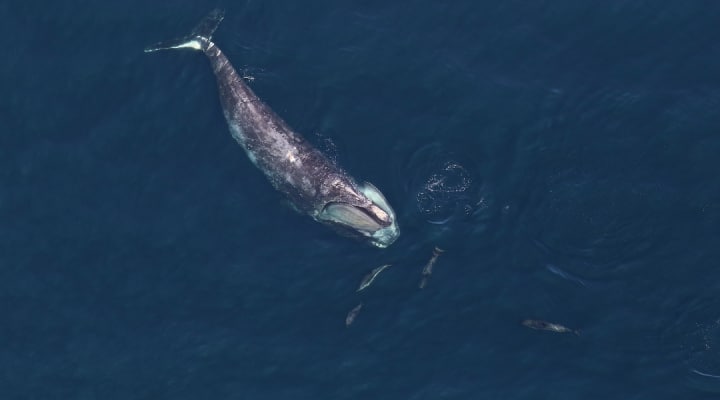 Right whales were once abundant off the East Coast, but they were decimated by hunting during the commercial whaling era. Their numbers have never recovered. (Photo: Allison Henry/NOAA, Public Domain)

PORTLAND, Maine (AP) — The profitable U.S. lobster fishery will soon have to contend with new rules designed to protect an endangered species of whale, and that could necessitate major changes for people in the industry.

The federal government is working on new rules designed to reduce risk to North Atlantic right whales, which number only about 360. One of the threats the whales face is entanglement in ropes that connect to lobster and crab traps in the ocean.

The new rules are expected to be released late this summer or early in fall, a spokesperson for the National Oceanic and Atmospheric Administration said. Early indications show that the changes required by the rules could be significant.

Right whales were once abundant off the East Coast, but they were decimated by hunting during the commercial whaling era. They’ve been listed as endangered since 1970, but the population remains small, and in jeopardy. Recent years have also brought high mortality and poor reproduction among the whales.

The rules will focus on reducing the number of vertical ropes in the water, and they’re also expected to modify restricted areas of ocean, the government has said. A conservation framework released by the federal government in May states that the first phase of rules will be designed to reduce risk to the whales by 60%.

Later phases, which could take effect by 2030, call for an almost complete reduction of risk to the animals. Members of the industry said that could make it harder to get lobsters to consumers.

The lobster industry is prepared to do its part to conserve the whales, but a near complete risk reduction would require a total overhaul of the fishery, said Patrice McCarron, executive director of the Maine Lobstermen’s Association.

“The fishery as we know it cannot exist, absolutely not,” McCarron said. “We can’t solve this whole issue if whales are dying in Canada, or getting hit by ships. Everybody’s very anxious to know what the rules actually say.”

The U.S.’s new whale rules will not go into effect immediately upon release, and it’s too early to say when they will go on the books, said Allison Ferreira, the NOAA spokesperson. She said the federal government will undertake a major outreach effort to help fishermen comply when the rules are available.

The rules are arriving at a time when the lobster industry, based mostly in Maine but also active elsewhere in New England and New York, has been very successful despite numerous challenges. Maine lobster has been worth more than $400 million at the docks for seven years in a row after never coming close to that number in its history, according to state records that go back to the 1880s.

Lobsters are also popular at the moment with consumers, who are paying higher than average prices for them this summer.

The fishery has weathered high bait prices, the coronavirus pandemic, economic turmoil with China and other difficulties in the last five years and managed to stay afloat. But whale rules represent a challenge that could make it more difficult to get lobsters to customers, said Beth Casoni, executive director of the Massachusetts Lobstermen’s Association.

“When 700 fishermen are not on the water, there’s less lobster,” Casoni said.

Energy and the dairy cow to be discussed in upcoming webinar