Home / National / US lifts Brazilian beef import ban amid quality concerns
A new user experience is coming! We'll be asking you to login to your Morning Ag Clips account March 1st to access these new features.
We can't wait to share them with you! Read more here. 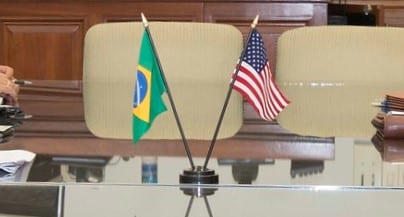 Cattlemen and food safety groups are voicing concerns about the quality of Brazil's meat. (U.S. Department of Agriculture, Flickr/Creative Commons)

DES MOINES, Iowa (AP) — The federal government has decided to once again allow raw beef products to be imported into the United States from Brazil, a move that has angered some cattlemen and food safety groups who are voicing concerns about the quality of the meat.

A spokeswoman for the U.S. Department of Agriculture’s Food Safety and Inspection Service said Friday the agency recently conducted on-site audits of Brazil’s raw beef production facilities to verify improvement in practices since 2017, when the USDA suspended importation of Brazilian beef over safety concerns.

“FSIS confirmed that Brazil has implemented necessary corrective actions and has determined that Brazil’s food safety inspection system governing raw intact beef is equivalent to that of the U.S.” the agency spokeswoman said.

She said the suspension ended Friday. Raw beef from Brazil will be “subject to re-inspection” at U.S. ports of entry, she said.

A spokesman for the National Cattlemen’s Beef Association said the group has concerns about quality given Brazil’s history of foot-and-mouth disease and its record of repeated food safety violations at ports-of-entry.

“You can rest assured that NCBA will keep an eagle eye focus on all developments with Brazil and we expect nothing less than the highest level of scrutiny from USDA and customs officials,” said Kent Bacus, the group’s senior director of international trade and market access, in a statement.

“It took two U.S. taxpayer-funded audits this past year for Brazil to have allegedly gotten its act together. We are not convinced,” said Tony Corbo, a spokesman for the group.

He said consumers will be taking a gamble every time they eat beef in the United States because there will be no country-of-origin labeling requirements on Brazilian beef.

Still time to complete your Census of Ag Special Study