Home » US accuses Russia of weaponizing food in Ukraine war 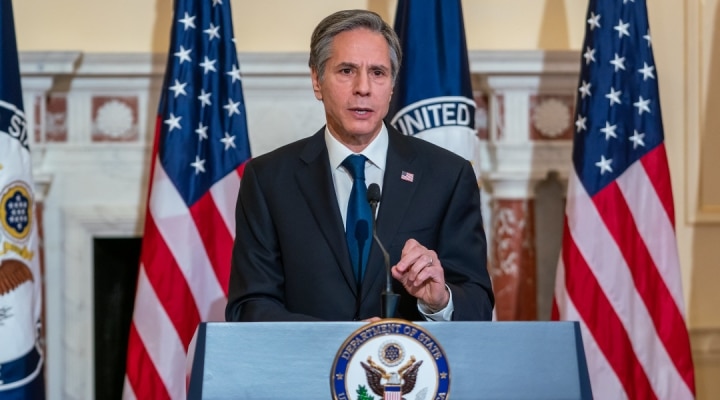 UNITED NATIONS (AP) — U.S. Secretary of State Antony Blinken accused Russia on Thursday of weaponizing food and holding grain for millions of people around the world hostage to help accomplish what its invasion of Ukraine has not — “to break the spirit of the Ukrainian people.”

He told a U.N. Security Council meeting called by the United States that the war has halted maritime trade in large areas of the Black Sea and made the region unsafe for navigation, trapping Ukrainian agricultural exports and jeopardizing global food supplies.

Blinken said the meeting, which he chaired, was taking place “at a moment of unprecedented global hunger” fueled by climate change and COVID-19 “and made even worse by conflict.”

Since Russia’s invasion on Feb. 24, he said, its naval operations have sought to control access to the northwestern Black Sea and the Sea of Azov and to block Ukrainian ports which the United States assesses to be “a deliberate effort” to block safe passage and shut down shipping.

“As a result of the Russian government’s actions, some 20 million tons of grain sit unused in Ukrainian silos as global food supplies dwindle, prices skyrocket, causing more around the world to experience food insecurity,” Blinken said.

Russia’s U.N. Ambassador Vassily Nebenzia dismissed as “absolutely false” claims by the U.S. and Western nations “that we want to starve everyone to death and that only you and Ukraine allegedly care about how to save the lives of the country.”

“You assert that allegedly we are preventing agricultural products from being taken out of Ukraine by sea,” he said. “However, the truth is that it is Ukraine and not Russia that has blocked 75 vessels from 17 states in the ports of Nikolaev, Kherson, Chernomorsk, Mariupol, Ochakov, Odesa and Yuzhniy and has mined the waterways.”

Nebenzia warned that “unless this issue is resolved, we cannot speak of any opportunities to export Ukrainian grain by sea.”

He stressed that Russia remains “a responsible supplier of both food and energy.”

Russia expects a record wheat crop and can offer to export 25 million tons of grain from Aug. 1 until the end of the year through the Novorossiysk port, he said, and it is also ready to discuss at least 22 million tons of fertilizer for export from June to December.

“If you do not want to lift your sanctions of choice, then why are you accusing us of causing this food crisis?” he asked. “Why is it that as a result of your irresponsible geopolitical games, the poorest countries and regions must suffer?”

Blinken called Russia’s claims that sanctions are to blame for the worsening global food crisis false, declaring that “the decision to weaponize food is Moscow’s and Moscow’s alone.”

Blinken said sanctions imposed by the U.S. and many others aren’t preventing Russia from exporting food and fertilizers because they exempt exports of food, fertilizer and seeds. “And we’re working with countries every day to ensure that they understand that sanctions do not prevent the flow of these items,” he said.

U.N. food chief David Beasley warned the Security Council that the war in Ukraine has created “an unprecedented crisis” of escalating food prices that are already sparking protests and riots and growing hunger that will add at least 47 million people to the 276 million “marching to starvation” before Russia’s invasion of its smaller neighbor.

The executive director of the World Food Program said 49 million people in 43 countries are already “knocking on famine’s door.”

Beasley recalled that when food prices got out of control in 2007 and 2008 over 40 countries faced political unrest, riots and protests.

“We are already seeing riots and protesting taking place as we speak — Sri Lanka, Indonesia, Pakistan, Peru,” he said. “We’ve seen destabilizing dynamics already in the Sahel from Burkina Faso, Mali, Chad. These are only signs of things to come.”

Beasley urged world leaders to do everything possible “to bring the markets to stability because things will get worse.”