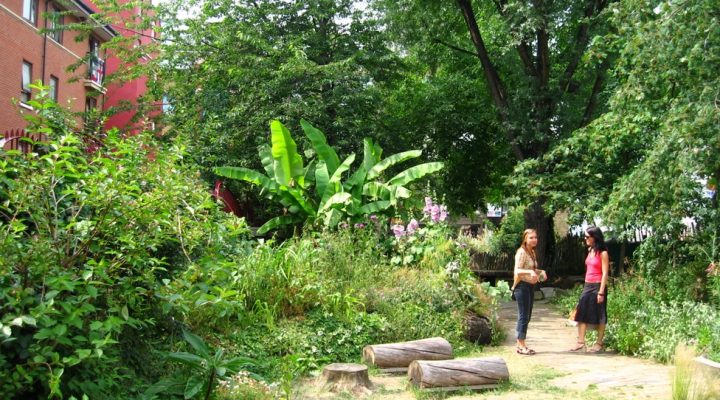 The garden was born from a city effort to get rid of eyesore vacant lots that emerged throughout Phoenix following the 2008 financial crisis that hit the city's then-hot real estate boom extremely hard. (Uri Baruchin, Flickr/Creative Commons)

PHOENIX — A sprawling urban garden on a vacant lot where Phoenix residents have grown everything from melons to okra closed Friday after the gardeners were mysteriously ordered out as a federal agency reassumes ownership of the land, stupefying and angering gardeners who called their eviction a classic case of government dysfunction.

Families, senior citizens and refugees spent the last week harvesting their final crops and expressing frustration that the U.S. Department of the Interior won’t say why they have to leave or what it plans for the 15 acres of land in the shadow of high-rise apartment buildings and next to a commuter light rail station.

The department is getting the land back from a Florida-based developer that bought it decades ago but stopped making payments promised to two Native American education trusts. The developer now owes about $60 million and is immersed in several related lawsuits, including one being settled now that gives the lot back to the government.

Caught in the middle are the gardeners, who turned the ugly lot into a tidy, verdant grow-your-own food area in Phoenix’ centre.

“That lot was a fenced-in, locked-up vacant eye sore on the busiest intersection in the city of Phoenix for 20 years. We beautified it and now it’s gonna go back to being dust and Bermuda grass,” said Tom Waldeck, the chief executive of the non-profit Keep Phoenix Beautiful group.

The garden was born from a city effort to get rid of eyesore vacant lots that emerged throughout Phoenix following the 2008 financial crisis that hit the city’s then-hot real estate boom extremely hard.

The lot’s owner, Florida-based Barron Collier Companies, had obtained the land from the federal government and agreed to allow the gardeners in. One large section of the lot was reserved for the International Rescue Committee, which helps refugees who cultivated vegetables from their home countries that they can’t find in supermarkets.

“Complying with the request to vacate the property presents a challenge to the city of Phoenix, Keep Phoenix Beautiful and their community partners, many of whom are nonprofits who are actively engaged in community projects on site,” McCain wrote.

Phoenix’s balmy climate lets the 150 or so gardeners grow their fruit and vegetables in small plots all year long with water supplied from a nearby canal and from the city of Phoenix. The city’s mild winter is best for broccoli, cauliflower, herbs and tomatoes while the scorching summer is good for cucumbers and melons. The garden uses about $1,200 of water monthly.

The refugees resettled in Phoenix by the International Rescue Committee often grew food from their countries that they can’t find in local supermarkets. Among them was Tareke Tekie, an Eritrean refugee, who said through an interpreter that he grew okra and a leaf he can’t buy anywhere in the U.S.

Joanne Beard started growing vegetables like broccoli and kale as a form of physical and mental therapy after she suffered a heart attack in 2013, and is angry that an empty space she helped make useful is going away.

“It’s helped me heal my body and my mind. I call it my therapy,” Beard said. “You know, this used to be just a trashed corner. It used to be so ugly, and we just made it so beautiful.”

The lot was home many years ago to the Phoenix Indian School for Native American children operated by the U.S. Bureau of Indian Affairs.

The federal government in 1988 agreed to trade it to Barron Collier for about 100,000 acres of Florida Everglades swampland that officials wanted to preserve in a deal considered the largest land trade in U.S. history.

The Florida land was valued lower than the Phoenix land, so Barron Collier agreed to pay $34.9 million plus interest to two Native American education trust accounts.

Payments started in 1997 but Barron Collier stopped making them in 2012, blaming a drop in the land’s value, according to a letter from the company to the Department of Interior dated Jan. 7, 2013. The company declined to comment.

Keep Phoenix Beautiful is looking into the possibility of using a nearby half-acre lot to relocate some of the gardeners, but there wouldn’t be enough room for all of them. Four and a half acres alone in big lot were being used by the refugees, Waldeck said.

And the sense of community the gardeners developed as they tended their crops with neighbours didn’t know before is gone for the foreseeable future, Waldeck said.

“It’s a community space and these are people who lived next door to each other and never, ever knew they existed,” he said. “We’ve had weddings, cookouts, Christmas parties here. The community aspect is really the hardest thing to take.”