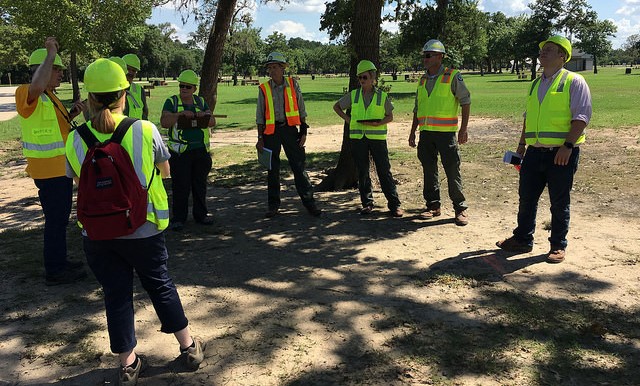 Urban Forest Strike Teams come to the aid of a region whose urban forest has been impacted by a natural disaster. (Courtesy Photo; Southern Foresters, Flickr)

HOUSTON — Months after the storm, Hurricane Harvey may still be causing damage. Urban Forest Strike Team members from across the nation examined trees in Harris County Bear Creek Park this week for effects of prolonged flooding.

Bear Creek Park was under approximately four feet of water for several months post Harvey. This amount of time under water may have caused damage to the root systems of trees and can sometimes take months or years to show up.  The sample surveys are being conducted now, nine months after the storm event for just this reason.

“A lot of these trees left out here looked okay during the spring,” said Paul Johnson, Texas A&M Forest Service Urban and Community Forestry program Leader. “And then, over the last month or so as summer set in, they really started to drop their leaves and are dying back.”

Flood-impacted trees can pose dangers to people and property. Urban Forest Strike Teams come to the aid of a region whose urban forest has been impacted by a natural disaster. Strike teams provide tree damage and risk assessments and Federal Emergency Management Agency public assistance information to communities.

Houston’s trees were subjected to prolonged flooding and will show signs of weakening different from the severe wind damage seen along Texas coastal communities during the hurricane.

In September 2017, an Urban Forest Strike Team deployed to coastal communities following Hurricane Harvey’s landfall.  In Rockport, Texas, strike team responders walked the streets and entered real-time information into a GIS mapping program, which instantaneously compiled and analyzed incoming information on which trees were impacted, where they were located, how extensive the damage was and whether the damaged trees posed a risk to the community.

Their assessment indicated that Rockport lost approximately 20 percent of its public trees with 1,300 more needing to be removed or requiring care.

Information gathered this week in Houston will be provided to the City’s Precinct 3 Parks and Recreation Department for their use. The sample assessments were made as part of a strike team training for task specialists hailing from multiple state, federal and private organizations.

View photos of the strike team in Houston at http://ow.ly/vbIM30kIrwt

South Korea reaches out to Texas A&M for help