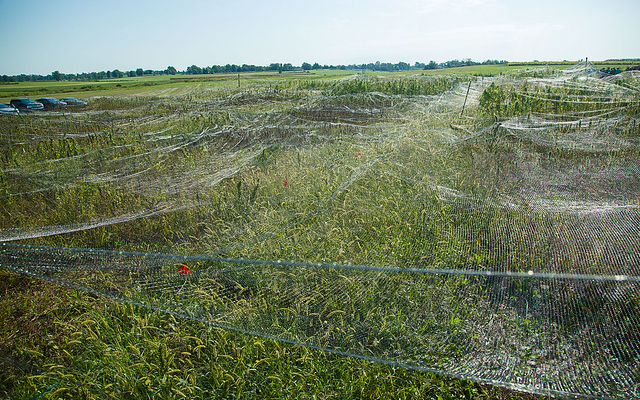 Today, the term “heavy” metal has been replaced by the term “trace” metal to reflect that these elements are often present at relatively low to modest concentrations in the soil, as compared to other elements such as calcium (Ca), magnesium (Mg), iron (Fe) or aluminum (Al). (phot by UK College of Agriculture, Food & Environment, creative commons/flickr.com)

RALEIGH, N.C. — Hemp and Trace (Heavy) Metals It is our understanding that some processors are asking growers to test their fields for the presence of “heavy” metals. Traditionally, the reference to “heavy” metals has meant those considered potentially toxic to plants and animals including arsenic (As), cadmium (Cd), chromium (Cr), lead (Pb), nickel (Ni), and lastly mercury (Hg). Copper (Cu), zinc (Zn), and selenium (Se) can also be present at toxic levels depending on the past or current use of a given location. Today, the term “heavy” metal has been replaced by the term “trace” metal to reflect that these elements are often present at relatively low to modest concentrations in the soil, as compared to other elements such as calcium (Ca), magnesium (Mg), iron (Fe) or aluminum (Al).

Why are These Trace Metals Present in Our Soil?

It is important to understand that in most all cases, these elements are present in our soils throughout North Carolina, primarily due to geology and how our soils have been formed. In many cases, the primary source of the trace metals is the result of natural processes (e.g. weathering). Other sources are for the most part man-made and include fertilizers (mostly phosphate fertilizers), biosolids, and other potential soil amendments (e.g. some liming materials) and industrial waste products. A primary source of additional arsenic, copper and zinc is animal manures, and it is important to follow nutrient management plans to avoid building up excess levels of these metals in our soils.

The other reason these metals are present is because they are relatively immobile once they are introduced into the soil environment, especially at soil pH values recommended for optimum crop production. In other words, most trace metals do not leach out of the soil profile. This is both a positive and a negative. Higher immobility also generally means lower plant availability. However, it also means that prior land use can have a direct bearing on a soils metal content, and therefore on a succeeding crop such as hemp that may exhibit a greater ability to remove metals from the soil.

The last source of metals is the atmosphere. In rural regions that applies specifically to mercury. Because elemental mercury can exist as a vapor, it is present in the atmosphere and is adsorbed onto soil and plant surfaces. Fortunately, the amounts in most cases are at ultra-trace levels, unless a site has been specifically impacted by mercury-containing waste.

What are Safe Levels of Soil Trace Metals for Hemp Production?

Unfortunately, at the moment there is no direct answer to this question. There is no soil test database relating soil test levels and potential trace metal uptake by hemp. In other words, nobody can tell you how much arsenic or cadmium in a soil is too much at this point in time. In addition, some of the trace (heavy) metals of interest are present at such relatively low soil concentrations that deriving the more traditional soil test vs. plant uptake relationships may be very challenging, especially if a plant exhibits a tendency to bioaccumulate a specific metal or metals.

An alternative is to follow the more traditional approach of determining the “total” elemental content present of a specific trace metal and comparing that to distributions of metals found in NC soils based on past experience. An example of this is the question of trace metals in urban soils and potential risks for urban gardens, especially on landscapes where past land use is unknown or in areas that have been highly disturbed. Based on prior work, a “natural” range of trace metals found in soils in North Carolina urban environments has been assembled (see Minimizing Risks of Soil Contaminants in Urban Gardens ). This publication also gives you an idea of what prior activities could lead to high levels of trace (heavy) metals in soils. The reported ranges typical for urban soils are listed below in units of parts per million (ppm). The remediation goal for cleanup of contaminated site is also listed in parentheses:

However, the reported ranges listed above are probably too large for most agronomic soils in NC, especially those being targeted for hemp production. A more realistic expectation is listed below based on a systematic survey of NC published by the US Geological Survey, US Dept. of Interior, in 2013 (again the units are ppm):

These values are considered more realistic for NC agronomic soils and demonstrate the relatively narrow range for these trace metals that most producers will likely encounter.

Is it Worth Knowing the Trace Metal Content of Your Soils?

Given the discussion outlined above, is there value in knowing the trace (heavy) metal content of the soils in fields selected for hemp production? Why are processors asking for “heavy” metal soil testing since we have no direct way to predict what a given soil heavy metal level will equate to in terms of plant uptake? We cannot speak for the processors, but here are a number of reasons why knowing the trace metal content of your soil may be worthwhile:

We anticipate that these early days of hemp production in NC will quickly pass and accumulating information will lead to processors deducing critical metal levels in soils for hemp. These critical levels will most likely be associated with “total” analyses of metals in soils given the range in metal contents as denoted above. Now is the opportunity for producers to contribute to the growing soils database so that delineation of what is “normal” can be made with a high degree of confidence and be reflected of hemp production throughout the state.