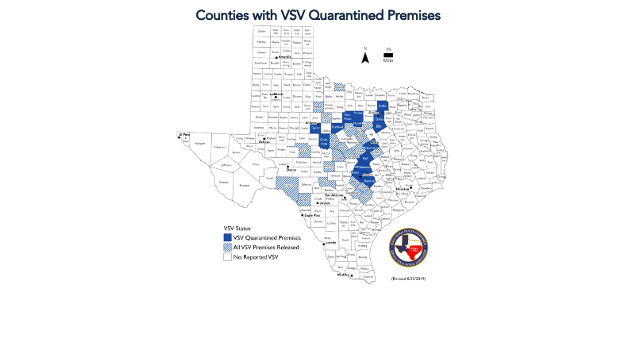 Affected horses and cattle will be monitored by regulatory and authorized veterinarians until premises are eligible for quarantine release 14 days after clinical VSV signs are observed. (Courtesy Photo)

AUSTIN — Since Friday, August 23, 2019, the Texas Animal Health Commission has received reports of 5 new confirmed cases of vesicular stomatitis virus (VSV) and 4 new suspect cases in counties where VSV has been previously confirmed.

The newly confirmed and suspect premises are under quarantine by the TAHC. Affected horses and cattle will be monitored by regulatory and authorized veterinarians until premises are eligible for quarantine release 14 days after clinical VSV signs are observed.

Classification of Cases
Premises that have laboratory diagnostic confirmation of VSV are categorized as confirmed positive premises. Once a county is confirmed as VSV-positive, new premises presenting with clinical signs of VSV in that county are not required to be tested for confirmation of the disease, but the premises will be quarantined and classified as a suspect premises.

Summary of the Outbreak
The 2019 VSV outbreak began on June 21, 2019, when the National Veterinary Services Laboratories (NVSL) in Ames, Iowa confirmed the first VSV-positive premises in Kinney County, Texas. All cases of VSV had been found on equine premises until July 30, 2019 when the first case of VSV was confirmed in cattle in Gonzales County. New Mexico, Colorado, Nebraska, Oklahoma, Utah, and Wyoming broke with VSV cases confirmed by NVSL. 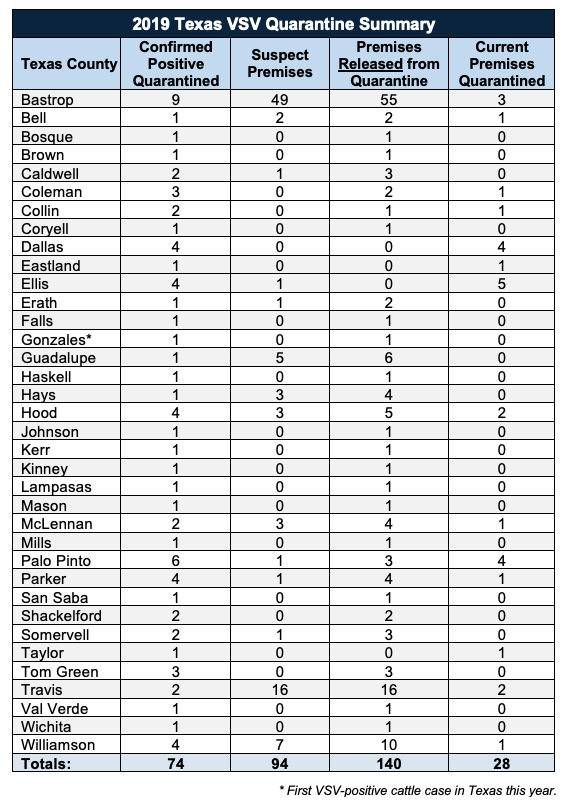 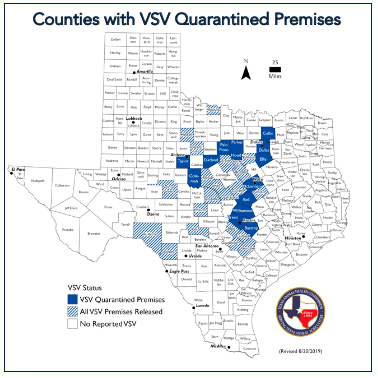 Strategies for Preventing VSV
Even with the best defensive measures, VSV could infect a herd. However, these tips may help protect livestock:

TAHC sends out VSV updates every Friday and all cases will be reported to the Equine Disease Communication Center. For VSV history and past TAHC updates click here.To view the USDA 2019 VSV situation reports click here.

All rabbit exhibitions banned in Oklahoma for 90 days
June 28, 2020