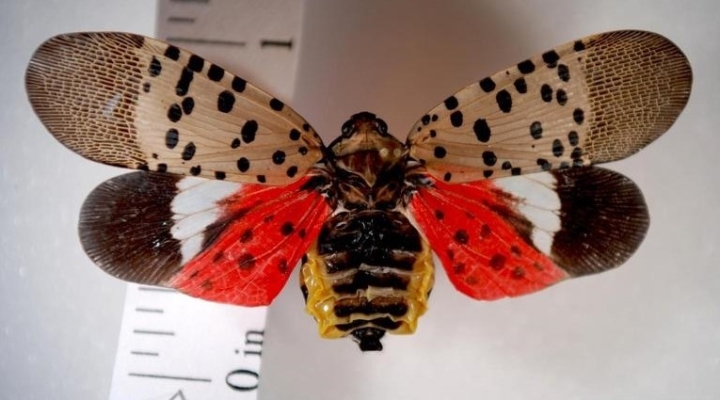 In the fall, spotted lanternflies will lay their eggs on any flat surface such as vehicles, firewood, outdoor furniture, stone or other items which can be inadvertently transported to new areas. (Photo courtesy of Pennsylvania Department of Agriculture)

ALBANY — The New York State Departments of Environmental Conservation (DEC) and Agriculture and Markets (DAM) today announced that although freezing temperatures will kill off adult spotted lanternflies (SLF), the public is urged to stay vigilant and report overwintering egg masses. In the fall, SLF will lay their eggs on any flat surface such as vehicles, firewood, outdoor furniture, stone or other items which can be inadvertently transported to new areas. If this insect becomes established in New York, it could impact New York’s forests, agricultural and tourism industries.

“To date, there has not been a documented spotted lanternfly infestation in New York, but I encourage the public to stay aware and be ready to report egg masses or other signs of this insect to help prevent infestations,” said DEC Commissioner Basil Seggos. “DEC continues to work proactively with our partners at the State Department of Agriculture and Markets to keep spotted lanternfly out of New York State through outreach, education, and tracking locations where this destructive invasive pest has the most potential to affect the state’s agricultural and tourism industries.”

State Agriculture Commissioner Richard A. Ball said, “Infestations of this pest could wreak havoc on New York’s agricultural industry, especially the forestry industry and the specialty crops that our State is known for.  We will continue inspections, enforcement of the quarantine regulations, and outreach, and ask farmers, outdoor enthusiasts and all New Yorkers to also remain alert and watch for signs of spotted lanternfly egg masses, which can survive through the winter.”

SLF, an invasive insect from Asia, is a destructive pest that feeds on the sap of more than 70 plant species including tree-of-heaven, maples, apple trees, grapevine, and hops. In infested areas, feeding by sometimes thousands of SLF can stress plants, making them vulnerable to disease and attacks from other insects. SLF excrete large amounts of sticky “honeydew,” which attracts sooty molds that interfere with plant photosynthesis, negatively affecting the growth and fruit yield of plants. The accumulation of honeydew under infestations, along with the swarms of insects it attracts, can also significantly hinder outdoor activities.

While these insects can jump and fly short distances, these pests spread primarily through human activity. SLF lay their eggs starting in the fall on surfaces including vehicles, stone, rusty metal, outdoor furniture, and campers, and can hitch rides to new areas when these objects are moved. Egg masses are one-inch-long and are often smooth and brownish-gray with a shiny, waxy coating when first laid. Over time, egg masses become brown and scaly.

SLF was first discovered in Pennsylvania in 2014, and has since been found in New Jersey, Delaware, Maryland, and Virginia. Given the proximity of the Pennsylvania and New Jersey infestations, there is a high risk of SLF becoming established in New York. DEC and DAM have not confirmed any SLF infestations to date, but several individual adult SLF have been found in counties across New York including: Delaware; Albany; Yates, Westchester, Suffolk, New York, Kings, Monroe, Chemung, Erie, Ontario, Ulster, Nassau, Sullivan, and Orange.

To slow the spread of SLF, DAM issued an “external” quarantine that restricts the movement of goods brought into New York from quarantined areas in Delaware, New Jersey, Pennsylvania, Maryland, and Virginia. The external quarantine requires regulated articles, such as packing materials, landscaping and construction equipment, and nursery stock – including Christmas trees — to have certificates of inspection issued from the impacted states. Inspections are conducted across New York by DAM and its partners to check for SLF and compliance with the regulations. Visit DAM’s website for more information and for a list of regulated articles.

Assistance from the public is crucial in limiting the movement of SLF and protecting New York’s natural resources. DEC and DAM are urging the public to inspect outdoor items such as vehicles, outdoor furniture and camping equipment for egg masses or insects, and report any sightings by sending photos and location information to spottedlanternfly@dec.ny.gov. Anyone that visits locations of SLF quarantines in other states should look for and remove insects and egg masses on items before leaving those areas. For more information, please visit DEC’s spotted lanternfly webpage.