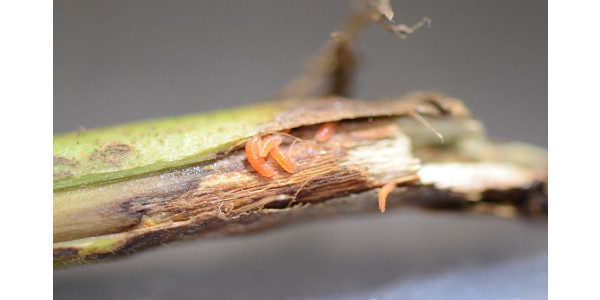 Recently described as a new species, the soybean gall midge, Resseliella maxima (Gagné), is the first member of the genus Resseliella reported from soybean. It is a member of the rather large and diverse family of flies, the gall midges (Diptera: Cecidomyiidae).

The larvae of many gall midges feed on galls formed in plant tissues. However, some species do not form galls. Some feed on fungi and decaying organic matter, and the beneficial aphid midge is a predator of aphids. Other crop pest species include the wheat pests, Hessian fly and wheat blossom midge, and a species that is a pest of Asian soybeans.

Discovery of gall midge in the Midwest

In June 2018, soybean growers in western Nebraska, eastern Iowa and eastern South Dakota began to notice soybeans wilting and dying, particularly along field edges. The stems were brittle near the base with dark lesions. Beneath the epidermis of the lower stem of affected plants, they found small, orange, gall midge larvae. Later in the season, soybean stems were breaking where the midge injury occurred. Crop losses were significant in many fields.

In August 2018, we received samples from a Rock County, MN soybean field where small, pale to bright orange gall midge larvae infested lower portions of soybean stems below the epidermis (Figure 1). In this field, and another in Rock County, injury symptoms were similar to those reported in neighboring states.

There appeared to be two types of soybean gall midge reported in MN during 2018. Additional reports from southeast, central and west central Minnesota found gall midge larvae most often associated with Sclerotinia white mold. The larvae were found on all parts of the stem, not just under the epidermis of the lower stem. They were found in white mold mycelia on the stem surface, inside the stem pith (Figure 2) and also, more rarely, inside pods (Figure 3).

Based on differences in how soybean was being injured, it was suspected that more than one species of midge may be involved. Larvae from a Rock County and a McLeod County infestation were submitted for comparison with those collected in other states.

Recently, Dr. Ray Gagne determined both of these types of infestations were from the same species, Resseliella maxima. This means that this insect, and its potential for damage, may be widespread in Minnesota (Figure 4).

Little is known about the insect’s biology and less is known about management. Will this gall midge persist in areas where it caused economic concern in previous years? Will the soybean gall midge eventually cause economic problems over a wider geography, including MN soybean fields? What management tactics will be effective? With the help of soybean checkoff funding, researchers in several states are working to find the answers needed to understand economic risk and develop management strategies.

It is unlikely that you will encounter any of the tiny, 1/4-inch-long mosquito-like soybean gall midge adults with distinct banding on the legs (Figure 5). During 2019, look for damage from the larvae. Look for wilting soybean plants, particularly on field edges adjacent to 2018 soybeans. Peel back the soybean stem epidermis and split stems to look for the small white to orange larvae.

We are looking for fields to collect soybean gall midge adults and larva as well as isolate any associated soybean pathogens.

All photos credited to Bruce Potter, University of Minnesota, unless otherwise noted.