Subscribe
Home / Colorado / Up to 48 extinctions prevented by conservation 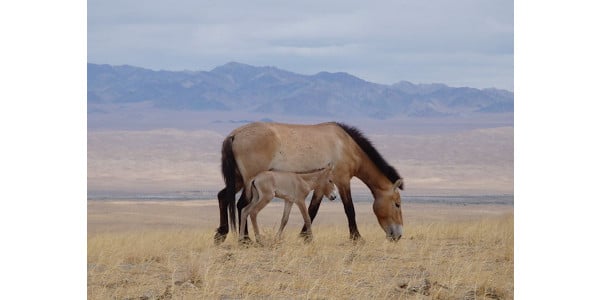 FORT COLLINS, Colo. — This story was adapted from a news release created by Newcastle University.

Conservation action has prevented the global extinction of at least 28 bird and mammal species since 1993, according to a study led by Newcastle University in the United Kingdom and BirdLife International. Colorado State University’s Sarah King, research scientist in the Natural Resource Ecology Laboratory, is a co-author of the study, published September 10 in Conservation Letters.

The international team of scientists estimated that up to 32 bird and 16 mammal species would have disappeared forever without conservation efforts in recent decades. The species highlighted include Przewalski’s horse, Iberian lynx and the Black stilt, a wading bird found in New Zealand, among others.

King, who has been studying the Przewalski’s horse for 20 years, described the animal as prehistoric and similar to horses portrayed in ancient cave paintings. The horses went extinct in the wild in the 1960s.

In the 1990s, conservationists began reintroduction efforts and in 1996, the first Przewalski’s horse was born in the wild. Now, more than 760 of these horses are roaming the steppes of Mongolia once again.

The study highlights the most frequent actions to prevent extinctions in bird and mammal species. Twenty-one bird species benefited from invasive species control, 20 from conservation in zoos and collections and 19 from site protection. Fourteen mammal species benefited from legislation and nine from species re-introductions and conservation in zoos and collections.

The research team identified bird and mammal species that were listed as threatened on the International Union for the Conservation of Nature’s (IUCN) Red List.

They subsequently compiled information from 137 experts on the population size, trends, threats and actions implemented for the most threatened birds and mammals to estimate the likelihood that each species would have gone extinct without action. Their findings show that without conservation actions, extinction rates would have been around three to four times greater.

One of the species the team evaluated was the Puerto Rican amazon, a small parrot species that lives on the island of Puerto Rico. The formerly abundant population was at its lowest in 1975, when only 13 individuals remained in the wild. Since 2006, efforts were made to reintroduce the species to the Rio Abajo State Park on Puerto Rico. In 2017, hurricanes wiped out the original population, leaving only the reintroduced population at Rio Abajo.

Other species remain only in captivity, but there are opportunities for such species to be reintroduced into the wild. This gives hope that other species that are now only held in zoos, collections, or for plants in botanic gardens and seed banks, will be successfully returned to the wild in the future.

The Denver Zoo houses a small herd of Przewalski’s horses, and this type of conservation is critical, said King, who has served as co-chair of the IUCN Species Survival Commission Equid Specialist Group since 2007.

“Zoos get bashed a lot, but they have prevented the extinction of species,” she said.

Some species included in the study, such as the vaquita, a species of porpoise found in the northern end of the Gulf of California, are still rapidly declining.

King said that while conservation actions have been very helpful for some species, others may yet go extinct.

Rike Bolam, lead author of the study and a post-doctoral research associate from Newcastle University, said the analyses provide a strikingly positive message that conservation has substantially reduced extinction rates for birds and mammals.

Professor Phil McGowan, a co-author from Newcastle University who leads the IUCN Species Survival Commission task force, said that while the study provides a glimmer of hope, “we mustn’t forget that in the same period, 15 bird and mammal species went extinct or are strongly suspected to have gone extinct.”

“We usually hear bad stories about the biodiversity crisis and there is no doubt that we are facing an unprecedented loss in biodiversity through human activity,” said McGowan. “The loss of entire species can be stopped if there is sufficient will to do so. This is a call to action: showing the scale of the issue and what we can achieve if we act now to support conservation and prevent extinction.”