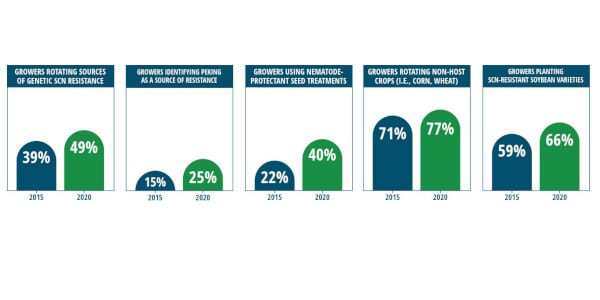 WAUKESHA, Wis. — Results of a quantitative study funded by The United Soybean Board (USB) reveal outreach conducted by The SCN Coalition has moved more soybean growers to actively manage soybean cyst nematode (SCN), the No. 1 yield-grabbing pathogen of the soybean crop in North America. Depending on the tool(s) growers use, 6% to 18% more are actively managing SCN resistance than in 2015, which protects soybean yields and profitability.

In 2020, the Coalition repeated a 2015 study of nearly 1,000 soybean growers in 17 states.1 In 2015, the study revealed only 39% of growers were rotating sources of genetic SCN despite the overuse of PI 88788, a source of SCN resistance used in 95% of SCN resistant soybean varieties, which has led to reduced effectiveness at protecting yields against SCN. However, results from the 2020 survey showed that 49% of soybean growers are now rotating sources of genetic SCN resistance and 25% identified Peking as their resistance source.

Additionally, the study revealed growers view the ag media, their seed dealer and university/extension experts as one of their top sources for making SCN management decisions. The Coalition also asked questions not asked in 2015 and learned a majority of growers agreed that checkoff-funded research was important to bringing new tools to better manage SCN in the future.

USB Director and Iowa soybean farmer Tom Oswald said it’s encouraging to learn soybean growers recognize the impact and importance of the checkoff. “With the help of checkoff funding, The SCN Coalition has been successfully disseminating their message about active SCN management to soybean growers, which improves sustainability of U.S. soybean production,” he said. “The study also shows a well-orchestrated effort between public and private partners can successfully elicit change in the soybean industry at a rapid pace.”

In the 2020 study, soybean growers reported they perceive SCN reduces yield by 5.1 bu. per acre. However, data from 15 years of variety trial experiments in growers’ fields in Iowa revealed increased reproduction of SCN populations on PI 88788 resistant varieties can decrease yield by as much as 14 bu. per acre,2 which represents a 23% yield loss.

Based on that information, the projected economic impact of The SCN Coalition is staggering. Surveyed growers capturing an additional 5.1 bu. per acre added $48.45 per acre to their bottom line based on an average price of soybeans of $9.50 during that time. Those growers can look forward to capturing an additional $70.63 an acre based on USDA’s projected 2021-crop soybean price of $13.85.

North Dakota State University Plant Pathologist and Coalition leader Sam Markell said survey results showcase the impact of an effective public/private partnership. “The SCN Coalition has ignited tens of thousands of growers to actively manage SCN, which impacts millions of soybean acres annually,” he said. “That many more growers protecting their yield from the number one yield-robbing disease in the U.S. translates into hundreds of millions of dollars in soybean growers’ pockets.”

Markell is thankful soybean growers see the benefit of the checkoff, which also supports research aimed at providing new practical tools in the future in the fight against SCN. “Scientists are making discoveries that will improve sustainability of the soybean supply,” he said. “It’s critical to keep our private partners informed about this research so they are better equipped with the resources needed to bring these tools to soybean growers in the future.”

North Central Soybean Research Program Executive Director Ed Anderson agrees that SCN research should give soybean growers confidence for the future. “The SCN research spectrum is very broad, and I’m proud of the investment soybean farmers make through their checkoff,” he said. “Checkoff-funded research has identified new resistance genes and strategies that companies, in the future, can provide growers as longer-term solutions.”

Visit TheSCNCoalition.com to learn more about actively managing SCN and to get recommendations specific to your state provided by university and Extension experts.