Home » 'Up on the Hill' forever 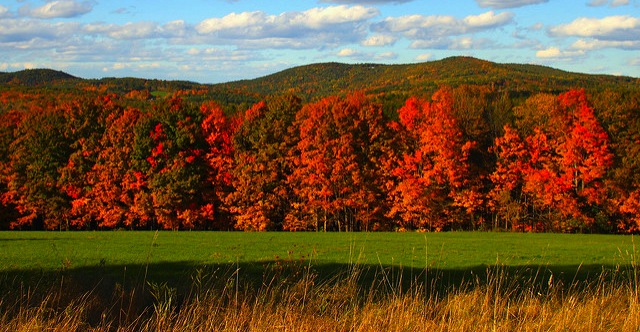 CHARLESTOWN, N.H. (AP) — Over time, pieces of land often get fragmented: parcels get sliced, sold, developed and sometimes fenced off.

Charlestown residents Christina and Harvey Hill have toiled against that trend. Instead of dividing their property, the couple seized opportunities to purchase parcels that abutted the lands passed down by their families. Over the decades, they acquired a huge swath of forest and farmland in Charlestown, Claremont and Unity, contained within a roughly 8-mile perimeter.

Now, in the name of conservation, they’ve given nearly all of it away.

Keeping 27 acres for the home they built in 1989, the Hills donated the remaining 1,100 acres to the Upper Valley Land Trust for permanent conservation — the largest donation in trust history, representing new reach into the southernmost point of its service region and protections for what the Hills say would otherwise be “highly developable” land.

“There’s some phenomenal views from various locations, just gorgeous, gorgeous views,” Christina Hill, 64, who goes by Chris, said on Sunday at their hilltop home, a few minutes’ drive from the Morningside Flight Park.

A retired occupational therapist, Chris Hill spent several years of her youth living on a piece of the property previously owned and farmed by her father, Charles Richardson.

“Both Chris and I think about our dads,” added Harvey Hill, 81, who worked in paper manufacturing and was owner-publisher of the Eagle Times in Claremont for more than a decade, until 2009. “(Conserving it is) what they would have wanted.”

A drive around the property showed signs of spring on Sunday.

“We’ve been through a couple mud seasons already on this road” this year, Harvey Hill joked.

The land will be known as the “Up on the Hill” conservation area because his father, Dwight, a dairy farmer on River Road, would sometimes tell his mother, Inez, that he was going “up on the hill” to land that was passed down from Harvey Hill’s grandfather, a dairy farmer who relocated there from Weathersfield Bow.

The donation was finalized on paper in December, but will take shape in the coming months as the warm weather allows volunteers to improve access points and host educational courses, among other plans, said Upper Valley Land Trust President Jeanie McIntyre.

Although the property has not been appraised, McIntyre said she suspected the gift was not only the largest the trust has received in terms of acreage, but also in potential dollar value were the land to be developed, with multiple sites fit to be built on. She declined to estimate a dollar value but called it “very significant, very valuable.”

Christina Hill also declined to guess a market price: “To me,” she said, “it’s invaluable.”

Nearly half of the property has been ranked as highest quality habitat in the state or region by the New Hampshire Fish and Game department’s Wildlife Action Plan, according to a news release from the trust. It’s particularly valuable to the trust, McIntyre said, because of the Hills’ sustainable forestry practices.

Oftentimes, donated land has been “overharvested” and needs a long period of regrowth, but not so with the Hills’ land, which was also donated by Harvey Hill’s son, Scott.

“So their gift of this land, it’s a gift of a healthy forest that is growing and producing income . and it provides a really great opportunity for us to own a piece of land and showcase to the public that kind of forest stewardship,” McIntyre said.

The size and quality of the land provides “all sorts of teaching opportunities for people,” McIntyre said, from demonstrating thoughtful timber harvesting and related activities, to identification courses for natural resources, plants, winter trees and animal tracking — all without concern about overbooking participants due to space.

Charlestown Planning Board member Sharon Francis — a friend and neighbor of the Hills — said she envisions school teachers taking their classes “up on the hill” and outdoors lovers using the land to “put, put, put through the forest.”

“People have a really big forest to get out and explore and learn and open their eyes,” said Francis, a former director of the Connecticut River Joint Commissions, a collaboration between the Twin States’ respective preservation commissions.

It was a vision shared by Chris Hill, who said she hoped the land will provide an alternative to touch-screen “tablets” that children are so often drawn to these days.

Farmland will continue to be farmed for corn and hay by farmer Gary LeClair, of Claremont, through a lease agreement with the trust.

The Hills said a snowmobile and ATV trail runs through a portion of the property in Claremont, and the land is open to hunting with written permission.

McIntyre said the donation is also unusual because of a cooperative agreement the Hills entered with the land trust.

Oftentimes, property owners maintain ownership but grant the trust a conservation easement, or else leave the property to the trust in their wills.

In this case, the fact that the Hills donated the property in their lifetimes allows them to see the conservation in action, McIntyre said. The Hills will also play a “real active role” in advising the trust on forest management activities, McIntyre said, as is outlined in the agreement.

“For those of us who work on this, it’s just inspiring,” McIntyre said. “They’re such generous and thoughtful people who care so much about the land, and the natural community and human community that benefits.”

Christina Hill said protecting nature from development made sense to her and her husband.

“They’re not making any more land,” she said.