Home » Unravelling the workings of a major bee pest 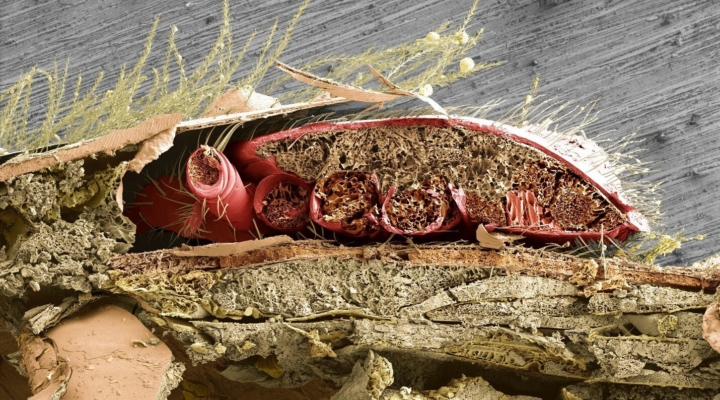 An image showing a cross section of a varroa mite feeding on a honey bee's abdominal cavity is one of several ARS microscopy images changing what we know about how mites damage honey bees. (Courtesy Photo)

WASHINGTON — Research by scientists at the Agricultural Research Service (ARS) and the University of Maryland released today sheds new light — and reverses decades of scientific dogma — regarding a honey bee pest (Varroa destructor) that is considered the greatest single driver of the global honey bee colony losses. Managed honey bee colonies add at least $15 billion to the value of U.S. agriculture each year through increased yields and superior quality harvests.

The microscopy images are part of a major study showing that the Varroa mite (Varroa destructor) feeds on the honey bee’s fat body tissue (an organ similar to the human liver) rather than on its “blood,” (or hemolymph). This discovery holds broad implications for controlling the pest in honey bee colonies.

The study was published on-line Jan. 15 and in today’s print edition of the Proceedings of the National Academy of Sciences. An image produced by the ARS Electron and Confocal Microscopy Unit in Beltsville, Maryland is on the cover of today’s journal.

Varroa mites have been widely thought to feed on the hemolymph, of honey bees (Apis mellifera) because of studies conducted in the 1970’s which used outdated technology. But today’s collaborative study, by University of Maryland and ARS researchers at the ARS Electron and Confocal Microscopy Unit, offers proof of the mite’s true feeding behavior. Through the use of electron microscopy, the researchers were able to locate feeding wounds on the bee caused by the mites, which were located directly above the bee’s fat body tissue. The images represent the first direct evidence that Varroa mites feed on adult bees, not just the larvae and pupae.

In addition, University of Maryland researchers conducted feeding studies and found that Varroamites that were fed a diet of fat body tissue survived significantly longer and produced more eggs than mites fed hemolymph. The results show, mites fed a hemolymph-only diet were comparable to those that were starved. Thus, proving conclusively that the Varroa mite feeds primarily on the fat body consumed from bees.

The results are expected to help scientists develop more effective pesticides and other treatments to help bees cope with a mite known to spread at least five viruses. They also help explain why Varroa mites have such detrimental effects on honey bees, weakening their immune systems, and making it harder for them to store protein from pollen and survive through the winter.

The study was part of the Ph.D. thesis of Samuel D. Ramsey from the University of Maryland and was conducted in collaboration with ARS researchers and study co-authors Gary Bauchan, Connor Gulbronson, Joseph Mowery, and Ronald Ochoa.

The study can be found here.

Stray cows to be bar coded in Indian state