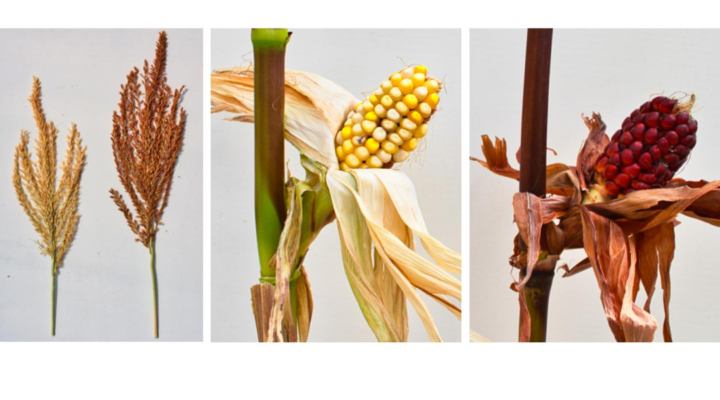 Researchers believe the mystery gene that triggers the mutant red pigments in corn may be a "master regulator" responsible for an over-accumulation of sugars in the leaves and an increase in a natural insecticide in the silk. (Surinder Chopra Research Group/Penn State)

CENTRE CO., Pa. — In discovering a mutant gene that “turns on” another gene responsible for the red pigments sometimes seen in corn, researchers solved an almost six-decades-old mystery with a finding that may have implications for plant breeding in the future.

The culmination of more than 20 years of work, the effort started when, in 1997, Surinder Chopra, professor of maize genetics at Penn State, received seeds from a mutant line of corn. At the time, Chopra was a postdoctoral scholar at Iowa State University, and he brought the research with him when he joined the Penn State faculty in 2000.

The mystery involved a spontaneous gene mutation that causes red pigments to show up in various corn plant tissues, such as kernels, cobs, tassels, silk and even stalks, for a few generations and then disappear in subsequent progeny. It might seem like a minor concern to the uninitiated, but because corn genetics have long been studied as a model system, the question has significant implications for plant biology.

“In corn, genes involved in pigment biosynthesis have been used in genetic studies for more than a century — pigmentation in corn is a relatively simple trait, which makes it ideal for use as a marker for genetic research,” Chopra said. “The mutant corn plants were identified in 1960 by Dr. Charles Burnham (University of Minnesota), and that seed was given to one of his students, Derek Styles. We received the seed from Styles in 1997, and we were entrusted to continue the research.”

Chopra led efforts to introgress the genes from the mutant corn, dubbed Ufo1 — Unstable factor for orange1 — into various inbred corn lines to be studied. Since he came to Penn State, Chopra’s research group in the College of Agricultural Sciences has grown and backcrossed lines of corn plants at both the Penn State Agronomy Farm and in greenhouses on campus. In the last three years, the researchers, who recently published their findings in The Plant Cell, have grown more than 4,000 of the backcrossed plants to map where the cause of Ufo1 is located in the genome.

Using tissues from those hybrid plants, and employing RNA-sequencing techniques and gene-cloning tools along with next-generation sequencing, genetic mapping, and data-analysis capabilities not available to plant geneticists until relatively recently, researchers unmasked the culprit in the on-again, off-again, red-pigment-in corn mystery. They found Ufo1, which is only present in corn, sorghum, rice and foxtail millet.

But the Ufo1 mutant gene does not actually cause the red pigments to appear in corn — that is caused by a gene called the pericarp color1, or p1. Researchers found that the Ufo1 gene is actually controlled by a transposon — “jumping gene” — that sits close to the Ufo1 gene. Transposons are sequences of DNA that move from one location in the genome to another, and can influence the expression of nearby essential genes.

When this transposon is switched on, the Ufo1 gene is also turned on, which triggers the p1 gene to signal the plant to produce the red pigments. But when the transposon is off, the Ufo1 gene goes silent and so does the p1-controlled pigment pathway. That is the main reason the Ufo1 gene went unidentified for so long and the mystery persisted, according to Chopra.

“We were able to narrow it down to a single gene out of several thousand genes that are aberrantly expressed in the Ufo1 mutant versus the wild-type plant,” he said. “It is an incremental discovery, and yet it is a leap in basic science because it is likely to be valuable to plant breeders.”

It is still not entirely clear how Ufo1 interacts with the p1 gene. The discovery’s future significance likely will be less associated with red pigments than what the Ufo1 mutant gene controls in corn plants. Chopra believes it may be a “master regulator” that, when overexpressed, signals the plant that it is under stress, even in the absence of stress. Interestingly, Chopra pointed out, in Ufo1 plants, sugars over-accumulate in leaves, and the content of maysin, a natural insecticide made by corn plants, sharply increases in the silk.

“Learning about what controls the regulation of the normal or the non-mutant Ufo1gene will bring us much closer to a realistic breeding process in which we can tinker with gene expression to get higher maysin content or increased sugar content, which would be important in crop protection from pests and biofuel production, respectively,” Chopra said.

“And, because it has a pronounced effect on the workings of the cellular machinery, we can now understand further the basic molecular pathway that normally happens during a stress to a plant,” he said. “Understanding plant stress resulting from extremes of heat, cold and water is important because of climate change.”