Home / Nebraska / UNL recognizes future Huskers
A new user experience is coming! We'll be asking you to login to your Morning Ag Clips account March 1st to access these new features.
We can't wait to share them with you! Read more here. 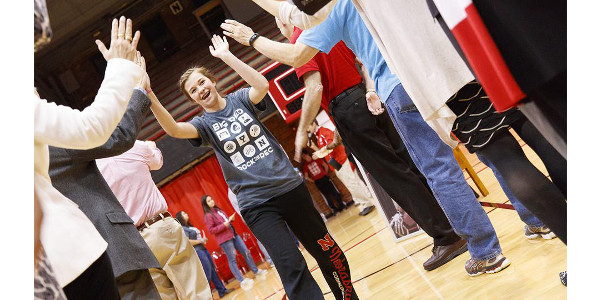 Katelyn Bendorf, an FFA member and University of Nebraska-Lincoln commit, receives high-fives during the signing ceremony April 6 at the Coliseum. (Craig Chandler I University Communication)

LINCOLN — The University of Nebraska-Lincoln recognized 78 students from Nebraska FFA chapters April 6 who have committed to attend the university in the fall. The inaugural signing ceremony was part of the 89th Nebraska FFA State Convention in Lincoln.

“It has been wonderful to see so many on campus this week that are excited about agriculture and excited about science,” Boehm said. “We’re thrilled to welcome you to the Husker family and to the industry.”

The event took place just a few hours after Ronnie Green was installed as the university’s 20th chancellor. Plowman told the FFA members about a special connection they have with Nebraska’s new leader.

“It’s a great time to be a Husker. Today we installed a new chancellor who was not only involved in FFA, but he was also an FFA state officer,” Plowman said. “Chancellor Green and all of us at the university celebrate you and your commitment to come to campus this fall.”

Following the opening remarks, John Baylor, the voice of Husker volleyball, announced each student along with their hometown and intended major. As the names were announced, they were met with cheers from their fellow FFA members in the crowd. After the students signed a large N, Boehm, Plowman and the other dignitaries lined up to congratulate them with high-fives.

“I’ve always loved the atmosphere at Nebraska, and this event gets me even more excited to come here this fall,” said Eric Kovarik of Alma, who participated in the event. He plans to major in turfgrass and landscape management at Nebraska.

Heidi Borg of Wakefield didn’t look at other colleges when deciding on her academic future. She calls herself an advocate for agriculture and plans to major in agriculture business at Nebraska.

The state convention brought over 7,000 FFA members, advisers, parents and guests to Lincoln. It featured educational sessions, workshops, a career fair, a leadership academy, interviews and leadership skill sessions. The events are designed to prepare high school students for careers in agriculture, Nebraska’s largest and most essential industry.

Where will all the ash trees go in Lincoln?