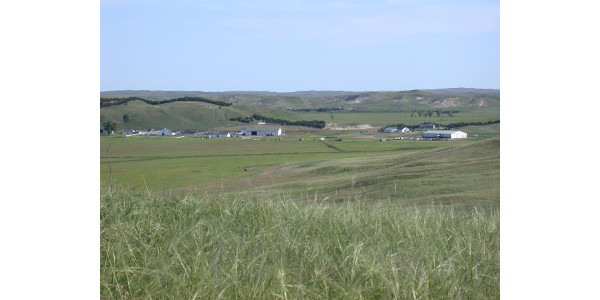 A new study by University of Nebraska-Lincoln rangeland ecologists found that within two years, the vegetation growing on the burned ground was virtually indistinguishable from unburned grassland. It also provides evidence to dispute the prevalent perspective that Sand Hills grassland is highly vulnerable to destabilization from wildfire in a drought, the researchers said. (Courtesy of University of Nebraska-Lincoln)

OMAHA, Neb. (AP) — The one-two punch of extreme drought and the worst wildfire year on record in the Sand Hills five years ago sparked fears that the grass-covered region would be reduced to a dust bowl of drifting dunes.

But the tipping point didn’t arrive.

A new study by University of Nebraska-Lincoln rangeland ecologists found that within two years, the vegetation growing on the burned ground was virtually indistinguishable from unburned grassland. It also provides evidence to dispute the prevalent perspective that Sand Hills grassland is highly vulnerable to destabilization from wildfire in a drought, the researchers said.

The report suggests that state and federal officials change their management policies because the Sand Hills are more resilient than previously believed.

Dirac Twidwell of UNL’s agronomy and horticulture department goes as far as saying that highway signs calling for rangeland fire prevention send a false message about fire’s threat to the Sand Hills.

“The Sand Hills recovered remarkably fast — that’s what grasslands do,” said Twidwell, a co-author of the report. “They thrive with fires.”

The Sand Hills of north-central Nebraska are one of the largest contiguous grasslands remaining in North America and are the traditional heart of the state’s cattle empire, the Omaha World-Herald reported. The area is the largest stabilized sand dune ecoregion in the Western Hemisphere, and is at high risk of wind erosion.

The researchers studied fire’s effects on more than 35 square miles of grassland used to graze bison north of Johnstown at the Nature Conservancy’s Niobrara Valley Preserve. The site — at nearly 60,000 acres it’s one of the organization’s largest preserves worldwide — is along a 25-mile stretch of the Niobrara River east of Valentine.

The preserve has two herds totaling more than 500 bison. It also leases grassland to local ranchers to graze cattle.

Twenty-one square miles of the preserve’s bison pastures burned during the July 2012 Fairfield Creek Wildfire. The fire coincided with a historic nine-month drought. Precipitation during the period was 72 percent below normal.

Temperate grasslands like the Sand Hills are among the most threatened ecological systems on the planet, and Twidwell has been at the forefront of studying why they are disappearing.

He also is among an international network of scientists showing that attempts to remove fire from grasslands has made the wildfire problem worse, not better. Instead, science-based land management — including prescribed burns to reduce overgrowth and invasive species like eastern red cedar into grasslands — is crucial to preventing large, out-of-control fires that threaten life and property, he said.

The UNL report concludes that overgrazing and long-term declines in rainfall during mega-droughts pose greater threats for erosion to the Sand Hills than fire.

In fact, the absence of fire may cause more lasting problems for the Sand Hills by allowing woody plants such as eastern red cedar to overrun the region, Twidwell said.

The report was published in Rangeland Ecology & Management. The work was supported by funding from the Nebraska Environmental Trust.

“In the Sand Hills, fire is a four-letter word,” Arterburn said. “Combine drought with fire and it’s not a good thing from a ranching perspective because it removes all the forage. There’s already less production because of drought stress, and then a fire removes everything else. This fire burned so intensely that it almost neutralized the soil.”

Arterburn said some ranchers and researchers assumed that the combination of drought and fire would destabilize the dunes and that blowing sand would drift across the landscape.

The Sand Hills, however, quickly rebounded.

In the second and third years after the fire, Arterburn and others painstakingly gathered 400 samples of plant material from burned and unburned patches of the bison pastures.

In 2014, researchers clipped vegetation to the ground, sorted it according to whether it was living, last year’s growth, or litter. They dried it to remove all moisture. They then weighed the samples to calculate the biomass differences in burned and unburned areas. They repeated the process the next year.

Even when combined with drought, the fire did not destroy the mass of roots below ground, the authors said. Nor did the fire change the type of plants growing in the region dominated by perennial grasses.

“We don’t want to take it for granted,” he said.