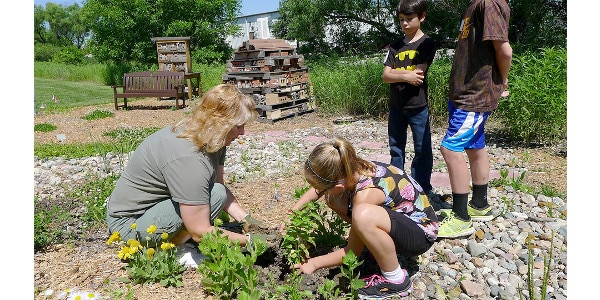 Frogge’s day-to-day responsibilities include supervising the Master Gardener program in her five counties, where volunteers ranging from teens to octogenarians learn the fundamentals of botany, soil science, pests and plant disease over the course of a 40-hour training period. (Courtesy of UNL)

LINCOLN — Mary Jane Frogge may not have pictured herself as a future University of Nebraska–Lincoln employee, but she began as the picture of a future Husker student.

Grew up on a farm near Ashland that raised purebred swine. Spent her youth in 4-H and FFA. Had friends who were enrolling at Nebraska.

“I knew that’s where I wanted to go,” she said. “I really wasn’t interested in going anyplace else.

“I wanted to be a forest ranger. But when I got to the university, my adviser, who was a forester, said, ‘Oh, there are too many forest rangers (already).’ And when you’re a kid, you just go, ‘All right, well, new plan.’”

Frogge took a year to reassess. If forestry wasn’t to be, well, she still wanted to work with plants. She eventually turned to horticulture, earning her bachelor’s in 1988. As certain as she’d been of attending Nebraska, though, she was equally certain that she wanted to see what lay beyond its borders.

“I was thrilled to be done with school,” she said. “My plan was to move away and do something different. I was looking at botanical gardens, and I found an internship in Ohio. So I moved pretty soon after I graduated. I was looking for something new, an adventure.”

With about three months remaining at the internship, home came calling in the form of Jay Fitzgerald, her first horticulture instructor at Nebraska. The university was seeking a new horticulture extension assistant. Was she interested?

Frogge wasn’t sure, but she was coming home for the holidays, so she applied. Just before heading back to Ohio, she checked in on the status of the job. It was hers if she wanted it.

Thirty years on, Frogge is still at Nebraska, having reached a mile-marker that few Husker employees ever do. Her title has changed a bit, from extension assistant to associate. Her responsibility, too: She began by overseeing just Lancaster County before Seward, York, Otoe and Cass joined the mix. But she said the basic outreach tenets of Nebraska Extension and her job — promoting horticulture and educating local communities on how to practice it — have guided her throughout.

Frogge’s day-to-day responsibilities include supervising the Master Gardener program in her five counties, where volunteers ranging from teens to octogenarians learn the fundamentals of botany, soil science, pests and plant disease over the course of a 40-hour training period. Those volunteers — about 80 strong right now, with around 10 joining annually — answer calls, organize events and visit county fairs to share advice with local Nebraskans looking to turn their thumbs green.

She also helps educate youth, especially the 8- to 19-year-olds in 4-H but occasionally even preschoolers, about horticulture, wildlife, forestry and the like. As part of a 4-H horticulture club, Frogge recently brought kids to the Backyard Farmer Garden on East Campus, where they learned to harvest vegetables just as the Master Gardeners do before donating them to local food pantries. Their parents tagged along, too.

“So they could see how big things got or what needed full sun and just get an idea of what might be good for their garden or landscape,” she said.

In the past five years, Frogge has helped develop another program she’s especially proud of: the Nebraska Pollinator Habitat Certification. To become certified by the program, which already counts more than 120 habitats around the state, applicants cultivate plants from a pollinator-friendly list across the spring, summer and fall. They also provide ample water and shelter while limiting the use of pesticides that can harm bees, butterflies and other pollinators that populate Nebraska.

“Nebraskans are really beginning to understand the importance of pollinators and how they affect our food system, our environment, our wildlife, our health,” Frogge said. “Instead of asking, ‘What do I spray for my pest problem?’ they now ask, ‘What can I do that won’t hurt the bees?’”

Frogge said she’s been especially keen on promoting the planting of flowers, shrubs and trees that, like her, are native to the Cornhusker State.

“So many people will call and say, ‘I’ve got this plant, and it’s got this disease or this insect problem.’ There’s usually a similar plant that’s native and will be just as pretty,” she said. “It’s adapted to our soils and to our climate, and you won’t have all these maintenance issues. So people are learning, and it’s neat. It’s neat to see the use of native plants again.”

Central to that program and others has been the emergence of the internet, which Frogge called the most sweeping change from 1990 to 2020. Though the websites she oversees are designed to serve Nebraskans in her region, Frogge said her office commonly gets calls from Scottsbluff, Valentine and other spots in western Nebraska. Once in a while, she’ll hear from someone in Kansas or Texas who stumbled across a Nebraska Extension webpage.

Not that she’s complaining. Overall, she said, the digital age has helped her help whoever does happen to reach out.

“I could think of one time that I was talking to someone on the phone, and they were sending me pictures of what the problem was with their plant,” she said. “I was able to look at the pictures while still talking to them on the phone, saying, ‘Can you get a closer picture here?’ And then we could diagnose what the problem was (in real time). That, we couldn’t have done 30 years ago.”

If she were only answering calls or giving presentations, only working with youth or adults, only consulting on gardens or natural landscapes, the job might have gone stale at some point, she said. But she doesn’t, so it hasn’t.

“I like the diversity of it,” she said. “Just having those different opportunities makes it interesting, because each week is a little different, and each season is a little different. And with nature and the environment, things are changing. We may have a certain pest problem this year, but next year it’s something else. You’re always needing to be current. You’re always learning and then sharing that with people, which is fun.”

For whatever ways the world and her job may have evolved over the past three decades, Frogge said Nebraska Extension’s commitment to meeting people where they are — to listening, to addressing specific questions with personalized answers — hasn’t wavered.

“The extension part of land-grant universities, and that basic importance of outreach, has always been there,” she said. “Extension is part of the community. That aspect hasn’t changed at all, in that either directly in person or by phone or email, we’re always available.”