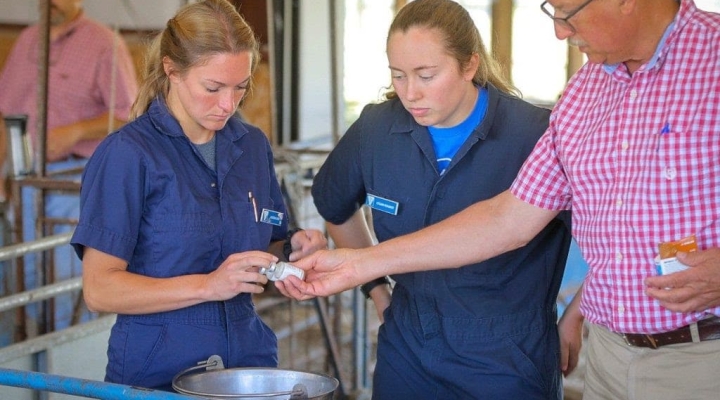 The Southwest Virginia Agricultural Research and Extension Center is giving sheep producers another tool in their efforts to combat parasites in flocks with the annual Ram Test Program in Glade Spring, Virginia. (photo by Virginia Tech University)

BLACKSBURG, Va. — The Southwest Virginia Agricultural Research and Extension Center is giving sheep producers another tool in their efforts to combat parasites in flocks with the annual Ram Test Program in Glade Spring, Virginia.

As the only program in the country that evaluates rams through a forage-based performance test designed specifically to evaluate post-weaning growth and parasite resistance to the barber pole worm, the procedure provides a mechanism for which ram lambs can be evaluated among rams from other flocks in a common environment. The top end of the rams are offered for sale after the testing program ends in September.

The program began in 2012 as an idea based on previous research conducted by David Notter, professor emeritus in the College of Agriculture and Life Science; Scott Greiner, a professor and Virginia Cooperative Extension specialist in the Virginia Tech School of Animal Sciences; and Lee Wright, the superintendent and senior research associate at the Southwest Virginia Agricultural Research and Extension Center, and it rapidly expanded over the last decade. This year, the test has 32 consignors with 128 rams from 10 states, including as far as Florida and Georgia to the south and Missouri to the west.

Since its inaugural year, the test has evaluated nearly 1,000 rams. Several of these rams’ offspring have come to the test for evaluation, which allows researchers to validate data findings from previous years.

Most producers raise the animals to sell as breeding stock, and the benefits are numerous. The biggest advantage, however, is finding the animals that have the growth and parasite-resistance traits, as resistance to the barber pole worm is among the most significant for sheep production as the worm sucks the blood from the animal, causing anemia and potentially death.

The barber pole worms occur naturally in pastures, and if a producer has sheep or goats, barber pole worms will be an issue, especially in the Southeast and mid-Atlantic United States. With the test, producers now know which rams have natural immunity, saving time spent on de-worming and money spent on those products.

“The work we do during the ram test is incredibly beneficial to the sheep industry,” Wright said. “As the only test of this kind in the country, we’ve set a standard for the entire sheep industry that is evident by the effectiveness of the test and the distances producers travel to participate.”

Roxanne Newton of Hound River Farm in Hahira, Georgia, has been sending rams to the test since its inception.

“The test has taken off, and it’s been a world of difference for those of us that have done well in it,” Newton said. “It’s been a fantastic experience from the promotion and sales side as well.”

Newton also has purchased rams from the Virginia Tech test – something that gives her peace of mind.

“I am confident that these rams have been tested adequately for the testing system I use on my farm because I don’t want to take a chance on a ram,” Newton said. “Rams may look good on the outside but may not have any resistance. I know the rams from the Virginia Tech test do.”

The rams that participate in the test are monitored for fecal egg counts, which is an indicator of parasite resistance. The rams are also on a predominantly grass-based diet, but they are supplemented with some grain.

“We want to see how these lambs perform under somewhat natural conditions – grazing, picking up more worm larva and re-infecting themselves – so we can monitor these rams to see which ones are more parasite resistant,” Wright said.

An Abingdon-based large animal veterinarian, Chris Fletcher and his wife, Mandy, have built their flock of sheep at Beyond Blessed Farm from the test at the Southwest Virginia Agricultural Research and Extension Center because of the ability to better select animals.

They started breeding rams purchased from the sale for their parasite resistance. And a few years ago, they achieved a milestone.

“We completely stopped deworming our flock about two years ago,” Chris Fletcher said. “There was just no need anymore. We’re allowing them to have a parasite load that is manageable by the animals themselves because of the resistance.”

By no longer having to deworm, it’s saved Fletcher money and the significant time spent deworming every two weeks.

“You know that if the ram has made it through the test that it is genetically superior,” Fletcher said. “This test is the only one of its kind in the nation, and we’re just blessed to be this close to it.”