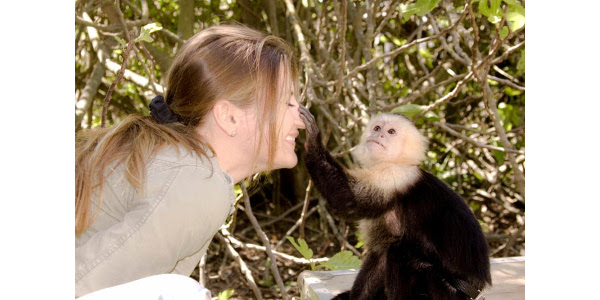 Fairgoers will be in awe of the world champion dogs with their unique tricks and stories, as well as the movie-star monkeys and the educational experiences that come with them. (Courtesy of Clay County Fair)

Fairgoers will be in awe of the world champion dogs with their unique tricks and stories, as well as the movie-star monkeys and the educational experiences that come with them.

“One of our free entertainment goals is to provide unique experiences for our fairgoers,” said CCF Manager Jeremy Parsons. “These two great acts are just a portion of the $180,000 in free entertainment we will be offering at this year’s Fair.”

The Disconnected K9’s has been entertaining audiences since trainer Lawrence Frederick discovered the disc dog world in 1989. The team, which has performed all over the world in many different events, consists of several dogs, many of which have champion titles to their name.

One unique factor of the Disconnected K9’s is every dog on the team is a “rescue” dog, meaning they have come from either abandoned, homeless, sheltered, humane society, etc. backgrounds. Frederick hopes this shows audiences that any dog can become incredible if they are well cared for and shown the love and attention they deserve.

With over 25 years of experience in the animal business, Kevin Keith brings an exciting show to not only entertain, but to enrich audience members’ knowledge about relationships and bonds that exist between animal and man. After a decade working at Marine World, Keith created his own company, Monkey Business Productions, and started the show “Wild about Monkeys” alongside Martina Tamelova-Keith. He and his animal family have accumulated an impressive list of credits that include titles from feature films, television, and commercials. In fact, Mickey, one of the stars of the show, starred next to Tom Cruise in the movie “Rock of Ages” as “Hey Man” back in 2012. Along with these features, “Wild about Monkeys” continues to rate among the highest live animal productions in the nation.