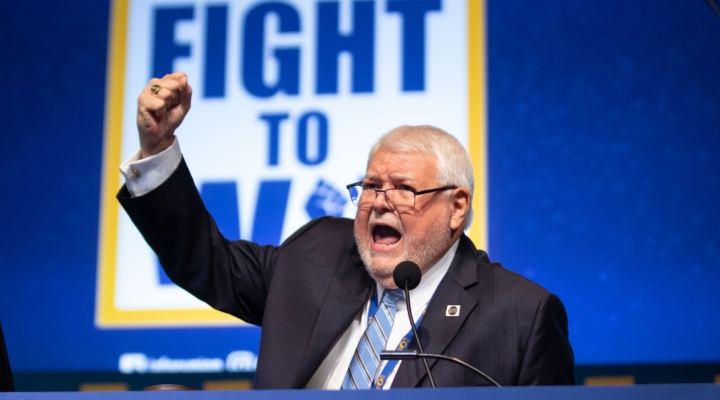 “Employees at ERS and NIFA spoke loudly and clearly by coming together to organize a union and demanding a seat at the table when decisions are made that affect their work – including transferring their jobs outside Washington,” AFGE National President J. David Cox Sr. said. (Courtesy Photo)

WASHINGTON — The U.S. Department of Agriculture’s announcement that it plans to relocate employees at two of its research agencies from Washington, D.C., to Kansas City is a clear attempt to undermine their scientific work, the American Federation of Government Employees said.

Employees at both agencies – the Economic Research Service (ERS) and National Institute of Food and Agriculture (NIFA) – voted overwhelmingly to join AFGE within the past month in response to the proposed relocation.

“Employees at ERS and NIFA spoke loudly and clearly by coming together to organize a union and demanding a seat at the table when decisions are made that affect their work – including transferring their jobs outside Washington,” AFGE National President J. David Cox Sr. said.

“The USDA has provided no rational justification to employees, to Congress, or to its stakeholders for this move, which will make it harder for the agencies to coordinate with other science and research agencies. We will continue to work with Congress and other parties to fight this wrongheaded proposal, which is little more than a backdoor way to slash the workforce and silence the parts of the agencies’ research that the administration views as inconvenient,” Cox said.

Agriculture Secretary Sonny Perdue made the public announcement this morning, just after notifying employees of the move by letter. At a congressional hearing last week, lawmakers heard from three agency stakeholders – a farmer as well as an administrator and professor from two land-grant universities – all of whom were opposed to relocating the agencies outside D.C.

“The researchers and other stakeholders we work with don’t want us to move – they want us to stay right here in Washington, where we can easily coordinate with the other federal science agencies,” said AFGE Local 3403 President Dave Verardo, whose local represents the ERS and NIFA employees.

“Secretary Perdue has stated that his rush to finalize the relocation is an attempt to limit the anxiety and burden on employees. In reality, his announcement today does the opposite by accelerating the loss of mission-critical staff who cannot or will not move to a new location,” Verardo said. “Despite assurances that this relocation is not an attempt to shrink the workforce, we are losing staff and unable to replace them due to this induced uncertainty.”

“Secretary Perdue continually speaks of transparency and communicating to employees but has failed on both fronts,” said Kevin Hunt, Local 3403 vice president for ERS. “The announcement today highlights his disregard for the rights and well-being of employees. Instead of soliciting input from stakeholders or negotiating with bargaining unit employees, Secretary Perdue went behind closed doors to solicit ‘best offers’ and ‘incentives’ from the short-list sites. The announcement today is a clear indication that Secretary Perdue does not have the best interests of federal employees or taxpayers in mind.”