Home / New England / UNH researchers provide guidance for Eastern Spruce Budworm
A new user experience is coming! We'll be asking you to login to your Morning Ag Clips account March 1st to access these new features.
We can't wait to share them with you! Read more here. 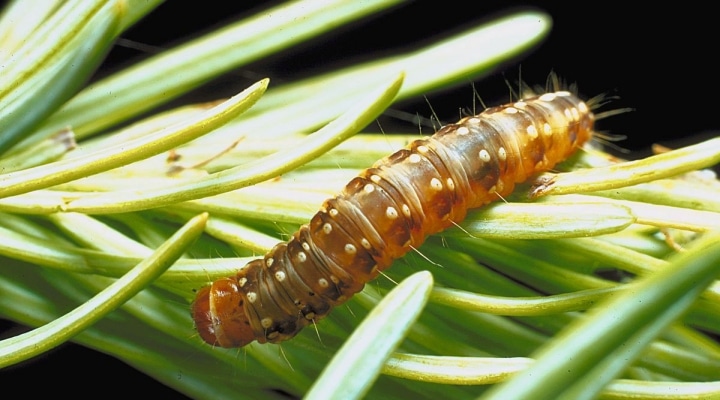 DURHAM, N.H. – The next major eastern spruce budworm outbreak likely will hit Northeastern United States forests over the next few years, putting more than 11.4 million acres of forest and 94.8 million metric tons of stored carbon in spruce and balsam fir at risk. While salvaging these trees for energy or lumber increases carbon dioxide emissions in the short-term, New Hampshire Agricultural Experiment Station researchers have found that certain forest management practices result in long-term benefits that can balance these short-term setbacks.

“Outbreaks from non-native insects such as the emerald ash borer threaten New Hampshire’s forests with widespread loss of native ash trees. Native insects such as the eastern spruce budworm with population cycles that boom every 30 to 40 years also are due again soon throughout the Northern Forest region,” said John Gunn, research assistant professor of forest management at the University of New Hampshire and researcher with the NH Agricultural Experiment Station.

“Given non-native and native pest threats and the potential for more frequent, large-scale destructive events like ice storms in a changing climate, this research aims to understand the carbon implications associated with the decision whether to salvage dead trees after such an event. If keeping carbon out of the atmosphere is a desired outcome, we wondered if it is better to leave a dead trees standing to slowly decompose and emit carbon dioxide slowly, or is it better to harvest that tree and use it for lumber, paper, or energy,” Gunn said.

Forests play an important role in mitigating the effects of climate change. Carbon dioxide moves in and out of forest ecosystems primarily via photosynthesis and decomposition. If more carbon dioxide is moving into the forest system compared to moving out, then forests act as a “sink” of carbon and provide an ecosystem service that benefits humans.

“When an event such as an outbreak of insect pests occurs that kills many trees at one time, landowners who rely on timber revenue often try to minimize financial loss through the ‘salvage’ of dead or dying trees. As New Hampshire forest owners saw following the 1998 ice storm, the decision to salvage dead trees, and how intensely they carried out those salvage harvests had implications for which species grew back, and what kind of quality wood products their land could produce. Now, with a greater awareness of the role of forests for mitigating climate change, it is also important to consider the carbon implications of such harvesting decisions,” Gunn said.

Researchers found that when compared to leaving dead trees in the forest, salvaging dead trees generally results in 10 to 20 years of excess emissions. This occurs because of the slow decay of dead wood and the movement of carbon from decaying wood into the forest floor and, eventually, the soil. However, when salvaged wood is used for energy or lumber, it offsets this increase, though some carbon dioxide is released to the atmosphere immediately, especially when wood is used for short-lived products.

In addition, they found that increased growth and new trees regenerated in the space created by removing dead trees eventually will account for more stored carbon than the trees that once grew there prior to the disease outbreak. Therefore, landowners should weigh the climate change implications of near-term net emissions and economic benefits and potential long-term resilience of forest ecosystem to store carbon when making decisions about salvaging dead or dying trees.

“From a policymaking perspective, that period of 10 to 20 years where emissions are greater because of salvage harvesting is an important consideration. Climate scientists warn that we need to address near-term emissions, so this outcome is potentially at odds with that objective. However, forests in the long term may be able to provide a better outcome if the risk of future disturbances is low and management decisions across the landscape include carbon storage objectives,” Gunn said.

Researchers used regional forest inventory data and 40-year growth and harvest simulations from the USDA Forest Service Forest Vegetation Simulator to develop various forest carbon outcomes for alternative forest management techniques such as salvaging in the Northeastern United States. They performed an assessment of harvested wood products, including bioenergy, to evaluate the full greenhouse gas emissions consequences of salvage and business as usual scenarios across a range of fir and spruce densities for stands in both the presence and absence of spruce budworm attack.

“Much of my research is about understanding how forest management decisions influence the various benefits people hope to derive from forests. Timber, wildlife habitat, and carbon sequestration all are important values to New Hampshire landowners. My hope is to provide science-based guidance on how to manage forests to achieve desired outcomes,” Gunn said.

The research was conducted by Gunn; Mark Ducey, professor of natural resources and the environment at UNH and experiment station researcher; Thomas Buchholz, senior scientist with the Spatial Informatics Group of Pleasanton, Calif.; and Ethan Belair, lecturer in the UNH Department of Natural Resources and the Environment. It is presented in “Forest Carbon Resilience of Eastern Spruce Budworm (Choristoneura fumiferana) Salvage Harvesting in the Northeastern United States” in the journal Frontiers in Forest and Global Change (DOI: https://doi.org/10.3389/ffgc.2020.00014.)

This material is based upon work supported by the NH Agricultural Experiment Station, through joint funding of the National Institute of Food and Agriculture, U.S. Department of Agriculture, under award number 1010675 and 1020142, and the state of New Hampshire. This project was supported by the Northeastern States Research Cooperative through funding made available by the USDA Forest Service and Spatial Informatics Group, LLC.