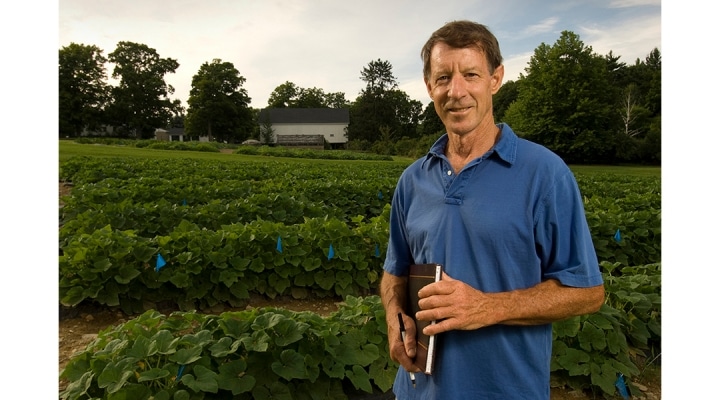 Loy’s love of plants and agriculture began as a child in Utah, where he planted and tended his own vegetable gardens from a young age and, as a teenager, worked on a local truck farm before and after school. He received his bachelor’s in horticulture from Oklahoma State University and master’s and doctorate in genetics and horticulture from Colorado State University. He came to the University of New Hampshire in 1967, where he taught classes in plant genetics and reproduction and vegetable production and mentored many graduate and undergraduate students.

Loy’s experiment station-funded work, which had largely taken place at the Kingman Research Farm, Woodman Horticultural Research Farm, and Macfarlane Research Greenhouses, has resulted in the development of more than 80 new varieties of squash, pumpkins, gourds, and melons during his career. His work represents the longest squash and pumpkin breeding program in North America, and his seed varieties are sold in seed catalogs throughout New England and the world.

Loy’s nutrient-rich crops, seeds, and germplasm research have influenced the harvest of countless farmers while delighting home gardeners and consumers. He served as a professional mentor to scores of undergraduate and graduate students throughout his career.

“Brent was a humble, generous person, and he had a singularly productive career in providing improved cucurbit varieties for the state and region, as well as around the world. It was a very real personal pleasure getting to know Brent over the last dozen years. His work ethic, mentoring of our students, and productive use of our experiment station farms and greenhouses epitomized the land-grant university mission to serve our state and nation. The still-growing list of accomplishments from his long-term breeding program is remarkable. The annually awarded UNH Brent Loy Innovator of the Year Award, and the Big E’s Agricultural Adventurer Award are among the appropriate reflections of his character, his professional career, and of the outcomes that will continue for many years,” said Jon Wraith, dean of the UNH College of Life Sciences and Agriculture, and former director of the NH Agricultural Experiment Station.

Becky Sideman, professor of sustainable agriculture and horticulture production and extension state specialist, said Loy was a wonderful colleague and a good friend who she will miss greatly. “I learned so much from him and am truly grateful to have gotten to know and work with him. His contributions to farmers in the Northeast–and far beyond–are too numerous to count. He is widely admired among growers far and wide. Many of the varieties he developed and released are mainstays on farms and gardens in the Northeast. Just last week, a farmer told me that Slick Pik summer squash is now the only one he grows,” she said.

Loy was one of the first researchers who Maria Emanuel worked with when she joined UNH in 2006 in the Office for Research Partnerships and Commercialization, now UNHInnovation.

“His cucurbit research was a driving force to establish UNH’s technology transfer program. Brent very patiently guided the office and myself over the years to develop an intellectual asset management program that promotes societal benefit, maintains fidelity to the research that yields those assets, and invests in institutional research and scholarship efforts,” said Emanuel, now an affiliate associate professor for large center development and broader impacts with UNH Research, Economic Engagement and Outreach.

“On a personal note, Brent was one of the most genuine, passionate, humble, and funny researchers that I have met. I so looked forward to meetings with him and updates about his research, collaborations, award-winning varieties, and need for lots of experimental field space–and the occasional experiment that he had harvested that day. Brent also shared his love and pride for family, always asking about my family while talking about his beloved wife, children, and grandchildren,” she said.

“We are all fortunate for Brent’s 50-plus years at UNH and the outcomes of his dedicated efforts: research that epitomized the mission of a land-grant institution, novel plant varieties that had both a local and global impact, and inspiring institutional recognition of innovative research. Brent will be sorely missed but enduringly celebrated through his legacy,” she said.

Rob Johnston, founder and chairman of Johnny’s Selected Seeds of Maine, worked with Loy for 41 years. His earliest letter from Loy is dated January 26, 1979.  “He was my most important colleague outside of my own company, Johnny’s Selected Seeds. Brent influenced me through his knowhow in plant genetics and his accomplishments in breeding. But just as important an influence on me was his positive disposition. Brent was usually smiling, even when he complained. Brent leaves a rich legacy. I will miss him,” Johnston said.

UNH Professor Emeritus Otho Wells met Loy in July 1967 and said he had a mission and passion for breeding improved vegetable crops, especially cucurbits. Loy also wanted to develop new cultural methods for vegetable production, which was Wells’ specialty. They teamed up to do research with plastic and paper mulches and row covers.

“For 53 years, Brent was an inspiring team player, forever passionate about his work, and very generous with his time for colleagues and students,” Wells said. “Even though Brent achieved global recognition for his breeding accomplishments, he was never one to toot his own horn. As we sorrowfully say goodbye to an exemplary colleague and personal friend, may his legacy live on.”

Former graduate student Janel Ohletz said Loy’s passion went beyond just breeding squash and melons. “He was kind, patient, and generous with his time. He also seemed to possess unending amounts of energy for field research and would put in long days in the field right alongside students and research techs, and often was the one least tired at the end of the day. He was more than an advisor to me. Brent was a great mentor and his guidance and support were truly a gift. But most importantly, Brent was my friend, and I will miss our long conversations that meandered through a broad range of topics from farming to food, and from plant to politics. He blessed those who knew him with his humble personality, and those who did not with his vast contributions to plant genetics. His legacy will live on through his hundreds of melon and squash varieties that grace dining tables worldwide,” Ohletz said.

Loy was awarded numerous grants, licenses, and royalties in recognition of his cutting edge, extensive research in plant breeding development and plasticulture – the use of plastics in agricultural systems. This innovative research has contributed to the development of new varieties of crops suited for New England and has enhanced farm capacity and viability via enhanced growing season extension.

UNH has executed more than 50 exclusive licenses for inbreds and hybrids developed by Loy. Throughout his career at UNH, more than 200 hybrids and inbreds have been licensed or utilized in trial and germplasm agreements. Royalties generated by this portfolio continue to increase each year, including an expected 10 percent increase from last year. Royalties have generated more than $2 million for the university since commercialization began of these varieties.

He has received numerous honors including the 2015 Vegetable Breeding Working Group Award of Excellence and the 2007 Outstanding Vegetable Publication Award by the American Society of Horticultural Science. In 2011, Loy was named the inaugural UNH Innovator of the Year for his research program and its impact on the university’s commercialization efforts. The award, thereafter, was named the J. Brent Loy Innovator of the Year Award. In 2010 and 2011, he was named a finalist for the Christopher Columbus Foundation Fellowship Foundation Agriscientist of the Year Award and received the Pioneer Award of the American Society of Plasticulture in 2000. Most recently, Loy recently received the Eastern States Exposition’s 2020 New England Fellowship of Agricultural Adventurers Award. Due to Loy’s declining health, a special presentation was made to him June 8 at his home in Epping, by former NH Commissioner of Agriculture Steve Taylor who serves as the Agricultural Adventurers committee chair and a Big E trustee, and Eugene Cassidy, Big E president and CEO.

A funeral service will be held outdoors on Friday, Aug. 14, 2020, at 6 p.m. at Autumn Pride Farm, 176 Hedding Rd, Epping, NH. Strict Covid-19 safety measures will be observed: masks and social distancing will be required. Additionally, no food, drink, or restrooms will be available, as a safety precaution. For those safer at home, or far away, the service will be live streamed and recorded, you can access the stream here: https://vimeo.com/446267420/a9d3e11644. The family requests that if you feel it is dangerous to attend, or feel ill in any way, to please stay home. There is an online guest book to write comments and messages on the Cremation Society of New Hampshire website: https://csnh.com/.

The University of New Hampshire is a flagship research university that inspires innovation and transforms lives in our state, nation and world. More than 16,000 students from all 50 states and 71 countries engage with an award-winning faculty in top ranked programs in business, engineering, law, liberal arts and the sciences across more than 200 programs of study. UNH’s research portfolio includes partnerships with NASA, NOAA, NSF, and NIH, receiving more than $100 million in competitive external funding every year to further explore and define the frontiers of land, sea, and space.