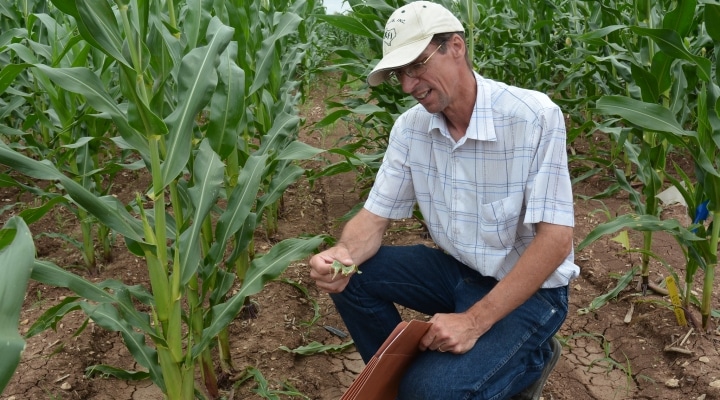 All strobilurin fungicides inhibit fungal respiration by binding to the cytochrome b complex III at the Q0 site in mitochondrial respiration. Simply said, the fungicide works by inhibiting the fungi’s ability undergo normal respiration. The strobilurin chemistries have a very specific target site, or mode-of-action (MOA).

Although highly effective, fungicide chemistries like those in FRAC group 11, with a very specific MOA, are susceptible to fungicide resistance development by some fungi. Why is that? In the strobilurin’s, a single nucleotide polymorphism of the cytochrome b gene leads to an amino acid substitution of glycine with alanine at position 143 of the cytochrome b protein.

For us, knowing the specifics on the technical jargon isn’t so important, it’s understanding what is at stake. So, if we hear someone speak about G143A resistance development to the QoI fungicides (where resistance is already known in cucurbit Powdery mildew and Downy mildew), we know what they are talking about and how important it is! So much so, if cucurbit powdery mildew develops resistance to one strobilurin compound it may develop what is known as cross resistance and become resistant to all chemistries in FRAC group 11, even if only one chemistry has been used!

How do we avoid the chances for fungicide resistance like this to develop? It’s simple, don’t let the fungus ‘figure out’ what it is being sprayed with and do this by rotating different fungicide chemistries (i.e., FRAC groups). Proper fungicides rotations are necessary when fungicides with specific MOA’s are used in fungicide programs for controlling important diseases. That’s why it is important to follow a fungicides label precisely and be certain that some fungicide chemistries aren’t overused.

All strobilurin fungicides should be tank mixed with a protectant fungicide, when possible. Remember tank-mixing high-risk fungicides (i.e., FRAC group 11) with low-risk, protectant fungicides (FRAC groups M1-M9) helps reduce (and/or delay) the chances for fungicide resistance development. Never tank mix strobilurins together and never apply any strobilurin fungicide (either the same chemistry or different chemistry) in consecutive applications if stated by the label. Remember, azoxystrobin acts against the fungus the same way as trifloxystrobin does and so on. Even though you are spraying two different fungicides, each has the similar MOA and is acting against the fungus in the same exact way.

Azoxystrobin (i.e., Quadris 2.08F) used heavily in vegetable production is now off patent and is available in generic forms from a number of companies. In the 2020/2021 Vegetable Crops Recommendations Guide you will see that references to Quadris have been replaced with azoxystrobin, much like we did the chlorothalonil (i.e., Bravo Weatherstik) a few years ago. Over the next couple years other FRAC code 11 fungicides will also be coming off patent and similar changes in the recommendations guide will occur. Resistance to FRAC group 11 fungicides has been reported in multiple pathogens in multiple crops worldwide. Resistance to FRAC group 11 fungicides in our region have been reported in cucurbit powdery mildew and gummy stem blight. Importantly, in recent years, the lack of efficacy in strobilurin fungicides in crops, such as parsley and beet, where azoxystrobin was one of the few fungicides available for Septoria leaf spot control is showing up in areas of southern New Jersey and elsewhere.

The DMI (DeMethylation Inhibitors) or Sterol Biosynthesis Inhibiting (SBI’s) fungicides belong to FRAC code 3 which include the triazoles and imidazoles. Some of these fungicides are commonly known as Tilt (propiconazole), Rally (myclobutanil), Folicur (tebuconazole), and Procure (triflumizole) and are widely-used in agriculture.

DMI’s work by inhibiting the biosynthesis of ergosterol which is a major component of the plasma membrane of certain fungi and needed for fungal growth. Resistance by fungi to the DMI fungicides has been characterized and is generally known to be controlled by the accumulation of several independent mutations, or what is known as ‘continuous selection’ or ‘shifting’, in the fungus.

In any given field population, the sensitivity to the DMI fungicide by the fungus may range from extremely high (highly sensitive, and will be controlled by fungicide) to moderate (partially sensitive to the fungicide) or low (mostly resistant to fungicide).

Unfortunately, it is difficult to determine what proportion of the powdery mildew population is sensitive or not sensitive by just looking at the field until you have begun a proper spray program. The best advice, if you are using low rates and think those rates are not working, is to increase to the high rate the next time the fungicide is sprayed, and if the high rate still doesn’t work it may be safe to assume the fungal population has grown mostly resistant. Importantly, if the high rate fails, whether you bumped up to a high rate or started with one, and control does not seem adequate, DO NOT continue to use the DMI fungicide.

Remember to always tank mix DMI fungicides with protectant (M) fungicides (i.e., chlorothalonil, manzate) to help reduce the chances for fungicide resistance developing. Always apply DMI fungicides according to label rates and resistant management recommendations and always be aware of the fungicide rate you are applying.

How did red algae survive in extreme environments?
November 17, 2020