Home / National / Understanding peppers from around the world
A new user experience is coming! We'll be asking you to login to your Morning Ag Clips account March 1st to access these new features.
We can't wait to share them with you! Read more here. 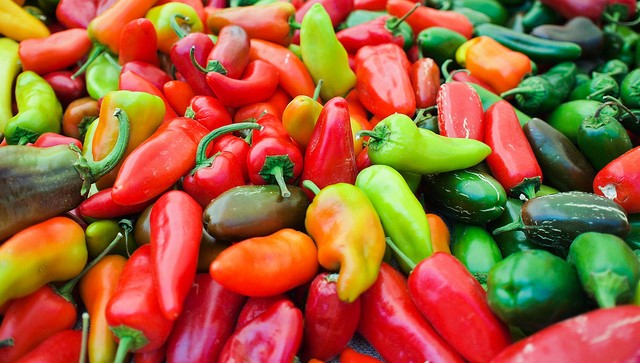 Robert Jarret of the USDA's Agricultural Research Service, Plant Genetic Resources Unit, coordinated the efforts of the 18-member team as they delved into the phenomenon of the global embrace of the breadth and diversity of Capsicum. (djjewelz, Flickr/Creative Commons)

GRIFFIN, Ga. — A comprehensive and multinational review of peppers/chilis (Capsicum species) with academic and scientific input from points across the globe, such as Argentina, Brazil, Taiwan, Mexico, Italy, Hungary, Austria, and the United States sets out to explore various aspects of interest concerning this horticulturally important crop.

Robert Jarret of the USDA’s Agricultural Research Service, Plant Genetic Resources Unit, coordinated the efforts of the 18-member team as they delved into the phenomenon of the global embrace of the breadth and diversity of Capsicum.

Their revelatory findings are illustrated in a comprehensive article entitled “Capsicum – An Abbreviated Compendium” published in the current issue of The Journal of the American Society for Horticultural Science.

Capsicum is a major vegetable and spice crop worldwide. Global production of both fresh and dried fruit continues to increase steadily in terms of area harvested and total yield. Today, Asia currently contributes approximately 65% of the global production of pepper, whereas the Americas, Europe, and Africa each contribute 13.3%, 11.9%, and 10.1%, respectively.

Various topics are addressed within this review, including recent additions to and clarification of Capsicum taxonomy, Capsicum genetic resources, cytogenetic studies, the use of gene mutations to elucidate carotenoid biosynthetic pathways and their regulation, capsaicinoid biosynthesis, and recent advances in whole-genome sequencing and assembly.

Archaeological data allude to the use of Capsicum species as a spice as early as 5500 BCE. The crop was first introduced into Europe by Christopher Columbus during his travels in the 15th century. It later spread to countries in Africa and Asia by way of the flourishing trade routes of Spain and Portugal operating at that time. As it spread around the world, it was quickly adopted and served as a spice and gave rise to many regional varieties.

The increasing value of the pepper crop coincides with its role in international trade. However, the genetic variability with the genus Capsicum manifests itself in its ability to acclimate and produce a crop in a wide range of environments. This is reflected in the number of countries in which it is produced. Fresh pepper is cultivated in approximately 126 countries and dried pepper in approximately 70 countries.

Although developed countries continue to be the main producers of pepper crops, its cultivation provides an important source of income for small producers in many developing countries. The estimated global value of the fresh and dried pepper crops is approximately $30 billion and $3.8 billion, respectively.

Genebanks are viewed as the providers of the raw materials upon which crop improvement activities often depend. Collections of pepper germplasm are available to provide seed of various fruit and plant types and taxa for crop improvement and related research activities. Two of the largest collections of Capsicum germplasm are those of the World Vegetable Center in Taiwan and the USDA in Griffin, Georgia. The WVC and the USDA currently maintain active collections of 8264 and 4953 accessions, respectively.

Capsaicinoids are compounds unique to the genus Capsicum and are responsible for the pungency (heat) of pepper fruit. Aside from their value as a spice, capsaicinoids have well-established medicinal and antimicrobial properties and can affect seed dispersal and survival. Advances in the understanding of the molecular biology of the capsaicinoid biosynthetic pathway often have focused on the identification of new candidate genes, the characteristic of key previously identified genes, and the exploration of possible mechanisms of regulation.

Progress has been evident in conserving and characterizing genetic diversity in Capsicum. However, no thorough assessment of diversity has yet been undertaken. Field studies supported by molecular and cytological/karyological analyses continue to provide new information that advances the understanding of broad taxonomic and genetic relationships.

The potential of the information presented in this review, to augment crop improvement activities, is substantial given adequate resources to employ this information and to improve and expand upon it.

Jarret adds, “In today’s hyper-focused world of specialization, this review article attempts to provide the reader with a multi-disciplinary overview of international research efforts with Capsicum. It is hoped that this review will inform the reader and also inspire increased interest and collaboration among scientists to address the many questions regarding the botany, physiology, genetics, genomics, etc., of this important crop plant (and its related taxa) that remains to be answered.”

Return of frigid conditions on the horizon