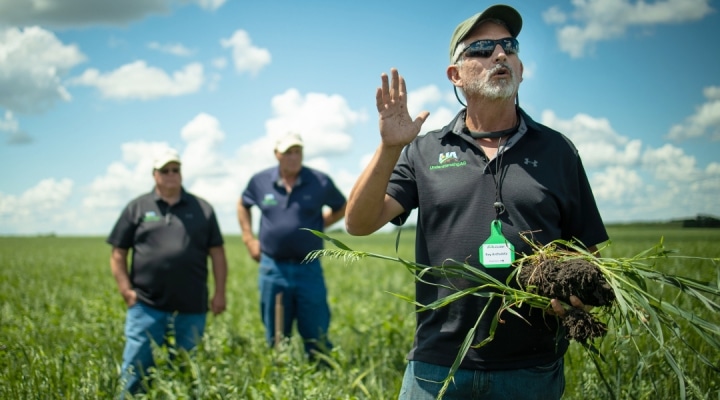 Ray Archuleta, seen here, will be among the cadre of world-renowned soil health and regenerative agricultural farmer/instructors at the Soil Health Academy school April 20-22 in Hillsboro, Tenn.

HILLSBORO, Tenn. — Soil health experts refer to it as the “Holy Grail of fields.”

After it was cleared of trees in the 1940s, this farm field did not experience any tillage and remained in pasture until it was brought into production in 2010. Since then, no tillage has been used and it’s been replete with cover crops since 2011.

“Year-end and year-out it is consistently the most resilient field in the geographical region,” said Adam Daugherty, a district conservationist with USDA’s Natural Resources Conservation Service in Coffee County, Tennessee. “This field has taught us a lot and has given us hope in restoring all of our cropland in this region, as well as others.”

This “Holy Grail of fields” is owned by Robert Henley of Hillsboro, Tennessee. His will be one of three Tennessee farms featured during a three-day, Soil Health Academy (SHA) school April 20-22.

Non-profit SHA schools offer instruction by Ray Archuleta, Gabe Brown, David Kleinschmidt, Shane New, Allen Williams, Ph.D., and other technical consultants, all of whom are widely considered to be among the most preeminent pioneers, innovators and advocates in today’s soil health and regenerative agricultural movement.

The farms of Lewis and Trudy Guthrie in Tullahoma and Adam Daugherty in Manchester will also be outdoor classrooms for the school.

“From the start, Lewis and Trudy Guthrie simply believed in the regenerative principles and have adhered to their implementation,” Daugherty said. “There has been some trial-and-error and on-the-fly adjustments to climatic conditions, but their willingness to adapt and let nature drive the dynamics of their decision making proves that working with nature is much more productive and economical than working against it.”

For his part, Daugherty has worked with dozens of soil-health focused producers in varying climatic, production and economic conditions throughout the country. In addition, he operates his own small-scale farm and produces sweet corn, sunflowers, okra and other products, all of which are grown using regenerative agricultural principles.

SHA’s Ray Archuleta said this school will offer a mix of demonstrations, expert presentations and hands-on experience. “Students will get to see, first-hand, large-scale plantings that will be occurring during the school—from green planting into biomass to planting into previously terminated covers—weather permitting,” he said.

“From small-scale to large-scale producers, everyone who attends this school will see how to put regenerative agriculture principles to work for healthier soil, food and profits,” Archuleta said.

For more information about the school, visit www.soilhealthacademy.org .

Keep illness away from your Super Bowl end zone

Some food contamination starts in the soil