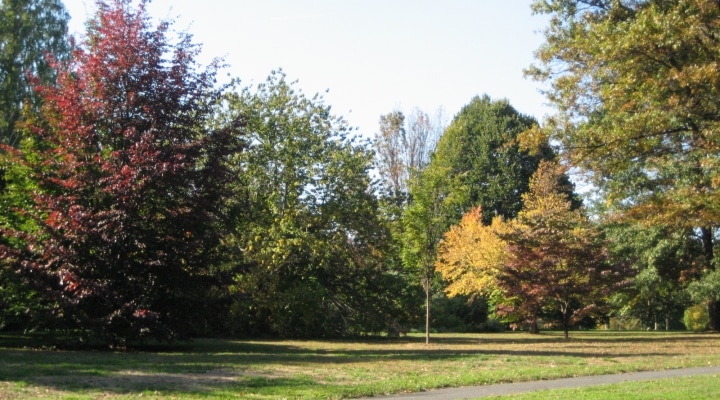 Researchers are studying these urban forests and the natural ecosystem processes happening within them — things like seed germination, regeneration of tree species and decomposition on the forest floor — in order to effectively manage, restore and preserve. (photo by Katia Strieck, Creative Commons/flickr.com)

NEWARK, Del. — Improved mental and physical health outcomes. Increased carbon dioxide absorption and cleaner air. Cooler temperatures in the time of an ever-warming global climate. These are just a few of the benefits of green spaces and forest patches in cities around the world, and they illustrate the importance of protecting these vital landscapes. Researchers are studying these urban forests and the natural ecosystem processes happening within them — things like seed germination, regeneration of tree species and decomposition on the forest floor — in order to effectively manage, restore and preserve.

To better understand urban forest patches in our region, newly published research from the University of Delaware and the United States Forest Service explored species composition and non-native plant invasion in forests across Philadelphia, Newark and the surrounding suburbs.

In 2015, using existing sites within the FRAME (Forest Fragments in Managed Ecosystems) network, a team of undergraduate and graduate students led by Tara Trammell, the John Bartram Assistant Professor of Urban Forestry in the Department of Plant and Soil Sciences, collected field data pertaining to woody plant composition. What they found was unexpected.

“A misconception is that urban forests or urban ecosystems are degraded, that they contain few native species and a lot of invasive plants,” said Trammell. “While that can be true in some cases, in our research, we found no relationship between plant invasion and urbanization.”

Historically, this makes sense. Cities are often established in biodiverse areas because they have more productive soil, land use and food opportunities. Still, identifying the prominence of native species in today’s world is noteworthy because it indicates that these forest patches are able to maintain native species and withstand invasion from non-native plants. All the forests in this study were located within a region with similar biodiversity, thus, the lack of a relationship between urbanization surrounding the forest and invasion within the forest was a unique finding.

“We were surprised to find no relationship between urbanization and invasion, so turned our attention to other factors that could explain the presence of invasive plants in some of the forests,” noted Trammell. “We found the amount of time that the forest canopy had been intact was a factor that could explain plant invasion.”

In the eastern United States, many forests are considered secondary or second-growth forests. During colonial times, forests in our region were cut down at staggering rates. Settlers required timber for fuel and expansion and cleared land was needed for agriculture. As settlers later pushed west, some farmland was abandoned and left to return to the wild. Forests began their second growth and have been slowly returning for centuries, often in patches as development swells around them.

Using the earliest existing photographs available, Trammell and her team examined aerial photos from 1937 through 2010, enabling them to track forest patch growth and approximate when each canopy closed. Older forest patches, meaning those whose canopy closed before the 1950s, had much lower rates of invasion than those that had closed more recently.

According to Trammell, there are several possible explanations for younger forests displaying higher rates of invasion. Non-native species can creep into forests in areas where more sunlight reaches the forest floor.  Whereas closed canopies, like those found in older forests with mature trees, block sunlight from reaching the forest floor, younger forests with open canopies allow more light, potentially creating a welcoming environment for invasion. Alternatively, land use legacies may impact invasion rates. Multiflora rose, a particularly prolific invasive plant, was often purposely planted as a living fence line in agricultural areas during the 1950s. Because it wasn’t used in the earlier 1900s, it does not appear as frequently in older forests as it does in those that closed more recently.

This study could have far-reaching implications for forest management in cities. “A next step in our research is to determine if we can predict invasion based on how long a forest canopy has been intact by analyzing aerial photos,” said Trammell. “This type of work could help identify forests that need invasive species management.”

As part of a longitudinal study in partnership with the Forest Service, the urban forest patches in the FRAME network will be monitored every five years. Barring any unforeseen circumstances caused by the current coronavirus pandemic, a team will be measuring the tree canopies and collecting data on invasion again this summer.

“Understanding the species composition of these forests can give us a better indication of the overall forest health,” Trammell said. “If we want to have healthy forest canopies in twenty years, we need to know which tree species are present and able to regenerate. To maintain our native species that provide so many benefits, these forests are worth our attention and protection.”

Building the Bridge: the “People Side” of Dairying Webinar Series