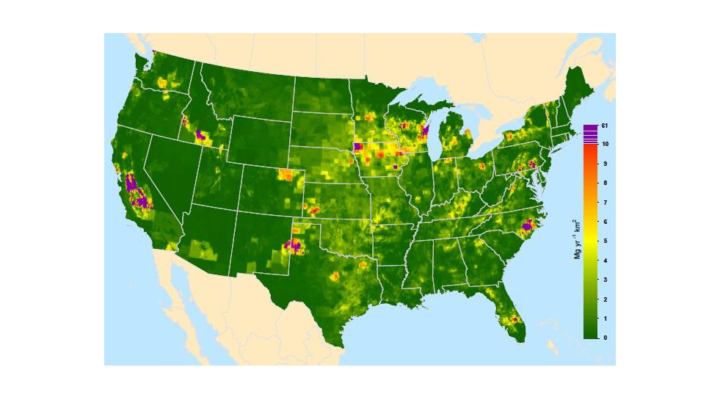 The researchers estimated methane emissions using a "gridded" approach, dividing the US into 0.1- by 0.1-degree GIS units, which created cells from 31 square miles in the northern United States to 42 square miles in the southern part of the country. The study pegged total U.S. livestock methane emissions of 19.6 billion pounds per year. This map shows where they are coming from. (Penn State)

UNIVERSITY PARK, Pa. — A new study of methane emissions from livestock in the United States — led by a researcher in Penn State’s College of Agricultural Sciences — has challenged previous top-down estimates.

The research was conducted because serious discrepancies exist between top-down estimates that suggest the U.S. Environmental Protection Agency is underestimating agricultural methane emissions by up to 90 percent, and bottom-up estimates accepted by the federal government showing lower emissions.

The researchers estimated methane emissions using a “gridded” approach, dividing the U.S. into 0.1 by 0.1-degree GIS units, which created cells from 31 square miles in the northern United States to 42 square miles in the southern part of the country.

“This level of detail enabled us to more accurately assess agricultural methane emissions based on activities involving livestock,” explained lead researcher Alex Hristov, professor of dairy nutrition, who is a member of the current National Academy of Sciences Anthropogenic Methane Committee.

“We must have more specific information about methane emissions that combines local livestock populations and characteristics with distribution of landscape features — and a gridded inventory approach provides that,” he said.

Methane emissions from livestock operations are the result of microbial fermentation and methanogenesis in the forestomach of ruminants and similar fermentation processes in manure from both ruminant and non-ruminant farm animals.

Methane is also produced from enteric fermentation in the digestive tract of non-ruminant herbivore species, such as horses, donkeys and mules, as a result of fermentation processes in their hindgut. However, “hindgut fermenters” do not produce nearly as much methane per unit of fermented feed as ruminants, so enteric or manure emissions from equine species were not included in this analysis. Neither were emissions from small ruminants such as sheep and goats, which are negligible in the U.S.

County-level, annual enteric methane emissions for all states were estimated for cattle only. A total of 3,063 counties in the contiguous U.S. were included in the cattle methane emission database.

Cattle inventories by county were obtained from the 2012 Census of Agriculture, which is the last census data currently available. Body weight data for cattle was derived from EPA records and dry matter feed intake was estimated based on National Research Council prediction equations for the various categories of cattle. Methane emission yield factors were calculated for each cattle category.

Overall, the research, which was published this month in Environmental Science and Technology, yielded total U.S. livestock methane emissions of 19.6 billion pounds per year. However, uncertainty surrounding that total is high, researchers acknowledged.

There is great uncertainty in both enteric and manure methane emissions from livestock, Hristov conceded. He said that research around the world has shown that variability in enteric methane emissions largely can be explained with variability in feed dry-matter intake. Nutrient composition of the feed is also important but has a lesser impact on enteric methane production.

“If methane emissions from livestock in this country really are twice as high as what is estimated now — and we don’t believe they are — that would put a big target on agriculture to take measures to cut these emissions,” said Hristov. “Having an accurate and spatially explicit assessment of methane emissions from livestock is critical for reconciliation of top-down and bottom-up approaches, and it’s the starting point in any mitigation effort.”

“Our analysis showed that the EPA’s estimates are close to reality, but there is a discrepancy in the spatial distribution of emissions. And, our research revealed a great discrepancy with global models such as the EDGAR (Emission Database for Global Atmospheric Research) inventory.”